If the Congress loses this election, which seems imminent, the party will not have been defeated by the BJP but in all likelihood by the Cong itself. 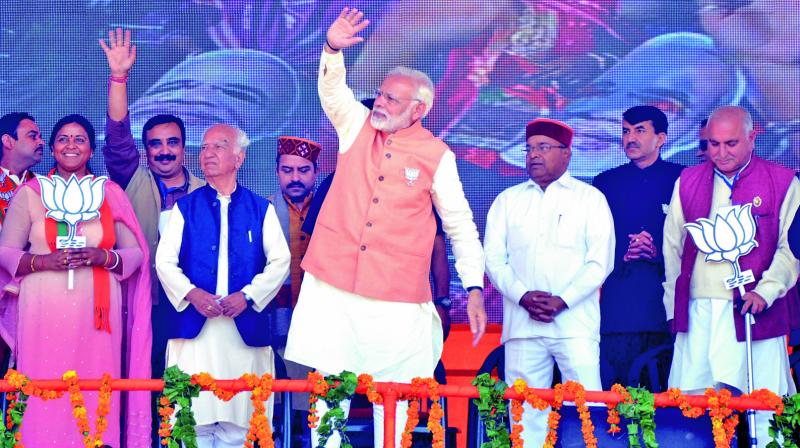 The BJP seems to be heading for another victory in the hill state of Himachal Pradesh, which goes to polls on Thursday, November 9. This is neither because the state has a history of alternate party winning elections since 1990 and now it’s the natural turn of the BJP nor because there is an anti-incumbency mood among voters due to the Congress government’s poor performance, but only because the Congress is in serious trouble with many of its senior leaders shifting to the BJP and in some seats the party faces the problem of rebels. If the Congress loses this election, which seems imminent, the party will not have been defeated by the BJP but in all likelihood by the Congress itself. The incumbent Cong-ress Party is pitted against its own defecting members. The state government doesn’t seem to be very unpopular, approval of the work done by it is reasonable, there are those who are unhappy with the BJP’s demonetisation move and the recent implementation of GST, but the BJP may still be able to prevail simply because the Congress’ house is not in order.

Had it not been for intra-party rivalry, the Congress had a good chance of bucking Himachal’s “power rotation” track record. Such a scenario might have been possible primarily because CSDS’ pre-poll surveys indicated overall that the people of Himachal seemed satisfied with the state government’s performance. Most voters also rated the government’s performance fairly positively on most matters of governance — be it schools, roads, drinking water or electricity supply. Moreover, the survey didn’t find any significant anti-incumbency sentiment prevailing in the state; if anything it was more pro than anti as a large number of voters wanted the government to be re-elected.

But despite this mood, the infighting within the Congress is likely to cause a setback for the party, with a number of prominent leaders shifting to the BJP just before the elections. The most prominent among these are Chetan Parmar, grandson of the state’s first chief minister Y.S. Parmar, a towering political personality, whose legacy is still remembered fondly; and Anil Sharma, who is the son of veteran Congress politician Sukh Ram and had, until his resignation, held a Cabinet position in the state government. Apart from these two important names, Dinesh Chaudhary, a prominent Rajput leader, has also joined hands with the BJP. Additionally, the party also expelled seven rebel leaders, each of whom had filed a nomination in seats where the party had given ticket to a different candidate. Chief among those expelled are five-time elected MLA and former minister Vijai Singh Mankotia, Hardeep Bawa, state president of the Indian National Trade Union Congress, and Purna Thakur, vice-president of HPCC. It is quite probable that the exit of these prominent names will harm Congress’ prospects. The whole confusion with Vidya Stokes, where another candidate Deepak Rathore, widely considered to be a political greenhorn but who is close to Rahul Gandhi, was allotted the ticket first, and the subsequent rejection of Ms Stokes’ application, can also be seen as a self-goal by the party. Vidya Stokes is visibly upset with the party leadership, which will also harm the Congress’ prospects.

In Himachal politics, an incumbent party’s stars are usually not aligned in its favour: Since 1990, any incumbent party — whether Congress or BJP — has not managed to hold on to its majority. The result of this cyclical pattern has been that while the contest is mainly seen between two parties (BJP and Congress), the local leadership of the state has become immensely popular, garnering a steady loyal following. Thus, for both the parties, the current factionalism that is visible can turn out to be dangerous at the polling booth. For the Congress, which is already battling anti-incumbency and the loss of its prominent leaders to the BJP, the factionalism that has emerged as a result of the tussle between Congress state chief Sukhwinder Singh Sukhu and chief minister Virbhadra Singh could prove significant. Mr Sukhu’s supporters, who are annoyed with the Virbhadra Singh faction, can prove instrumental in the vote; as state party chief, Mr Sukhu himself is known to be a popular political figure, and the findings of the CSDS pre-poll survey testifies to this. He is also seen to be close to Rahul Gandhi, whereas the lack of bonhomie between Mr Gandhi and Mr Singh is quite visible. A divided party, which is already battling corruption charges in the state, in addition to worries about law and order, might not be in the most favourable position to be re-elected.

The BJP, however, also doesn’t have easy sailing. Apart from the discontentment among Himachalis about Prime Minister Narendra Modi’s two pet economic moves — demonetisation and GST — which the findings of the CSDS pre-poll survey suggest may put the party in some difficulty; the battle for power that is unfolding between two-time former CM Prem Kumar Dhumal and Rajya Sabha MP J.P. Nadda could prove significant. While Mr Dhumal is a prominent figure in local politics, Mr Nadda is known to be close to Mr Modi and BJP president Amit Shah, a fact which has earlier catapulted other leaders to the chief ministership (Manohar Lal Khattar in Haryana and Devendra Fadnavis in Maharashtra). Mr Nadda is also seen to have the RSS’ tacit approval, while featuring prominently in the list of party’s star campaigners.

The CSDS pre-poll survey also indicates that those who are willing to vote for the BJP in Himachal are more likely to vote on the basis of the chief minister, and Mr Dhumal is the most popular face for the CM’s post. This could mean that snubbing Mr Dhumal might not go down well with his followers. What remains to be seen is how both parties manage the warring blocs, because that could ultimately prove to be more significant than managing the opposite side.