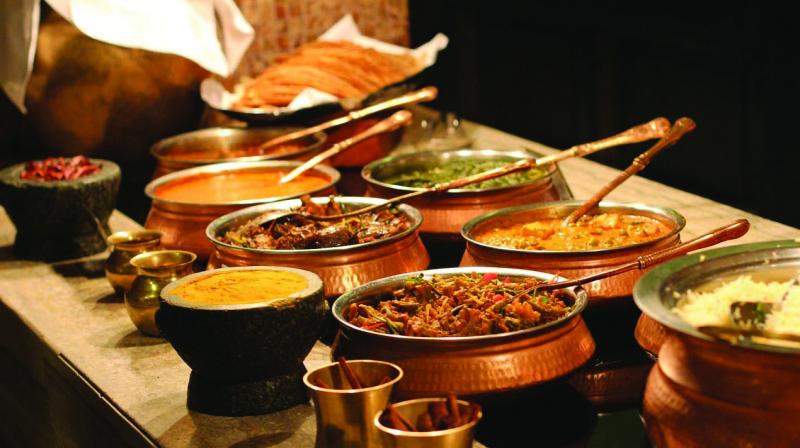 “If love is a game
It’s a bit like chess
You make a move
And she has to guess
Or maybe it’s a bit
Like gambling on horses
You enter with wit
And squander your resources...”
From Hi! Mary Lele by Bachchoo

The Brits have never understood Indian food. Ever since the memsahibs of the Raj began to euphemistically call goats’ meat “mutton”, a distortion which Indians to this day use, the perversions and extortions have prevailed.

There’s “kedgeree” — a sort of British paella with fish and hard-boiled eggs, derived from the khichdi of dal, rice and haldi, which my grandmother would give us when we were poorly. No prawns or boiled eggs were killed or exploited in the process.

Or think of South Indian spicy waters which, lost in transliteration, become Mulligatawney soup sold to this day in Britain in cans. Several surveys assert that “chicken tikka masala” has overtaken roast beef in the Brit popularity stakes.

In my first years as a student in Britain I used to pass the Taj Mahal, the Star of India or even, quite absurdly, the Light of Gurkha, but couldn’t afford to go in.

Later, I became aware that the Star of India should really have been The Star of East Pakistan and The Last days of the Raj should have really been called The First Days of Bangladesh.

When I landed up in London to earn a living I had my first taste of the “Indian” restaurant in Britain. It wasn’t anything like the food mamaiji or our Muslim cook Hukam Ali dished up. It tasted of boiled meat covered with different concentrations of the same masala sauce with “vindaloo” at the acme of chilli-hotness.

There was chicken Ceylon, chicken Madras, chicken Dopiazza among others — and the lamb and prawns got the same regional etc. categorisation. These East Pakistani, later Bangladeshi, restaurants were a culinary pantomime. But the Brits who frequented them felt transported on the magic carpet of 18 points of lager to Ceylon, Madras even to Dopiazza —which they might have tried to locate on a map.

Then another current entered this established flow. There were one or maybe two authentic, snobbish Indian restaurants already and that paucity left a lot of elbow room in the market. And some rushed in. Not that I or the circles I moved in could frequent these new posh establishments, but we could sample them on occasion.

Apart from trying to earn a living writing, I belonged to a radical group which ran a campaigning magazine. Membership entailed pamphleteering, endless meetings, rabble rousing, demonstrations, squatting houses, lobbying or barracking the authorities and police, patrolling the streets with Bengali vigilante youth on the lookout for marauding, “Paki-bashing” racists and then writing it all up.

We’d work into the night and when we got hungry we would frequent a takeaway food bar called the Lahore Kebab House (LKH) for authentic north Indian Kebabs, naans etc. One could eat at the two plastic tables in the one-room-kitchen-cum-sales-counter in the tiny side-street off the Commercial Road, or take the food away.

Through several strokes of luck and the beneficence of powers I don’t believe in, I found some small success through my writing and was subsequently invited into a job in British television. I took it.

Then Britain’s Sunday Times approached me to contribute to a story about which Indian restaurants Indians would eat at or recommend. I asked the interviewer who else they were asking. Salman Rushdie had chosen The Bombay Brasserie, a Taj group eaterie and Ismail Merchant had named Veeraswamy’s.

There were other illustrious names and choices. I chose the Lahore Kebab House (LKH) and in the course of the interview gave my reasons — authenticity, atmosphere, price, the absence of pretension and tablecloths, freedom from the hazard of breaking expensive crockery and one more — of which later.

In the week before publication the Sunday Times called and said they were photographing each interviewee eating at their chosen restaurant and would I be up for it. We made the appointment, the newspaper crew and I, but couldn’t inform the LKH as it didn’t have a phone. I said it would be OK to turn up as the proprietor knew me.

The Sunday Times crew at first couldn’t find the place but finally landed up. They brought reflecting umbrellas, a director of photography and six or seven crew with the interviewing journalist. The LKH, the owner and a cook weren’t amused.

“What’s going on Farrukh, we don’t need any of this, customer turning off, nooksaan ho raha.”

I apologised. He didn’t fully appreciate the power of media and attributed the intervention to his trade to my wanting to be in the papers.

The article appeared very prominently on Sunday. On Tuesday I got a call from LKH’s owner.

“Farrukh saheb what the hell have you done? There are white people lining up round the block and I’ve had to borrow the next door shop and put 10 tables in and hire three more cooks...”

And today a third wave of fancy Indian restaurants has hit town, calling themselves “fusion”, offering limited because exclusive menus, advertising the names of their chefs and charging over a hundred pounds per person for “tasting menus” which include expensive wines.

And yet, for me, the LKH is where I’d go myself and invite my guests. For an authentic, unpretentious meal for which you pay a tenth of what you would in these new designer establishments, it’s still the place. The kitchen behind glass is on show within the now vastly expanded and thriving space. Besides, one brings one’s own alcohol and so a £12 Sancerre won’t cost £47, which the snob-appeal restaurants charge.