In January 2011, in a suicide attack at Moscow’s Domodedovo airport by the Chechens, 37 people were killed. 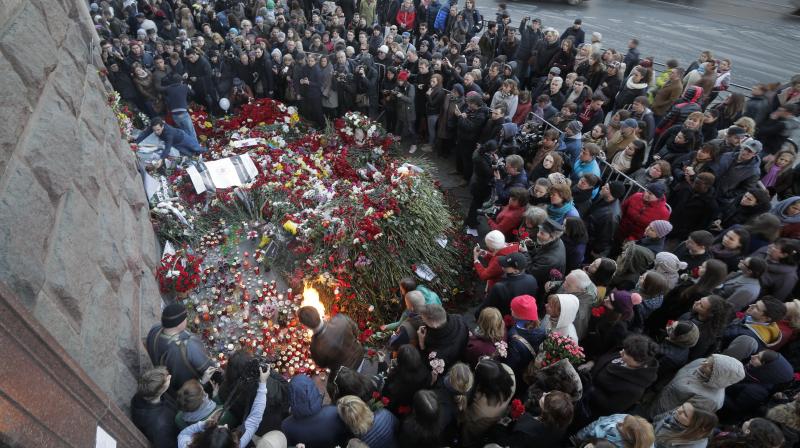 The face of an innocent-looking, slightly cross-eyed boy looks at us from photographs just released by the Russian authorities. This is Akbarjon Jalilov, a 22-year-old Russian citizen, born in Kyrgyzstan, who has been living in Russia for the past six years. He has been identified as the suicide bomber who attacked the Metro between two stations in the historic city of St. Petersburg in the afternoon of Monday April 3.

This attack killed 14 persons and injured around 50 others, many of them quite seriously. A second, larger device was discovered at another station and defused. Investigators are said to be looking for two associates of the bomber. While official sources have so far been cautious about discussing the affiliations and motivation of the bomber, a day after the bombing, six persons are said to have been detained in St. Petersburg on charges of recruiting for “illegal armed groups” in order “to carry out terrorist crimes”.

Though this language hints at a link with the Islamic State of Iraq and Syria (ISIS), there are no suggestions that there are ties between Jalilov and ISIS. However, according to a Russian media source, the security services might have known that a terrorist attack was being planned in St. Petersburg because they had been following a Russian national associated with ISIS, who had been detained upon his return from Syria.

Russia experienced considerable terrorist violence in the 1990s and 2000s, but these were linked to separatist movements in Chechnya and Dagestan. In 2002, Chechen rebels had taken 170 hostages at a theatre in Moscow, and later, in 2004, they had occupied School Number One in Beslan and taken 1,100 hostages; and at least 390 persons were killed in the rescue operation. In January 2011, in a suicide attack at Moscow’s Domodedovo airport by the Chechens, 37 people were killed.

Terrorists associated with the Dagestan struggle were responsible for the suicide bombing at Volgograd station in December 2013, in which 16 persons were killed, followed by an attack on a trolley bus a day later in which 14 were killed. Russia has also experienced violence from ISIS, but this has been outside Russia itself: in October 2015, the Russian Metrojet airliner blew up over the Sinai, in which 224 passengers were killed.

Commentators have noted that, in recent months ISIS leaders have asked potential recruits to avoid coming to the “caliphate”, and instead carry out attacks in their own home countries. There have been several “lone wolf” attacks in different cities over the last year by persons with no direct links with ISIS or other radical groups, who were possibly motivated to violence due to extremist propaganda on the social media.

Such a scenario cannot be ruled out in the case of the St. Petersburg bombing. Russia is home to at least 200,000 legal Central Asian migrants, a similar number of illegals, and three to four million seasonal workers, who work in harsh conditions to support families at home, and frequently suffer discrimination and injustice. They have in the
past flocked to join jihadi groups in the conflict theatres of Afghanistan, Iraq and Syria.

ISIS has had a special allure for Central Asian fighters. A Georgian Chechen, Abu Omar Al Shishani, was a senior field commander in the ISIS forces till his death in a US air attack in July 2016. In 2015, the special services chief of Tajikistan, Gulmurod Khalimov, defected to ISIS; he also urged Central Asian workers in Russia to join the “caliphate” with the words: “Working in Russia, you became slaves of kafirs (non-believers). You’re churki (“dark-skinned”, a pejorative Russian word for Central Asians) for them, nothing more... Do jihad, come to the Islamic State.”

It is estimated that between 1,500-4,000 Central Asians have joined ISIS in Syria and Iraq, with thousands more in Afghanistan with organisations such as the Taliban-linked Islamic Movement of Uzbekistan. With ISIS now under pressure, potential recruits are
available to perpetrate terror at home.

In Chechnya, this has been facilitated by the Chechen independence movement now calling itself the “Caucasus Emirate”, which is seeking to set up a “caliphate” in Chechnya and is calling for fighters from neighbouring republics. This has led some observers to suggest that the St. Petersburg attack could have been a joint ISIS-Chechen initiative.

Besides the Chechen factor, attacks on Russia by radical Islamic groups have been encouraged by the strong military and political support that Russia has extended to the Bashar al-Assad regime in Syria. Not only has Russia boosted the military capabilities of the Assad regime, its Air Force has also carried out massive attacks on ISIS positions across Syria. This has ensured not just the survival of the regime, but also the imminent destruction of “caliphate” itself.

There are reports that some days before the St. Petersburg bombings, some ISIS websites had encouraged attacks on Russia and President Vladimir Putin himself for his role in Syria. One image showed an ISIS fighter standing in front of the Kremlin with the caption “kill them where you find them”, while another encouraged its supporters to launch strikes on Moscow. After the attacks, some Daesh-related websites have shown its supporters celebrating the attacks — an ISIS supporter on the group’s al-Minbar platform wrote: “We ask Allah to bless the operation by the lions of the Caliphate, we ask Allah to kill the Crusaders.” Another claimed that the attacks were revenge for Russia’s attacks on Daesh in Syria.

As the Islamic State collapses in the Levant, its lethal tentacles have reached across several thousand kilometres to wreak vengeance upon its enemies. This has grim portends for the world after the fall of Mosul and Raqqa.