Seeds of diversity, resilience and freedom

Swadeshi seeds have been bred for drought tolerance, flood tolerance as well as salt tolerance. 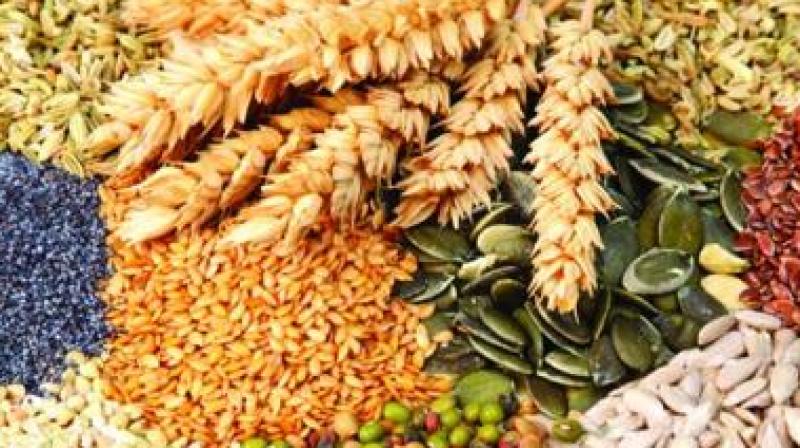 Swadeshi seeds have been bred for nutrition and health, taste and quality. (Representational image)

India is a land rich in biodiversity. For over 10,000 years, Indian farmers have used their brilliance and indigenous knowledge to domesticate and evolve thousands of crops including 200,000 varieties of rice, 1,500 of wheat, 1,500 of bananas and mangoes, hundreds of types of dals, oilseeds, diverse millets, pseudo cereals, vegetables and spices of every kind.

This brilliance in breeding was abruptly stopped when the Green Revolution was imposed on us in the 1960s by the chemical industry with its roots in the war. As in the colonisation of the past, our intelligence in seed breeding and agriculture was denied. Our seeds were called “primitive” and displaced. A mechanical “intelligence” of industrial breeding for uniformity for external inputs was imposed. Instead of continuing to evolve varieties of diverse species, our agriculture and our diet were reduced to rice and wheat.

Our native seeds, with tall straws, did a satyagraha against the intensive chemical inputs. New science is teaching us plants do have intelligence. Intelligence is rooted in the Latin word inter legere, which means to choose. Our desi seeds rejected the chemicals with a strong “no” by lodging in rebellion against the toxic inputs. So Norman Borlaug from Dupont Defence Lab was put on the job of changing the plants to take up more chemicals. This is how the dwarf varieties of rice and wheat were introduced through the Green Revolution. The myth was they produced more food. But as the UN has said, they were high-response varieties and not high-yielding varieties. And as Dr M.S. Swaminathan has admitted, they merely changed the “partitioning” between straw and grain.

Over 50 years of chemical and industrial breeding for uniformity has contributed to four emergencies. First is the growing monopoly on seeds. Chemical giants Monsanto Bayer, Syngenta ChemChina and Dow Dupont have now emerged as a seed cartel, pushing GMO technologies which have clearly failed.

The second emergency is the epidemic of farmers’ suicides due to debt they incur for buying costly seeds and chemicals. No free and sovereign country should allow 300,000 farmers’ suicides.

The third is the malnutrition and hunger crisis resulting from monocultures which displaced our pulses, oilseeds and millets. The rice and wheat produced is nutritionally empty, so we have an epidemic of malnutrition and micronutrient and trace element deficiencies and new food allergies such as gluten intolerance.

The fourth is the ecological crisis of climate change, erosion of our rich diversity, desertification of our soils and severe water crisis. Globally chemical farming contributes 50 per cent of greenhouse gas emissions. Even stubble burning is an externality of the Green Revolution.

Corporations breed seeds for responding to their chemicals. Chemicals need uniform monocultures. Monocultures are vulnerable to the climate change to which industrial farming makes a significant contribution.

GMOs BT cotton was imposed with the claim that it would control pests and farmers would not need to spray pesticide. But it has been seen that BT cotton has clearly failed to control pests.

Rather it has unleashed an epidemic of farmers’ suicides due to debt because of high prices. Farmers are being forced to use more pesticides and hundreds have died due to pesticide poisoning. I visited farmers admitted in the government hospital in Yavatmal due to pesticide poisoning. The chair of the Task Force on the Agrarian Crisis has called BT cotton a killer crop and said Monsanto too is liable for failure.

Navdanya has saved and distributed desi organic cotton seeds to farmers to give an alternative to BT cotton.

Farmers’ seed sovereignty is at the heart of solutions to the epidemic of farmers’ suicides. Only when farmers have access to their own seeds will they be free of debt. Moreover, only through seed sovereignty can farmers’ income be increased.

I started Navdanya 30 years ago to protect our native seeds, our seed sovereignty and our knowledge sovereignty, recognising farmers’ breeding, their brilliance and intelligence. We have started more than 120 community seed banks to make farmers’ varieties available to farmers.

I fought to defend our civilisation’s collective and cumulative innovation from biopiracy. Our neem was patented. We fought the case for 11 years and established biopiracy was taking place. Our “basmati” was patented as an invention of Ricetec in Texas. We forced the US Patent Office to cancel its  claims.

Swadeshi seeds have been bred for nutrition and health, taste and quality. Indian wheat was patented by Monsanto as it does not contribute to gluten allergies. An intervention by Bhartiya Krishak Samaj and Research Foundation for Science Technology and Ecology has helped check biopiracy of desi wheat. Swadeshi seeds have been bred for drought tolerance, flood tolerance as well as salt tolerance. Navdanya has distributed such climate-resilient seeds after climate disasters. With climate change, swadeshi climate resilient varieties will be even more important. There is already an attempt by MNCs to patent climate resilient seeds. Monsanto’s patent for climate resilience was rejected by our patent office because Article 3j of the Patent Law prevents patents on seeds, plants and animals. Monsanto is challenging this in court. To stop this biopiracy, we need keep the climate resilient seeds in farmers’ hands. Breeding for diversity, for nutrition, for resilience to pests, diseases and climate change is the swadeshi breeding strategy that created our rich biodiversity and our rich food and nutrition heritage. This is the scientific breeding strategy we must develop as a sovereign nation, not the colonising strategy of breeding for more chemical use, for monocultures, more vulnerability. At Navdanya, we are rejuvenating the science of farmers’ breeding.

Food begins as seed. Our seed sovereignty (bija swaraj) is the foundation of our food sovereignty (anna swaraj). Our seeds are the seeds of national sovereignty in times of corporate rule, where the seed has become the site for a new colonisation. If we lose our seeds, we will be condemned to eat toxic food, leading to an epidemic of chronic diseases. You become a seed saver by eating organic food from desi seeds because you become a co-producer with farmers to continue to grow the seeds of diversity, freedom and resilience.

Saving, growing and eating desi seeds have become a political, social, economic, ecological, health and scientific imperative. Farmers can have livelihood security through this, while consumers can have nutritional security, taste and quality.

Bija swaraj offers solutions to farmers; suicides, malnutrition and climate change. With our desi  seeds, we can create a new India that is free of poison, free of farmers’ suicides, free of malnutrition. That is the new India we should collectively work towards for 2022.