Uri, Pampore, Nagrota... We must act

The ISI is now extensively utilising the same concept and methodology against India. 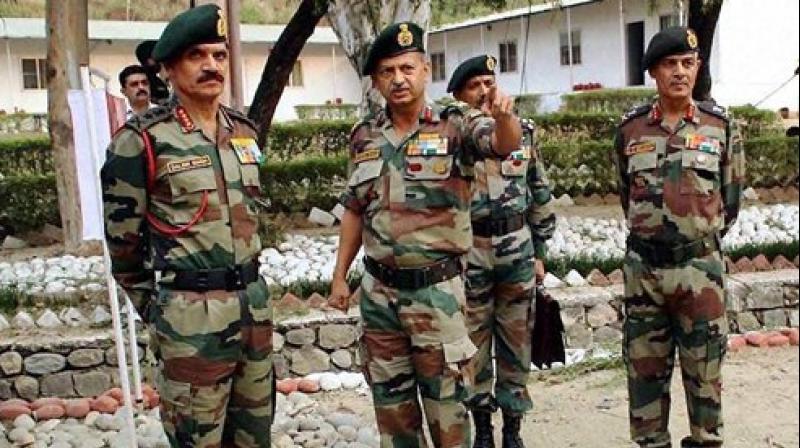 The tandem fidayeen attacks, which had simultaneously targeted Headquarters 16 Corps at Nagrota and a BSF border outpost at Chamliyal near Samba, are the obvious Pakistani response to India’s “surgical strike” in response to the Uri attack. Headquarters, particularly the larger ones, are inherently “soft targets” as indeed are all types of administrative installations and base areas. This was graphically demonstrated during the Pakistani fidayeen attacks on the airbase at Pathankot. The selection of a corps headquarters for a fidayeen “surgical strike” is symbolic and a clear signal that Pakistan has upped the ante. The Indian Army on its part must ensure that its own “soft targets” are adequately “hardened” against such attacks, not only in border areas, but also elsewhere in the interior of the country as well.

Fidayeen are brainwashed suicide squads. These are generally considered as “non state actors”. Hence, their terrorist attacks — though deliberately targeted and launched to achieve military or psychological targets or objectives — always have a factor of “plausible deniability”, a term originally coined by the Central Intelligence Agency for such cross-border operations based in Pakistan against the Soviet Army in Afghanistan.

The ISI is now extensively utilising the same concept and methodology against India. These so-called fidayeen attacks are never hasty or short-notice “opportunity” operations launched at the spur of the moment. Rather, they are launched after detailed and deliberate preparation and planning, as well as local backup support, for which some time is necessary.

The Pakistani attacks at Pathankot, Uri, Pampore and now Nagrota could not have been short-notice efforts and it should, therefore, be a matter of some concern that Indian counter-intelligence agencies or police have been unable to pick up early warning signals in any of these cases and take the necessary pre-emptive action.

It is also a matter of concern that India’s border security agencies too could not intercept either of these groups and prevent their entry into this country. Recurring rumours of local support and sanctuary for the infiltrators by sympathisers and enemy elements already emplaced in India are another disturbing aspect. If there is any rot within the system, it seems to have set in deeply.

The attacks on targets in India’s deep hinterland as disparate as the Taj Hotel at Mumbai or a military headquarters at Nagrota near Jammu have followed a classic pattern of commando-style assaults by well-armed, well-trained suicide groups “hopped-up” on jihadi religious frenzy to immolate themselves on a one-way trip to jannat and its promised delights.

But somewhat disturbingly, even the modicum of prior information sought to have been conveyed by Indian intelligence agencies seemed to have been downplayed by the relevant authorities, both civil and military, and not acted upon. This is a fatal and recurring flaw, which in an age of nuclear terrorism can possibly cost the nation very dearly indeed.

The new incumbent is also rumoured to be “hard on terrorism”, but the context is not known. Going by past impressions, his attitude would most likely be in respect of Pakistan’s domestic jihadis, primarily “bad” terrorists of the Tehrik-e-Taliban Pakistan (TTP) variety. It is highly unlikely that it would extend to Pakistan’s “good terrorists” of the Lashkar-e-Tayyaba, Hizbul Mujahideen or Jaish-e-Mohammad, which are targeted primarily at India.

India’s long war against Pakistan-sponsored terrorism requires to be focused on Kashmir. India will also have to respond to Pakistani fidayeen attacks with further “surgical strikes” of its own. Pakistani attacks can never be allowed to go unanswered. In the process, India must seriously consider a response to the fidayeen attacks at Nagrota in language that the Pakistan Army will understand.

On an entirely different note, the eighth “Heart of Asia” Conference has just been held at the historic city of Amritsar in India, to discuss the central theme of aid to Afghanistan — a country utterly devastated by years of internecine tribal conflict covertly sponsored by Pakistan in furtherance of its own political agenda. India has been amongst the moving spirits and strongest supporters of the Heart of Asia theme, as well as one of the largest providers of financial aid and technological support to the reconstruction of war-ravaged Afghanistan.

Pakistan is also a member of the Heart of Asia grouping, which it has always tried to manipulate and exploit as yet another platform for maintaining its own exclusive dominance in Afghanistan and exclude Indian interests from that country. Pakistan’s national security adviser Sartaj Aziz is an unwelcome but utterly brazen guest who has insisted on gatecrashing into the Amritsar gathering, even though India had made it clear that after the Pakistani fidayeen attack at Nagrota his presence in Amritsar was seen as undesirable.