Some of the recent arrests were under UAPA, a law that turns on its head the principle that everybody is innocent till proven guilty. 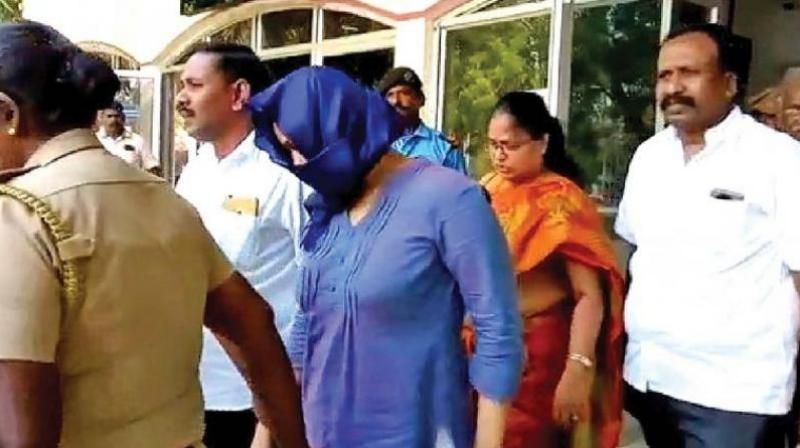 Lois Sofia was arrested after the plane landed in Tuticorin and Tamilisai filed a complaint with the airport police. (Photo: File)

Are citizens and dissenters two separate groups of people? How far will ordinary people be willing to resist when confronted with situations not to their liking? What role does fear play in the choices that ordinary citizens make?

The questions are more relevant today than ever.

A steady stream of reports about recent arrests and intimidation across the country is resurrecting fear in multiple ways among ordinary people. If the police can hold press conferences accusing well-known human rights campaigners, share documents and letters purportedly to establish links between the arrested persons and Maoist organisations, even as the Supreme Court is seized of the matter, how can ordinary people dare to speak truth to power?

It’s a different matter that the Bombay high court on Monday pulled up the Maharashtra police. “We are surprised at the press conference. How can the police do this? Isn’t the police aware that the Supreme Court is seized of this matter and the matter is sub-judice? Despite this, how can the police reveal information?” the bench had remarked.

But the damage had been done. In the social media and elsewhere, the reputations of many activists, lawyers, academics had already been muddied, aided and abetted by half-truths. One of the arrested persons, for example, a Mumbai-based human rights activist-lawyer, had been arrested earlier on charges of being a Naxal operative. He had spent years in jail. This was played up in the social media. What was not played up was the fact that he was eventually acquitted of all charges. Another activist recently arrested on charges of having Maoist links had his poems read out by a TV panellist sympathetic to the BJP. Does poetry conclusively prove guilt? Should all activist poets and writers be regarded with suspicion?

If dissent and ideological differences with those who are in power are equated with treason, what is an ordinary, politically-alert citizen to do? Many ordinary people I know have views, even strong ones, on issues affecting them or society at large. Many show shades of heroism in times of crisis. But so many have been bludgeoned into silence over the past few years.

These people aren’t cowards. But they lead ordinary lives. They aren’t full-time activists and don’t wish to put themselves at risk of going to jail or protracted legal battles. Often, they don’t have the resources, nor the connections nor, honestly speaking, the single-minded commitment to fight till the bitter end. They have to work, feed the family, look after the children, elders and so on. If they are picked up by the police on some ground or the other, most wouldn’t know a lawyer who can help, nor would they know journalists who can tell their story. When they see what is happening around them, it’s easy to understand why they are too scared to open their mouths.

Consider the case of the assistant professor in Bihar who was brutally thrashed by a group of people over sharing a Facebook post critical of Atal Behari Vajpayee after the former PM’s death last month. The matter didn’t end there. Two police complaints were filed against the assistant professor less than a week after he was assaulted. One complainant was a local resident who claimed the Facebook post hurt sentiments. The other was by a university colleague under the SC&ST Act, accusing him of harassment.

This week Sofia, a young woman research scholar, made headlines by getting arrested at Thoothukudi airport for shouting that the BJP was a “fascist” party. Tamilisai Soundararajan, Tamil Nadu BJP head and a fellow passenger on a flight from Chennai, made the complaint saying Sofia had shouted on board a Chennai-Thoothukudi flight. Sofia and her family say it was while disembarking from the plane. Still, Sofia was charged under Sections 505 (statements conducing to public mischief) and 290 (public nuisance) IPC and Section 75 of the Tamil Nadu City Police Act. A court released Sofia on bail. What I found most curious is the series of interviews by the BJP leader where she aired her views on the young woman at length, including her suspicion that some (extremist) organisations were behind Sofia’s actions, without offering any substantive proof.

It’s difficult to say how these cases will end, but there’s no doubt that cumulatively they are having a chilling effect on ordinary people who may want to speak out. The reason: India continues to have a plethora of laws on sedition, criminal defamation, hate speech, public order, etc, and these are often deployed against journalists, activists, artists, cartoonists and others to muzzle speech that is critical of those in power.

Nyaaya, an online initiative of Vidhi Centre for Legal Policy, puts the recent arrests of activists in perspective. It explains how arrests under the Unlawful Activities (Prevention) Act (UAPA) are substantively different from other criminal laws in India. It gives wider discretionary powers to the police and courts. As a general rule, bail is granted in most criminal offences. But under Section 43D(5) of UAPA, a magistrate who “is of the opinion that there are reasonable grounds to believe the charges against the person are true” can refuse bail, according to Nyaaya. And the person in charge of providing these “reasonable grounds” is the police officer investigating the case.

Some of the recent arrests were under UAPA, a law that turns on its head the principle that everybody is innocent till proven guilty. Tamil folk singer Kovan has been arrested twice — most recently for singing a song satirising the Prime Minister and the BJP, and also in October 2015 on charges of sedition, attempt to create enmity between social groups etc when he had taken on the Tamil Nadu government, then led by the late Jayalalithaa.

Such acts of suppression have a chilling effect on ordinary citizens. That it has happened before as well is quite well known. But we live in the here and now. Who dares dissent today if dissent is framed as treason by those in power?

Is this forced silence good for the country? That is a question all of us need to ask ourselves. At stake are India’s most prized attributes — democracy and pluralism.