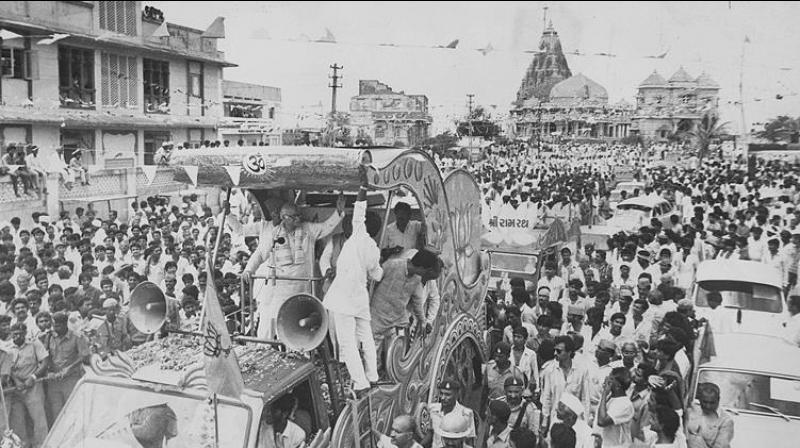 NEW DELHI: I covered BJP veteran LK Advani’s Ram Rath Yatra as it passed through Delhi way back in 1990.  I was surprised by the number of people who came out on the roads, scattering rose petals on the Yatra. Delhi seemed a long way off when I finally  made my way to Ayodhya two years later.

Armed with a letter of introduction from a Delhi unit of the BJP, I wormed my way into kar sevak ranks at the holy town in 1992. During my first three-day maiden visit to Ayodhya, I was put through intense grilling to establish my credentials as a kar sevak. After I was accepted as a “genuine” kar sevak, I saw the face that lay behind a façade of religious drama and masked by political hoopla It was terrifying to see the extent to which the Rashtriya Swayamsevak Sangh, BJP, Vishwa Hindu Parishad and Bajrang Dal combine had gone to ensure there was no infiltration.

I lived in Guru Gobind Singh camp with kar sevaks from Delhi and Haryana. I was briefed by pracharaks of the RSS and “indoctrinated” by the Bajrang Dal. I met sages and mendicants. Some of them seemed genuinely good people, and some charlatans. I also met many men who would listen to no reason, suffer no attempts to veer them away from fanaticism. There were some people  who told me that they did not expect the temple to come up at the disputed site, but all that was going on in Ayodhya was necessary to rejuvenate the nationalist spirit. Many others, including UP policemen, were certain that the temple would come up at any cost.

After my first night’s stay, one early morning (a few days before the December 6 demolition), hundreds of people  gathered near my tent. They were carrying boulders and shovels and shouting “Jai Shri Ram”.  I too joined the mob, which was led by then BJP MP B.L. Sharma ‘Prem’. Soon, the mob started breaking down three gravestones. I also carried the debris to a nearby pond, along with other kar sevaks. Within no time some makeshift shops were set up at the site to sell tea. All this happened in the presence of the saffron party leader. People called it “chhoti (small) kar seva”.

One day, I was shown a broken windscreen and shattered glass panes –a car-load of “infiltrators” had been reportedly intercepted by kar sevaks – beaten up and handed over to the UP police.

At the site of the then disputed temple, the Uttar Pradesh police and the Provincial Armed Constabulary were placed outside the structure, while the Central Reserve Police Force was inside. On the very first evening, I spotted a PAC constable shouting “Jai Shri Ram” slogans along with kar sevaks barely a few metres away from the disputed structure.

As I moved through the holy town wearing a two-day stubble and soiled clothes, I interacted with many PAC men. Always, I was treated with respect, even deference. One night some kar sevaks and I spent hours chatting with a group of PAC personnel. “We are solidly behind you. Don’t worry,” said a policeman. “If we are ordered on December 6 to attack you, we will lay down our arms and join you,” reassured another. “Come what may, we will force the paramilitary to surrender,” said a third.

The fact that I was a Kashmiri Hindu and had travelled to Ayodhya at my expense for this cause seemed to impress people no end. A sant and a boy from Jaipur bowed before me when they heard this and said, “Hindus need staunch supporters like you.” A boy from Faridabad suggested that I should join the RSS. He said a 20-day camp is held in three places every year in the country to impart arms training to Sangh activists. “This year we were taught how to handle explosives also. Even some Kashmiris were there,” he added.

Two boys from Hissar took me to their tent and taught me how to use a flick knife. A Bajrang Dal activist from Hissar held forth on how violence was necessary to ensure the Hindu way of life became accepted in India. He told me how he had received training in the use of firearms and explosives.  A sadhu  told me that even journalists staying at the Shan-e-Awadh hotel in Faizabad were being kept under close watch.

After the stone-laying ceremony of Ram temple on Wednesday, all eyes will be on  the special court in Lucknow which is to pronounce its verdict in the criminal case filed against those responsible for the demolition of  the disputed structure.

It was after a gap of about 25 years that the special court recorded my testimony as a prosecution witness in this matter. Shockingly, the CBI, which is the prosecuting agency in this case, has not filed original copies of  my newspaper reports as a documentary evidence in the matter.

My day-long testimony in the court was recorded on the basis of a statement recorded by a senior CBI officer soon after the demolition of the disputed structure. Many dates related to my Ayodhya visit had been wrongly recorded in my testimony by the CBI.

During my cross-examination, the defence lawyers fired a volley of questions to know where I had  preserved  the original copies of my news reports. Also, they were keen to find out whether I had sought written permission from my seniors for my Ayodhya assignment.