DisCourse: Man, It’s a beastly war out there

A nation-wide study has recorded 81,000 cases of such hostile forays by wildlife in one year. 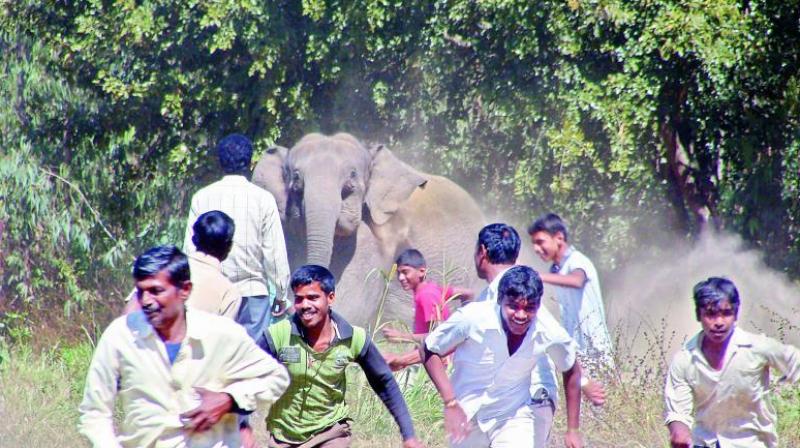 Figures show that some 14,000 of the 30,000 elephants in India live close to human habitats in West Bengal, Odisha, Jharkand, Karnataka, Chhattisgarh and Assam.

India’s arguable status as the most populous country and record of rapacious‘development’ have inevitably had costs for our forests and wildlife. Just since the 1990s, we have shorn the country of a third of its forest area and destroyed over half of all wildlife corridors that animals walked and owned for centuries.

Why are incidents of wildlife-human conflict increasing in recent years? Let me give you an example of the elephant, a species I have been keeping track of since 1980. Much of the conflict arises due to the  depredation of agricultural crops by the elephants, but the jumbos are also responsible for the death of a large number of people. In the early 1980s, I had compiled information on the number of people killed by wild elephants each year across the country. My estimate was about 150 people killed each year, the majority of cases occurring within agricultural areas or human settlements. From that figure, the number of human deaths has increased to about 500 in recent years. Southern Bengal had practically no incidents of human deaths by elephants in the early 1980s. In 2015, a population of not more than 150 elephants, which spent only part of their time in southern Bengal, was responsible for 71 human deaths, an unacceptably high figure. During this period, damage to crops had also probably correspondingly tripled or quadrupled, but country-wide data is not available.

Crop depredation by the Nilgai and Black Buck, too, has increased in the north. Leopards have increasingly predated on people, especially children, in some states. However, the legendary man-eating tiger is much less of a threat to humans now than some decades or a century ago.

So, why are wildlife species in conflict with people? Is loss of forest cover and increasing human population the main cause of such conflicts? The answer is not straightforward. It all depends on the time scale. If you look at the problem over a historical time scale, the loss and increasing fragmentation of wildlife habitats is certainly the primary driver of conflicts. But the answer is far more complex when you look at trends in recent decades.

While smaller towns and villages are facing conflict with tigers, wild boars and elephants damaging crops,  leopards are haunting residential societies in metros such as Mumbai, Bengaluru and Pune. The core issue for this rising man-animal conflict is changing forest cover and growing human presence, bringing animals and people dangerously close.

A nation-wide study has recorded 81,000 cases of such hostile forays by wildlife in one year. It is not just crops getting destroyed or people getting killed, but animals, too, are at the receiving end in this conflict. Government data shows that for every four people killed, an endangered animal is also lost.

It's basically a fight for survival. Figures show that some 14,000 of the 30,000 elephants in India live close to human habitats in West Bengal, Odisha, Jharkand, Karnataka, Chhattisgarh and Assam. These states reported the maximum crop damage and deaths in the country due to elephants between 2013 and 2016.

Official data on human conflict with leopards are not available, though large carnivore experts are of the opinion that over 20,000 leopards, animals that adapt quickly to human-dominated landscapes, may be present in India.

A suite of factors drives elephants to raid agricultural crops and, in the process, come into severe conflict with man, resulting in both human and elephant deaths. We can categorise the factors in many ways but one simple  framework would be to place them under factors that “push” elephants away from forests into the human domain and those that “pull” elephants from forests into the human production landscape. The push factor is clearly evident when elephants lose their natural habitat as happened in north-western Assam during the Bodo agitation of the 1990s. Hundreds of square kilometres of forest were cleared, settled and cultivated within a short time span, rendering hundreds of elephants homeless. The result: a sharp escalation in man-beast conflicts, with elephants wandering into habitations and agricultural fields as far south as Tezpur, along the Brahmaputra. 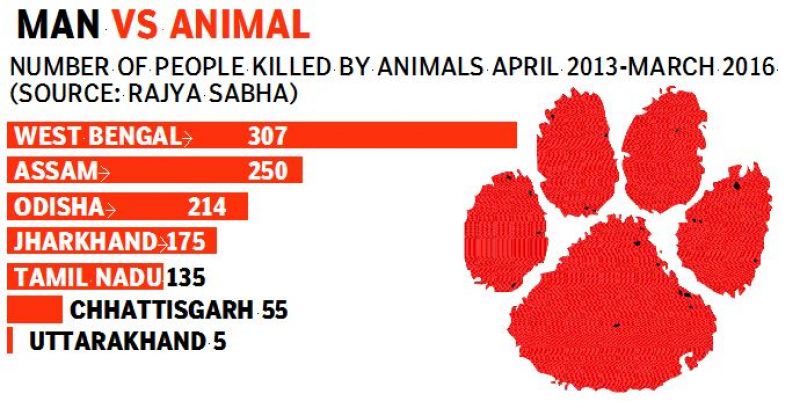 The role of fragmentation is another factor in promoting conflicts and is evident in the east-central region in states such as Jharkhand and Odisha, where mining and other forms of development have made deep inroads into natural forests. Then there is habitat degradation, a process of depletion of natural forage resources for elephants. In recent times, the rapid spread of the invasive plant, Lantana camara, in southern India could have also reduced palatable forage for elephants and forced some of them to seek resources outside forest areas.

But the issue is not that simple. Many forests provide sufficient resources for elephants, yet they raid cultivated fields. What “pulls” elephants into crop fields is the abundant availability of forage, be it paddy, millets, or sugarcane. Elephants also develop a taste for jackfruit or selective parts of coconut trees. An elephant could meet its daily food requirement by foraging for only 6-7 hours in a ragi field, vis-a-vis 12-14 hours it would  spend for it in the forest. With irrigation facilities and changing cultivation patterns, elephants now have abundant water in village tanks and small dams outside forests. Farmers also cultivate more than one crop in a year.

Two other factors often overlooked include, adverse climatic events, such as a severe drought, and an increase in elephant population. In 1982, when southern India experienced one of the worst droughts of the last century, an entire clan of elephants left the forests of Hosur (Tamil Nadu) and Bannerghatta (Karnataka) and marched into the Chittoor forests of Andhra, where wild elephants were unknown for the past several centuries. Something similar happened in erstwhile Bihar (now Jharkhand), when a clan of about 50 elephants made a deep foray into southern Bengal in 1987. In both cases, the drought may have been the proverbial last straw, as human pressures on forests in the south and mining or clearing of forests in Jharkhand made them unsustainable for elephants in a difficult year.

India’s Jumbo problem
The biggest challenge in containing elephants within their natural habitat and minimising conflicts is their incredible capacity to overcome anything that we device to keep them away from our settlements and agricultural fields. They use ingenuous methods to break electric fences, fill up the so-called “elephant-proof” trenches and negotiate them in an acrobatic fashion, sneak silently at night through villages and towns to reach a house that has stored grain or country-made liquor (yes, elephants can also get tipsy). In short, they totally outsmart humans.

In the vast agricultural landscape around Bengaluru, male elephants form groups under the leadership of a large bull to tackle hostile farmers. Compen-sation to farmers is certainly needed as an interim measure to garner support for conservation and dissuading them from killing the elephants through electrocution or other means. We should move towards an insurance regime for providing relief to farmers who suffer crop damage.

In the long-term, we should plan for elephant conservation with larger landscapes that can sustain viable populations. Project Elephant had already identified several such landscapes (or Elephant Reserves) across the country in the early 1990s. We must now refocus our attention on how best to strengthen conservation and management efforts in these regions.

Dr Raman Sukumar, the first Indian winner of the International Cosmos Prize, is best known for his work on human-wildlife conflict, and is founder of the Asian Nature Conservation Foundation