The Queen, in fact, almost looked as glamorous as Kate in a shimmering purple gown — but of course all the cameras were focused on what Kate wore. 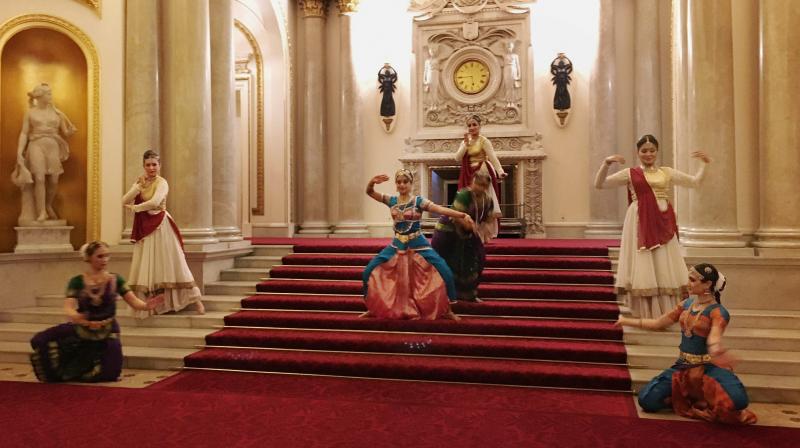 A special dance performance choreographed by Arunima Kumar for Akademi on the steps of Buckingham Palace in London to mark the launch of UK India Year of Culture in London. (Photo: AP)

For anything to be launched in London, it first has to rain. And that’s how we were caught in a drizzle, with a chill wind blowing on the day the Queen invited around 250 of us for a reception to mark the start of the India-UK Year of Culture. There were a number of Indians who had flown in specially for the occasion from all over the world — including actors like Kamal Haasan, and designers such as Manish Malhotra. To everyone’s relief, it was not turned in to a Bollywood affair — and if there were any stars lurking about, no one missed them.

We were told that Amitabh Bachchan had been invited but could not make it, but all in all it was still a glittering evening, given a dignified and sober touch since India was represented by finance minister Arun Jaitley. There were no songs and dances and the ubiquitous “Jai ho!” was missing. (Phew!) But there was good conversation and plenty of “networking”.

Anyway, so last week we briefly colonised Buckingham Palace, shook hands with the royals, and quaffed some delicious canapés — created by chefs from Veeraswamy — one of the oldest restaurants on Piccadilly. Its owners, Namita and Ranjit Mathrani, had carefully worked out a please-all Indian cuisine.

Prince Philip and the glamorous grandchildren — Prince William and Kate Middleton, the Duke and Duchess of Cambridge — were also happily mingling with the crowds. Interestingly, Prince Philip is certainly not as forgetful as one might think — and even discussed with Ratan Tata (who was also there) about a visit long ago to Jamshedpur. Amazing!

The Queen, in fact, almost looked as glamorous as Kate in a shimmering purple gown — but of course all the cameras were focused on what Kate wore. The next day the papers ignored all of us — and only printed pictures of Kate in her sparkling, white dress and shoes. However, not missing a moment, I did tell her about the Partition Museum, and invited her to Amritsar!

The Palace had displayed material related to India, and included books on calligraphy, photographs et cetera — obviously care was taken to pull out only that which would not immediately attract a demand for restitution. And so — the Kohinoor was certainly not there!

On the previous day — we also attended an evening at the Lalit hotel, owned by Jyotsana Suri. The Lalit, near Tower Bridge, named after her late husband is a marvellous space — a real tribute to Indian art and craft — including some beautiful blue chandeliers, and sculptures — all sourced from India. In the discussion that followed — the most important point was made by Manoj Ladwa, who runs a think tank called India Inc. He felt strongly that these “cultural” exchanges should not leave out small towns and villages in India. And we seconded that!

And now to commemorate the 70th year of the Partition of India, we have the support of an old friend and acclaimed filmmaker, Gurinder Chadha. Apart from making a rare film on the Partition (Viceroy’s House), she has a deep personal link with Partition. Her own mother had been lost, as a child during the great migration, and later reunited with her family. Who could be a better champion for the Partition Museum? We have invited her for a discussion at the House of Lords this week, and are planning events with her in India to talk about some very interesting information she has revealed in the film. So book your tickets now in the UK, and later in August watch this space, when it is released in India!

Ms Chadha says: “I am delighted to be joining the new Partition Museum in Amritsar for the launch of Viceroy’s House in India in August. As the film opens across the UK this weekend I am happy that we will be able to discover the real history of why Partition happened rather than the version of history we have been told to date. Like the film, the Partition Museum has been a long time coming, and I hope will be a befitting tribute to all who suffered in 1947 and are haunted still today by the tragedy of Partition.”

Brexit still remains the flavour of the month — and new, often startling bits of information are constantly discussed. While a House of Lords committee (in which Meghnad is a member) has mentioned that perhaps there can be “cost-less exit”, Remainers are gearing up for another round of the battle. In fact more and more money is being poured into the “stop Brexit” campaign — and so it will not be, apparently, a very easy ride. Gina Miller (also with an Indian connection), who had forced Theresa May into consulting Parliament before pulling the plug, is now back in the fray. She is threatening to throw in the gauntlet one more time, if Parliament does not give, what she calls a “meaningful vote”.

This battle could go on and on, because Ms Miller insists that she has had a successful career — and she cannot think of anything better to do with her money than fight the good fight!

Good to see so many women take up difficult causes!