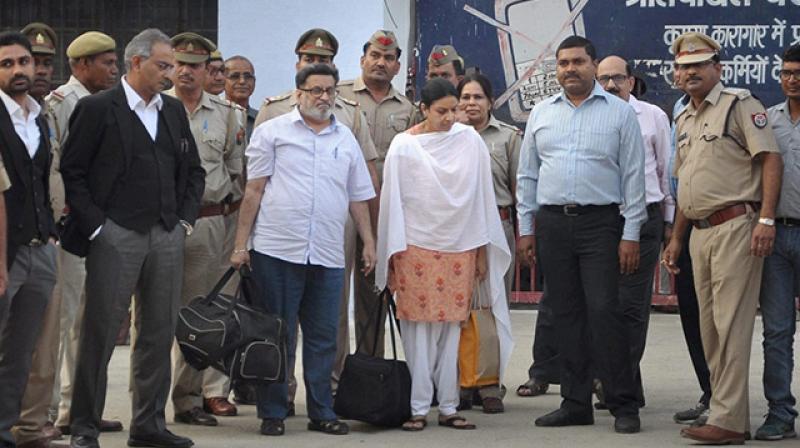 The couple were acquitted by the Allahabad High Court on October 12 after they were convicted in 2013 by a lower court for the murder of their daughter Aarushi and domestic help Hemraj. (Photo: PTI/File)

A fair criminal trial must meet three criteria — an independent judge, a fair prosecutor and thorough and honest investigation by the police.

On October 12, the Allahabad high court acquitted Rajesh and Nupur Talwar on the charge of murder of their only child, Aarushi, and their domestic worker, Hemraj Banjade. They had suffered imprisonment for four years. The entire case rested on circumstantial evidence. The investigation was conducted by the CBI. Their senior defence counsel, Tanveer Ahmed Mir, said: “The investigating officer manipulated the case and fabricated statements of my clients in such a way that the court would summon them.”

The high court censured the trial court judge, Shyam Lal, for convicting the Talwars. “Like a film director, the trial judge has tried to thrust coherence amongst facts inalienably scattered here and there, but not giving any coherence to the idea as to what in fact happened.”

The British historian Patrick French, who wrote an admirable book on Partition, carefully followed this case and was always convinced of the couple’s innocence. French holds that the CBI did realise that “there was actual physical evidence tying another suspect to the scene of the night: Krishna”. The said Krishna was formerly a compounder in the clinic of the dentist couple.

“Rather than step back and admit a mistake, the CBI concocted an implausible ‘typographical error’ to explain why a pillowcase found in Krishna’s room in a neighbouring building was stained with Hemraj’s blood. This discovery strongly suggested that Krishna had been present in the Talwar home at the time of the murders.”

He concludes: “The last I heard, Krishna was unemployed and had moved from Noida to Delhi to live with relatives. Although he was born in Nepal, he has lived most of his life in and around Delhi. If the case of the murder of Aarushi and Hemraj is reopened, he and the other men who were present in the Talwars’ house that night must be ready to answer questions.”

What the case establishes is a lesson of wider impact. It is not a media trial but a careful, scholarly account that can establish the truth and expose the flaws in the investigation and the trial.

On October 9, the Gujarat high court commuted the death sentences to life imprisonments of 11 accused in the death of Hindu activists in the Godhra train arson attack on February 27, 2002 — which became an excuse to stage the Gujarat pogrom. A correspondent who carefully followed the case for years pinpointed the flaws in the judgement; in particular, acceptance of the “conspiracy theory” against Muslims.

The trial of Z.A. Bhutto for conspiracy to murder a political opponent was a travesty of justice. The judge who presided over the trial, Maulvi Mushtaq Hussain, was a sworn enemy of Bhutto. Then chief justice Muhammad Yaqub Ali was removed and chief justice Sheikh Anwarul Haq was appointed in his place. He fully lived up to Gen. Zia’s expectations. The Supreme Court of Pakistan upheld the conviction by 4-3. Execution on a divided verdict is reprehensible.

The International Commission of Jurists was represented at the appeal before the Supreme Court by John Melville Williams QC, an experienced criminal lawyer of the English bar. He was able to examine the record of the trial and study the judgement, the grounds of appeal and other relevant documents. He referred to the “apparent failure of the Lahore high court to examine critically the evidence of accomplices. Indeed, instead of so doing they seem to have permitted, if not encouraged, them to change their evidence to make it more favourable to the prosecution.”

In his view, “The suspicion that the judges accepted the evidence because of their antagonism to Bhutto rather than on a true assessment of the reliability of the witnesses is not one that can be removed by the appeal court so that a rehearing is the only appropriate solution.”

Mr Williams opined: “It is clear from the variety of statements made by many of the persons involved that all witnesses were subject, or believed they were subject, to great political and personal pressures so that evidence is also suspect on that ground.” Sadly none of the books on the trial do any justice to the subject.