Will more Indian kids be able to pay off rishirin? 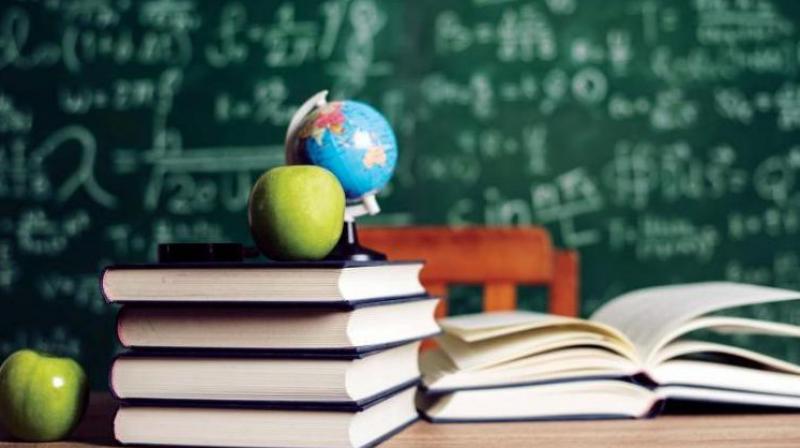 A Higher Education Funding Agency has been set up by the government to help institutions develop world-class infrastructure. (Representational Images)

What is the building block of learning? It is a quality that is praised in one of the first lines written by mankind in the Rigveda and also one that is enshrined as the Indian citizen’s first fundamental right.

Herself a seer, Rishi Ambhrin’s daughter, Vak, or free speech, lets Brihaspati articulate and put names to his ideas, thus setting into motion the crystallisation of thought and the process of learning, sparking curiosities, triggering memory formation and leading to the unravelling of the mysteries of this world.

As India celebrates its 56th Teachers Day and remembers India’s second President, who was also a philosopher in his own right, it is worth reflecting how, alongside the discipline and rigour of the gurukul, the tradition of critical thought and analysis has been very much a part of our history of education, which was never as staid and unexciting as is often made out by uninformed detractors. As the narrative of Nachiketa and Yama demonstrates, intellectual courage has always been nurtured and rewarded by our teachers.What should be the objectives of higher learning in universities? Such an education should enable "empowerment and enlightenment". Seekers of such learning should be empowered with necessary information, knowledge and abilities to support themselves besides discharging their duties towards the larger society. In addition, such learning should also broaden their perspectives to understand the nuances of life, to chose the right way of living in harmony with himself and external forces and be enlightened with necessary spiritual quotient surpassing material quests.

Our country has the legacy of great scientists and scholars who had contributed immensely to the progress and welfare of mankind through their findings in ancient times. These include Aryabhata, Varahamihira, Charaka, Susruta, Vagbhati, etc, who had enriched different disciplines.For several reasons, our country has fallen behind over the centuries in scientific research. Today, our scientific publications are less than two per cent of global publications.

At the same time, several Indian minds are now in the forefront of managing technological and other business enterprises across the globe. With Isro launching Mangalyaan and India planning to send its own astronauts to space by no later than 2022, as well as many Indians occupying important positions in many international organisations, all certainly seems to be well.

This goes to prove that Indian minds are at par the best in the world and even better in some aspects. The larger issue, however, is one of the brain drain from India. Why can’t such sharp minds be used in our own country? It is time to make "brain gain" for the larger good of our country.For that to happen, we need to create a congenial atmosphere for science and industry to flourish on our own soil. This is what Prime Minister Narendra Modi is keen about. He is leading a spirited effort for a paradigm change in our priorities and policies so that a resurgent India can be built unleashing the full potential of all Indians.

A heartening development has been the increase in access to education under the incumbent government. During the UPA government’s tenure, the number of universities in the country was 723. This has increased to 799 during the NDA’s tenure, with 76 new universities having been established. The total number of colleges in the country has risen from 36,634 to 39,071, with 2,437 new colleges being opened. The number of schools has risen from 15,18,160 to 15,22,346.

Prime Minister Narendra Modi once said: "Quality education should be prioritised along with literacy campaigns. We have been focusing on the outlay, now it is time for us to concentrate on outcome of our education system". In order to realise this and also fulfil its promise of providing more autonomy to higher education institutes, the government has approved a new law to give IIMs unprecedented levels of academic and administrative freedom. A new regulation passed by the University Grants Commission (UGC) has, meanwhile, granted different grades of autonomy to all institutions of higher learning based on their performance. With its Higher Education Commission of India Bill, the government is also seeking to put an end to corruption in funds disbursement and arrest the commercialisation of education.

Meanwhile, a Higher Education Funding Agency has been set up by the government to help institutions develop world-class infrastructure. After selecting them carefully, it is assisting 20 institutions, 10 public and 10 private, to crack the international top-100 rankings with a budget of Rs 1,000 crores per institution. It is an initiative involving leading educationists and experts.The big achievement for the nation, though, has come about in the area of literacy. Only 18 per cent of our population could read and write in 1947. Today, nearly 74 per cent of our population has basic literacy skills.

Over 95 per cent of the country’s children are in school and nearly 86 per cent of young people are functionally literate. This is no mean feat. And the Saakshar Bharat Programme and the Sarva Shiksha Abhiyan have been the government’s key policy instruments in effecting change. By marrying the Beti Bachao, Beti Padhao programme with the latter, it has been able to achieve good results. Women have also taken advantage of the government’s adult literacy programme and its All India Council for Technical Education scholarship scheme, under which one female student who has qualified for pursuing technical education is selected from every family the total annual income of which is less than Rs 6 lakhs and given a sum of Rs 30,000 or her tuition fees, whichever is less, plus Rs 2,000 per month for 10 nmonths as a contingency allowance.

To maintain the standard of education and to ensure actual learning, the government has brought back compulsory board examinations for Class 10 in CBSE (Central Board of Secondary Education) schools. It is a most welcome move. Construction of toilets in all government schools is another, smaller, improvement.Sport is an important part of a student’s curriculum for freeing the spirit and bringing about a holistic development of the body and mind. Keeping this rationale in view, Parliament has very recently passed the National Sports University Bill to establish a sports university in Manipur, which will help our young athletes establish their advantage over their counterparts in the rest of the world. Starting this year, the government has also been organising the Khelo India School Games to boost grassroots-level sports infrastructure among under-17 schoolkids.

The government now stands on the cusp of accomplishing an unlikely feat - reversing the brain drain. Launched on April 18, 2018, by the human resources development ministry, the Study in India campaign aims to attract international students to pursue higher education from Indian colleges and universities. Partnering with over 160 institutes, the initiative will span courses up to the doctoral level and will offer 15,000 seats to foreigners. And to retain talent, especially in science and technology, there are fellowship schemes like the Ramalingaswamy Re-entry Fellowship, Ramanujan Fellowships and Innovation in Science Pursuit for Inspired Research. All of these can be fruitfully explored by Indian scholars. Indeed, even those who seek to study humanities instead of the sciences need no longer despair. Known as liberal arts in the West, this field is fast shaking off its reputation of being a poor choice for careers. More and more bright and inquisitive minds are opting for it to pursue their intellectual quests and new universities are fast establishing a track record in catering to their demands and giving them the much-sought-after Ivy League experience with the help of top-quality faculty, drawn from the world over. So no need to hanker after the sociology masters from Cornell. This is indeed the best news.

According to Manusmriti, a man has three kinds of rin, karz, dues to pay to this world. These are pitrrin, devrin and rishirin. Pitrrin is where you give birth and raise your children as your parents did unto you and hence pay your dues to your ancestors. Devrin is where you connect yourself with the production system and put in your efforts to raise the GDP. Rishirin is where you contribute to the repository of wisdom that the teachers, the sages, have built through the ages, thus fulfilling your duty towards the march of human civilisation. Will more Indian children be able to pay off their rishirin? Such an outcome does not seem impossible.