Those of us who think of ourselves as Hindus, must consider what the true meaning of being Hindu is in light of such instruction from our texts. 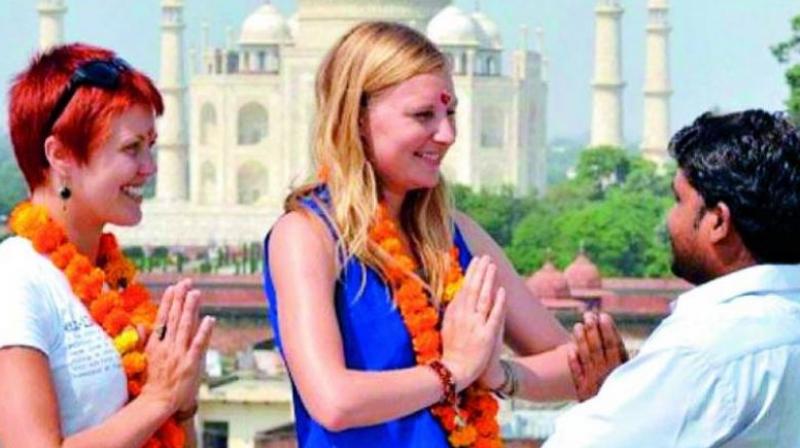 In no other country I have seen the tradition of offering a guest or a stranger who has come uninvited to your house, a glass of water.

Over the decades I have travelled to many countries, perhaps 30 or 40 or so. In no other country I have seen the tradition of offering a guest or a stranger who has come uninvited to your house, a glass of water. My mother did not specifically teach me to do it, but because she did it every time someone came home, I developed the habit.

In these days, most of us have more strangers knock on our doors than in the time of four decades ago. Courier delivery people and cable television repairers and such other people drop in almost every day. They do not expect to be treated as guests at each house to go to, but because it is my habit I still ask them if they want to sit down have a glass of water.

When some years ago I read the Valmiki Ramayana (the version I read is an excellent translation by my friend Arshia Sattar and published by Penguin), I was surprised to see that this same tradition existed in the time of Shri Ram. Every time he would go to a new place, whether some rishi’s hut in the jungle or some poor person’s place in a village, he would be offered a glass of water as part of a ceremony. This is our Indian tradition and we should be proud of it, especially because, as I have said, I do not think anyone else around the world seems to have it.

We are all familiar with the line Atithi Devo Bhava, which comes from one of the Upanishads. The exact line is “Matru Devo Bhava, Pitru Devo Bhava, Acharya Devo Bhava, Atithi Devo Bhava” and we were taught this sentence in our school in Surat. It means that the mother, father, teacher and guest must be respected like God. Those of us who think of ourselves as Hindus, must consider what the true meaning of being Hindu is in light of such instruction from our texts.

Have we seen any such respect or even sympathy, in this business of the disenfranchisement that is going on of people in Assam? The allegation is that many of the 40 lakh people who have not been able to identify themselves as being Indian citizens from 1971 are actually Bangladeshis.

There has been some sympathy for those, like former President of India Fakhruddin Ali Ahmed’s relatives, who have not been able to do this. But the assumption has been that these are genuine and deserving Indians who are being left out.

My concern is for all of them. Even if someone is the child or grandchild of a Bangladeshi or even a Bangladeshi migrant themselves, then so what? My culture, my religion and my upbringing tells me that I must treat them, and especially those of them who are poor and weak, with humanity. I do not think that we are showing this Hindu humanity and humaneness in the process of the National Register of Citizens, which to me seems inherently cruel.

What do we imagine that those who are born in Bangladesh or those whose parents were born there are doing in our country? The knee-jerk reaction will be casual allegations like they are doing terrorism and they are infiltrating our society and taking advantage of the things that we have.

Such a similar allegation is also happening under American President Donald Trump. He has said he does not want immigrants from “shit-hole countries” but only from places like Norway. Meaning he does not want people from Africa and India (even though many Indian immigrants apply for the highly valued H1B visa which adds to the America economy) but from white countries. The main anger is directed towards the Mexicans who are thought to come because they want to “mooch”. This is an American expression, which means someone who lives off the benefits of the state, such as free housing and cheap public transport, and unemployment benefits but is generally lazy. I know America well, and in my experience the Mexican immigrant is, along with the illegal Gujarati Patel immigrant, among the hardest working people in that country. We know of Patel motels but we should also know that most of these people migrated without proper visas and began their careers cleaning motel rooms, which requires hard physical labour.

Something similar is happening with Bangladeshis, or those people who may be Indian but are thought to be Bangladeshis. If one looks around at the service staff at restaurants and watchmen and other such people across all parts of India, many of them are from Bengal, whether east or west.

In Italy, there are many illegal Bangladeshi immigrants across the country, but they are without question enterprising and hardworking and have come there because they think it is a good and decent place to live in. Why should we spit on such people who come to us because they actually like our nation more than theirs?

I need hardly tell the reader what you already know, that unlike America and Europe we do not have free or subsidised public housing, we do not get unemployment benefits and we do not have good public healthcare. India is a hard place to live in for someone who is poor. We should keep this in mind when we debate what the next stage is in this journey towards declaring these people foreigners and figuring out what to do with them. And we should, especially those of us in positions of power who take pride in our culture, tradition and religion, ask ourselves how we are to interpret Atithi Devo Bhava for such individuals.