The message going out is simple — use your physical attributes to charm, disarm, seduce and woo the voter. 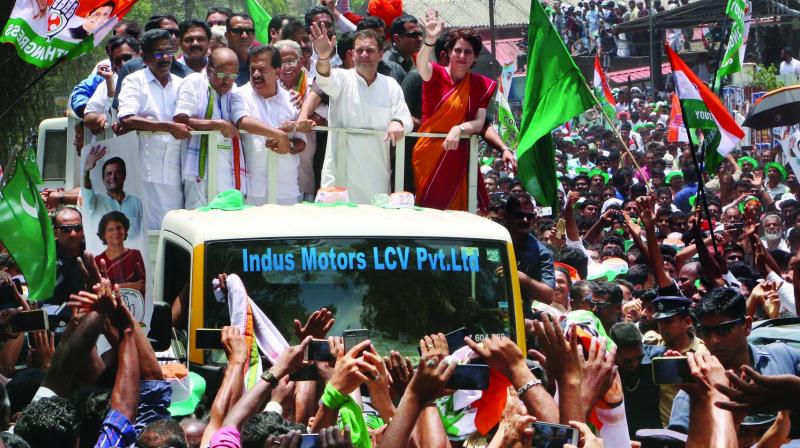 Congress president Rahul Gandhi, with party general secretary Priyanka Gandhi Vadra and other leaders, waves at party supporters during a roadshow after filing his nomination papers for the Wayanad seat on Thursday.

Despite all the noises. Despite the hashtag (#halfthevote), where, pray, are India’s women in this key election? Nowhere! That’s the bald truth. In terms of representation, the number of women who have been given tickets to fight fairly and without prejudice, is miniscule. Those who have made the cut, are either “lookers” from showbiz or daughters, wives, daughters-in-law of powerful men. Most women are there for the wrong reasons. Proxy candidates. Those who are in the fray on the basis of their looks, star power, crowd-pulling abilities, may not have realised how blatantly sexist this approach is in reality. It is more anti-women than it appears. The message going out is simple — use your physical attributes to charm, disarm, seduce and woo the voter. Do whatever it takes! Amazingly enough, it’s a woman chief minister who has used this strategy most brazenly. Mamata Banerjee set the ball rolling by roping in the best female “talent” from Kollywood (as the film industry in Kolkata is called). I watched clips of some of these lovely ladies campaigning, and said “Wow”! They were pressing all the right buttons and the crowds were lapping it up. One of them candidly stated, “Normally, all of you would have to pay money to see me… buy tickets to watch my movies. But here I am in front of you — for free!” Ummmm. Okie. If that’s how you put it. A free show is all it takes to get that crucial vote. Disappointingly, it’s a woman leader who has pushed this trend. And female candidates who are happily going along with this “jatra”.

So it is in Maharashtra and other states. Not that good looks should be held against a woman who wants to enter politics — but to peddle a woman’s physicality with no reference to her abilities is, to my mind, most demeaning. And certainly does not serve the cause of women in the long run. Elections 2019 will be defined by the participation of 15 million first-time voters. It is a significant number. But women and the youth are not a part of the narrative at all! That is just so shortsighted. It is precisely this demographic that needed to be aggressively courted and co-opted — but wasn’t. Nothing of consequence has been tabled for women or youngsters. Representation across party lines for both these demographics remains pathetic. When I think of women and our young in terms of valuable resources — what a waste! How underutilised is their combined potential! Why would either bother to engage enthusiastically in the elections when they are barely on the fringes of any political dialogue?

The BJP is a testosterone-driven party. That’s a given. It may have elevated one or two or three women to positions of prominence, but the people holding the strings are party satraps of the old school variety. With chief ministers like Yogi Adityanath in power, women are automatically relegated to staying in purdah — at least, metaphorically! On the other hand, there’s Mayawati — whose testosterone levels can compete with any man’s. She too isn’t talking about women’s issues, busy as she is, being tougher than any man. All this is a pretty disheartening commentary on the current state of affairs. For all her magnetism, Priyanka Gandhi Vadra, who arrived a bit too late on the scene to make a dent, still plays an attractive appendage to brother Rahul Gandhi, showing up at his rallies in the role of a cheerleader. Where is her own constituency? We may never figure out why Mr Gandhi chose Wayanad in Kerala (he is free to fight from two constituencies, of course), but the messaging of that move doesn’t seem right.
Losing in Amethi — that too, to a woman, will as good as seal his fate in politics and serve as a “ta ta bye bye” moment in his political career. Surrounded by a coterie of smug and privileged “advisers”, Mr Gandhi is being misled by this bunch of arrogant and filthy rich fellows. Such a shame, really! Mr Gandhi could have been that vital bridge connecting women voters and the youth to a better, more progressive India. Instead, he seems to be faffing around, attacking and taunting Prime Minister Narendra Modi, who in turn, is also over-focusing on Mr Gandhi’s Twitter account rather than on issues that matter. The PM has neglected women consistently — so that’s no surprise. But for him to take our young for granted is going to cost! Where are the promised jobs — one crore, right? Show us even 10 lakh jobs enabled by you during your tenure, sir.

There it is, my friends. A pretty dreary and lustreless scenario for the weeks ahead. It’s not about which candidate to vote for, it’s about which one not to. I fear, given the uninspiring names in the kitty, far too many voters will stay away from polling booths, weary and disillusioned, cynical and upset. Women, for sure, are feeling left out and asking themselves why they should bother to cast their precious vote. Ditto for the first-time voter. Here’s a little story from Bihar: the Class 12 results have been pretty spectacular, with the highest percentage of successful students clearing the boards at first shot. How come? As a family chauffeur whose own son had sailed through, surprising his father, said wryly, “Yeh vote bank results hai — these students are 18 years old, and they will be voting for the first time… examiners were instructed to pass everybody!” He added that the successful boys and girls are unable to answer a single question on the exam paper if asked to do so… but they weren’t! This is called “education by numbers”. Fill those classrooms anyhow, and forget about teaching them. Our “graduates” are semi-literate, but proud of their degrees! Who can blame them? We have been turned into a nation of “unpadhs”. But that’s fine. We can destroy satellites in space. Pity we can’t eat those satellites and fill hungry stomachs.