Don’t rain on the monsoon parade

About 57 per cent of the farmland in India is rain-fed, and failure of monsoon thus affects a large section of the farming community. 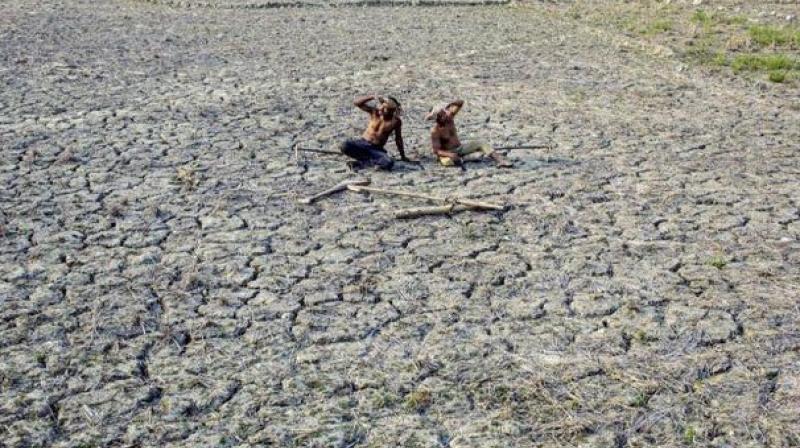 Since drought affects the farming community the most, our first priority has to be improving crop productivity and sustain farming even under drought conditions. (Photo: PTI)

As India stares at another harsh summer with the prospect of drought across the country, the issue before us is simple -  how to manage our water resources and end our over-reliance on the monsoon. Year after year, the blame game is the same - hold the 'below normal' monsoon rains responsible for our water woes in summer without acknowledging that the 'below normal rainfall' that creates water stress is the new normal across the country. More so, because our water demands are growing, and to some extent, is linked to the rapid growth in economy.

It's time to start looking for alternative ways of managing an all too possible drought. Topping the list has to be a more responsible management of water resources during non-summer periods. Water must be respected as a precious resource, not a commodity that can be taken for granted, so that we have adequate water for the summer. The old phrase, 'save it for the rainy day' must be reframed in the Indian context, to 'save it for the dry day'.

An aggressive technological intervention plan to manage water efficiently at all levels, from large river basin scales, down to small household scales must be readied, alongside local traditional measures such as rainwater harvesting, groundwater recharge, and reviving water bodies, all of which bring obvious long term relief.

Farming
Since drought affects the farming community the most, our first priority has to be improving crop productivity and sustain farming even under drought conditions.

About 57% of the farmland in India is rain-fed, and failure of monsoon thus affects a large section of the farming community. As a first step towards countering drought, cultivation of drought tolerant varieties of crops developed by the Indian Council for Agricultural Research (ICAR) and the State Agricultural Universities must be facilitated on a large scale in the rainfed regions. These varieties are available for a range of crops from rice through wheat, sorghum, maize and even cotton in different climatic conditions.

Knowledge on drought resistance, generated through years of research in agricultural universities and research centres and a big policy push and governmental support in implementing the research will take us a long way in protecting small farmers, the most vulnerable to drought. To supplement water supply in the rain-fed agriculture areas during drought, often, the immediate   measure adopted  is to dig more and more -  and deeper and deeper - borewells. As both intensity and aerial extent of droughts seem to be increasing in the country, such measures lead to unsustainable depletion of groundwater. Large scale systems studies are now possible to examine integrated groundwater-rainfall interactions, which will be useful to identify critical locations in rainfed regions for additional support through groundwater, without affecting the resource adversely.

Technology intervention at all levels - from small farms to villages and towns, from cities to watersheds and river basins -  is essential to reduce our heavy dependence on the monsoons. In areas which are irrigated either by a surface water source or through borewells, the water use efficiencies are very low.

The Internet of Things (IoT) laboratory at the Interdisciplinary Centre for Water Research, IISc Bangalore, is currently developing and deploying such sensors, while simultaneously trying to make sensors affordable to farming communities. Similarly, a big push towards technology intervention is necessary in the large scale water systems consisting of reservoirs, canal networks and water distribution infrastructure.

While the structural infrastructure is in place for an appreciable time now - and it has definitely helped in ensuring food security of the country to a large extent - the efficiencies of water use have remained quite low, around 40% and lower in many cases.  Even a 15 - 20% increase in water use efficiency in canal irrigation will result in a significant water saving. Such increase in irrigation efficiency should be possible with the currently available technologies. Although initial capital investment may be large, technological interventions in irrigation sectors where the structural infrastructure already exists, will in the long run serve well to neutralise the drought impacts.

It is also instructive to understand that the canal command areas are often waterlogged due to rising groundwater levels, and ensuring that water-logging is prevented ensures groundwater remains at sustainable levels. Acquifer continuity ensures the benefits of a good groundwater management in one region affects other regions. Additionally, a large number of village ponds and lakes that are in an unhealthy state due to discharge of human and animal waste should be restored.

Water Leakage
A less addressed, but equally challenging and increasingly visible water stress condition is that occurring in urban areas. Most major cities and towns in the country face water shortage every summer. The Urban Drought!

With rapidly increasing density of population in cities, accessible water resources are fast depleting. Import of water from large distances, over dependence on groundwater for domestic needs and rapidly vanishing water bodies have weakened the resilience of urban water systems.

Significant water leakage in the distribution system that goes undetected makes  proper water auditing difficult, apart from lowering the  efficiency of the system. Technologies are now specifically being developed to detect such leakages. Given the severe water shortages every year,  it has become almost unavoidable now for cities  to explore options of augmenting the supply through waste water recycling.

The currently available  recycling technologies are however either very expensive or occupy large spaces, making them unfeasible. Its important to  develop low cost technologies for decentralised treatment of grey water  - that is non-toilet waste water, essentially from kitchen and bathrooms, accounting for about 40% of the domestic water supply - at community level with 50 to 100 households, to such a quality that the treated water can be used to recharge ponds and water-bodies, and for secondary use such as toilet flushing, irrigation and washing.

On a slightly larger scale - such as large industrial complexes, campuses - recycling systems with separate distribution systems could be effective. IISc Bangalore has set up waste water recycling plants to generate about 1 million litres of usable water everyday, using the submerged membrane technology. IIT Madras has set up a similar recycling plant on its campus. Several industrial business campuses too have adopted recycling of waste water, and   should be emulated in other campuses.

Climate Change
Clearly, the water crisis is accentuated by climate change, and we must prepare ourselves to face abnormal conditions more frequently than we are used to. Current emphasis on the creation of large scale water infrastructure in the country must be augmented with resilient, adaptive responses, out-of-the-box solutions, that synthesise the Gandhian and the Schumaker 'small is beautiful' perspective with that of large scale technological interventions.

The revival of village tanks, rejuvenating lakes and water bodies in urban areas,  adopting small-scale, local rainwater harvesting and recycling of waste water should be integrated into the large scale technological and management solutions of improving water use efficiency - particularly in irrigated agriculture - enhancing reservoir storage and allied physical infrastructure, harnessing flood waters as a resource, desalination of sea water and changing the cropping patterns,  to build resilience into water management systems.

In conclusion, our reliance on monsoon rainfall, year after year needs to be reduced by better water management using technologies and knowledge available in research institutes. A huge opportunity exists in developing new, low cost technologies that can meet specific needs of  water management, both for the individual as much as our river basins.