Nadda does not want to be ‘Rahul’

The battle for Delhi is heating up with the Central Election Commission contemplating an announcement of the poll dates. 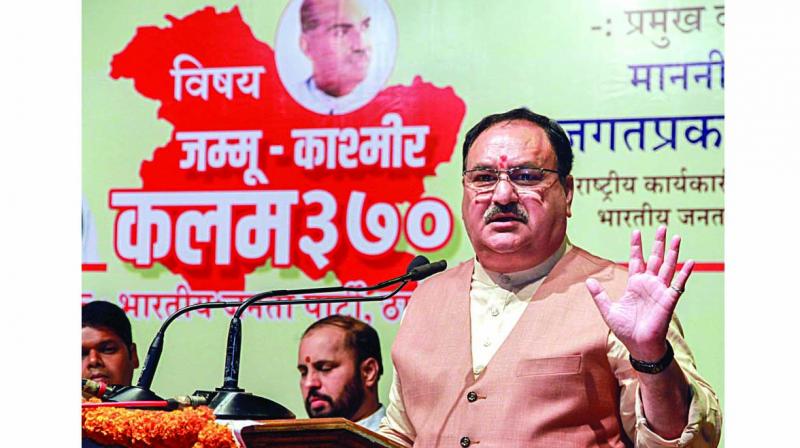 Longing for the sun
J.P. Nadda was set to take over as the full-time Bharatiya Janata Party president in January but there is no sign of a process in motion to elect the working president as Amit Shah’s successor. Mr Nadda is reportedly a tad jittery as the Delhi Assembly poll is drawing closer and he, after the Jharkhand Assembly electoral setback, does not want to be labelled the “Rahul” of the BJP. Informed sources say nothing is likely to happen before January 15 (Makar Sankranti) when the sun begins its movement away from the Tropic of Capricorn, towards the northern hemisphere. It is also known as Uttarayan and supposedly starts an auspicious period. A reshuffle in the Congress and a Cabinet expansion in Jharkhand is also reportedly on hold till the sun changes its position.

Pretenders to Delhi’s throne
The battle for Delhi is heating up with the Central Election Commission contemplating an announcement of the poll dates. There is a sense of belligerence in the BJP following the anti-CAA-NRC protests in the national capital, based on an assessment that politics in the national capital stands deeply polarised. Several new and notable wannabes for the Delhi chief minister’s post have cropped up. Leading the pack is giant-killer Smriti Irani who demolished Rahul Gandhi in the Amethi Lok Sabha election. The former Chandni Chowk parliamentary candidate is battle-ready. Union urban development minister Hardeep Puri, who is holding countless press conferences, is also ready to take on Arvind Kejriwal. Others vying to be the BJP’s face in Delhi are Manoj Tiwari, Vijay Goel, Parvesh Verma and Dr Harsh Vardhan.

Red faces in IMD
There are many red faces at Mausam Bhawanon Lodhi Road in New Delhi, housing the Indian Meteorological Department. The IMD specialises in weather forecasts. It had predicted a normal winter in a series of forecasts made a few months ago. But the severity of winter in northern India has proved IMD wrong. The Prime Minister’s Office has reportedly checked with Union minister for science, technology and earth sciences Dr Harsh Vardhan about the accuracy of IMD reports. Set up in 1875, IMD serves as a principal government agency in all matters relating to meteorology, seismology and allied subjects. Its charter of duty is to warn against severe weather phenomena like tropical cyclones, norwesters, duststorms, heavy rains and snow, cold and heat waves, which cause destruction of life and property.

Smoke out the left-libbers
The Rashtriya Swayamsewak Sangh (RSS) met in Indore for three days to assess ongoing protests against the Citizenship (Amendment) Act and the National Register for Citizens. Over 400 delegates were briefed by RSS sarsanchalak Mohan Bhagwat. Apparently, there are two views within the RSS. One section favoured a strong campaign for CAA and a counter-offensive against protesters, while some RSS leaders pleaded for a more conservative approach, to “wait and watch” how the Modi government handles the situation. Many delegates advocated samvad (dialogue) to correct apprehensions and to isolate “left-liberals” from the masses, who have certain “misgivings”.

LSTV versus RSTV
A high-level committee overseeing the merger of Lok Sabha TV and Rajya Sabha TV has not been able to come to a viable solution as new problems keep cropping up. Rajya Sabha TV wants the Lok Sabha staffers to move into their premises lock, stock and barrel. But LSTV personnel don't want to make any concession. A deadlock continues.