Like Buddha, the true teachers have always emphasised the need for retaining the equilibrium between the material and spiritual scales of life. 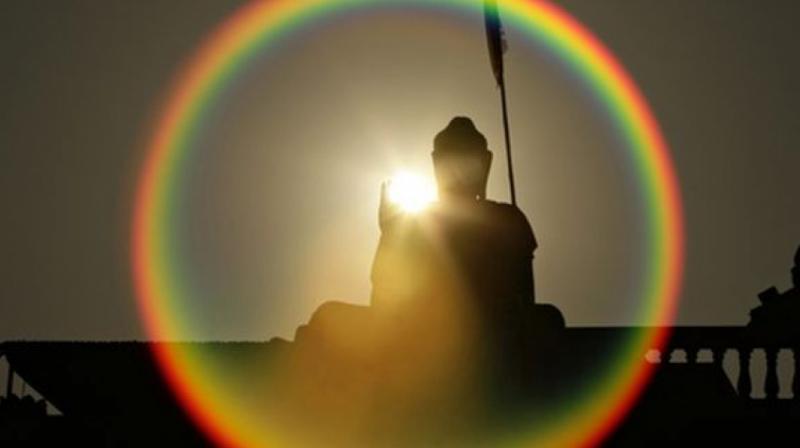 Buddha believed that knowing that all things are impermanent subdues the proud and gives hope to the wretched, encouraging them both to make spiritual progress. (Photo: AP)

Epictetus was born into slavery in the eastern outreaches of the Roman empire. Sold as a child and crippled from the beatings of his master, Epictetus was eventually freed. He rose from his bitter beginning to establish an influential school of Stoic philosophy. Epictetus dedicated his life to outlining the simple way to happiness, fulfilment, and tranquillity. Epictetus’ teachings rank among the greatest wisdom texts of human civilisation. His greatness lies in simple yet sagely suggestions on how one can lead an ideal life.

At the heart of Buddha’s teachings are the three great truths known as the Seal of the Tree Laws: first, “All things are impermanent,” that is, all things and phenomena constantly change; second, “Nothing has an ego,” which is to say, all things in the universe exist in interrelationship with one another; and third, “Nirvana is quiescence,” that is, the ultimate freedom lies in getting rid of greed, aggression and self-delusion. The law, or truth, “All things are impermanent,” refers to the unceasing changes occurring in our minds, in all phenomena as also in solid, physical manifestation of matter as trees and stones.

Buddha believed that knowing that all things are impermanent subdues the proud and gives hope to the wretched, encouraging them both to make spiritual progress. By his own action he showed the wisdom of moderation. He was born into a life of great luxury, and he soon got tired of it. Then he tried a life of excessive mortification, and before long he grew weary of that too. At last he chose a middle course and found true happiness in the doctrine of “nothing too much”. He taught self-control as against self-indulgence. He was equally opposed to the intoxication of lust, the intoxication of power and the intoxication of conquest. An obsession with physical pleasure, Buddha believed, is the sign of the diseased and its craving for mastery over the weak.

Like Buddha, the true teachers have always emphasised the need for retaining the equilibrium between the material and spiritual scales of life. In an analogy, the Sufi master Rumi likens the world to a river and the individual to a boat. In order to float the boat needs the support of water, but when the boat develops a hole the same water fills the boat and drowns it. Similarly, an individual needs certain basic necessities for his daily sustenance. But once these material things preoccupy his mind, they ruin him spiritually.

Sufis consider the spirit and body to be one whole. They believe in integration, not dichotomies. What we do in our physical lives affects us spiritually and vice versa. We cannot look at our lives in a vacuum. Spinoza says, “Nature abhors vacuum”. He might as well have said that life abhors a vacuum. “Life,” says Pavlov “loses its attraction when it no longer has any purpose. Those who commit suicides make away with themselves because they feel life has lost its meaning”.

Thus, the achievement of an ideal and perfect life is not restricted to any particular class of people, nor is it related with the degree of learning, wealth or power. It is a mindset that grows out of a pure heart. The Greek ideal of “the golden mean” and “nothing in excess” contains the true wisdom of life. Overindulgence in worldly pleasures leads to a state of ennui as the body needs to be tempered with the demands of the soul.

Is Indian cinema ready for own big Oscar moment?

India no more a beacon for democracy in South Asia?