Every avatar of Vishnu gave the gyan of the period. 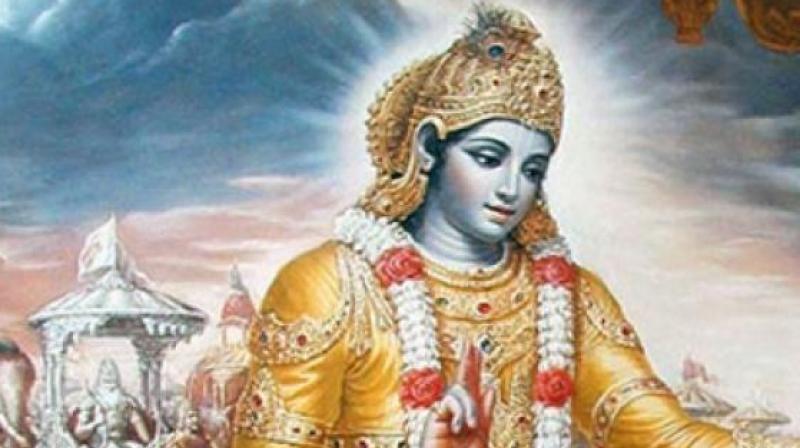 Karma is the fuel that propels a being on the journey of the spirit, good karma takes one to higher dimensions, bad karma takes him to worlds below. Connection with the guru catalyses this process, that is, the speed with which you go up or go down increases manifold.

Krishna took birth to explain the path of karma only. If his purpose was just to kill the Kauravas, he could have done it from Vaikunth only, in a matter of seconds. What is difficult for Vishnu? But he took birth and also became a guru, to tell that if a being does good where he lands, and what happens if he does bad. Whoever had a connection with Krishna, whether good or bad, reached where they wanted to. If you are connected to a force (shakti), it is impossible that this doesn’t happen. Even if a paap atma begins to improve his karma, he can pull himself up. Karma has to be performed, rest is the domain of Krishna.

There are two kinds of forces in creation — ones who work for the betterment of creation, and ones who work for destruction. It is on you, which of these you stand by and support. If you encourage a negative entity, it will first hold your finger, then your hand, and then the neck. And it won’t strangle you after that… it will jump into pits, which is assured by its karmas, and take you with it. At that time, you will not be able to let go of it.

And what lies beneath… has been described at length in our shastras, and is being observed by modern science.

Russians dug a 12-14 km deep hole into the earth, the Kola borehole. They would hear funny sounds emanating from the hole, and as they went deeper, temperatures became unbearably hot, enough to cook people, and sounds converted into screams, the screams of millions of tormented people. On going deeper, a bat like figure emerged out of the hole flapping its wings, as if saying “now I am free”. The scientists admitted seeing it, but said they don’t believe it! The project was halted, the hole shut permanently.

On another occasion, a team of American divers decided to explore the deepest trenches of the Bermuda Triangle. As soon as they reached the bottom, they signalled to be brought up immediately. Being revived from the shock, they revealed they had heard cries and screams of suffering humans. They got so scared that they left diving after that.

If Americans and Russians are agreeing on something, it has to be correct — and even our shastras describe it.

Hell is real, and a certainty unless one improves his/her karma. So start now, constantly improve karmas, be in the company of good (satsang) and leave the friends who have taken the downward path. If you do not do karma, reading this is futile, and even doing karma is of no use if you do not have a guru because karma gives energy for a good birth, the guru shows you the path. If you don’t have energy, you cannot walk and even if you have energy but you don’t know where to go, how will reach?

Every avatar of Vishnu gave the gyan of the period. Matsya avatar established the dominance of the creatures of the ocean, kurma avatar was the transition of power from the ocean to the earth, Varaha avatar established the power of earth. Vamana avatar taught that the entire brahmand is of Vishnu and the greater is the karma of a being, the more the lord will serve him. Vamana became the dwarpal of King Bali, such is the humility of the lord of three lokas. Narsimha established that no matter what is the level of evil, whatever it does, Vishnu has an answer for it. Punishment is inescapable. Parashuram showed us how a normal person has the capacity to do anything. If you are on the right side, Vishnu empowers you. Ram Chandra was born with all the sixteen powers, his name reverberates in all cultures. “Ram” means bestower of moksha, even Dashanan became entitled to moksha as he came in the sharan of Ram. Balram was the guru of Duryodhan, yet Duryodhan could not be saved, indicating that if you are a dushkarmi, then even if Narayan is your guru, you cannot be saved. Balram had to leave Duryodhan in an injured state. Krishna gave the gyan of karma.

And finally, in kalyug, the tenth avatar of Vishnu is awaited — Kalki, who is described as having a face of horse. If you look at gods, Lord Ganesh has an elephant head, Lord Hanuman has a monkey head. Kalki having a horse head indicates that gods themselves will descend in a particular form as man is doing neither listening, nor improving his karma. He going into agyan and encouraging agyan. So someone will be sent to restore order.

The beings of this yug have the opportunity to invoke his shakti, but this entitlement is only for those who have punya karma. So mend your ways, improve your karma. There is light and there is also darkness, the choice is yours. Do not stand on the side of asurs, because that would make you against Vishnu.