The PDP-BJP alliance’s agenda was drafted by the mufti’s Man Friday. 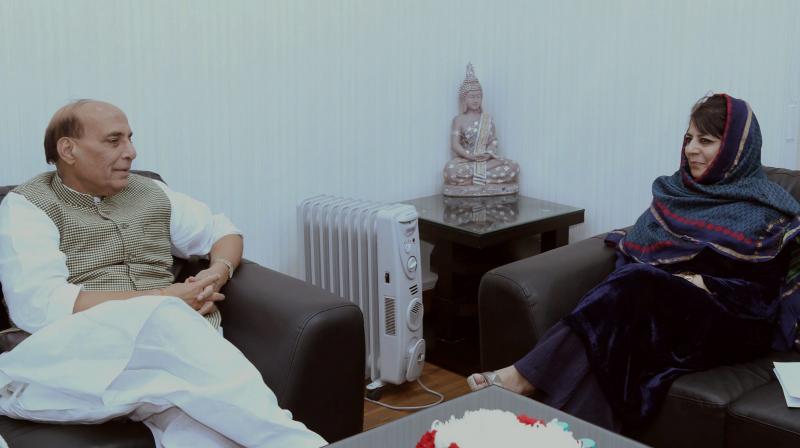 Prior to the Srinagar Assembly elections in 2014, the Rashtriya Swayamsevak Sangh (RSS) — which created Jan Sangh in 1951 and controls its successor, the BJP — declared from the rooftops that it sought to secure a majority. It reckoned on support in large parts of Jammu and a split in the ranks of Kashmiris in the Valley. The Hurriyat had consistently boycotted elections in Indian Kashmir, whether parliamentary or the Srinagar Assembly, for two reasons. First, they were rigged. Second, it did not accept the Constitution of India or of Kashmir under which elections were held.

To foil the RSS move, the Hurriyat relented, albeit unofficially. The BJP candidates all lost. It, however, succeeded to a significant degree thanks to the PDP leader’s (the late Mufti Mohammed Sayeed) insatiable lust for power, which his daughter and successor in office shares. The PDP-BJP alliance’s agenda was drafted by the mufti’s Man Friday, Haseeb Drabu (now finance minister), and Ram Madhav (BJP’s general secretary), a lifelong RSS activist. The RSS seconded him to the BJP in order to rivet its control over the party. The agenda conceded nothing of significance to the PDP; it bears the imprint of the RSS’ tight fist.

All this is well known. What escaped notice was that, as part of the bargain, the RSS secured for an activist the office of the Assembly speaker in order to block or interfere with debates, adjourn the House for partisan reasons, and ensure his party’s primacy in the coalition. This is just what the RSS’ Kavinder Gupta did no sooner than he was elected Speaker.

This alone suffices to prove the abjectness of the mufti’s betrayal of his people. They voted for him to keep the BJP at bay, instead he made a deal with it. For the very first time, the RSS acquired a presence in Indian Kashmir, on the seat of power and beyond. The leader of the RSS’ Vishwa Hindu Parishad, Surinder K. Jain, boasted last year in August that the RSS “is gaining” in Kashmir. In September of that year, the Kashmir Economic Alliance, an organisation of traders, raised the alarm on this development.

Both were proved right by speaker Gupta. On Sept 8, 2015, he publicly declared that he was “a proud RSS man”. MLAs shouted in anger when he arbitrarily adjourned the house, without transacting any business, to avoid debate on the beef ban. Casting aside the conventions and rules that bind the speaker to aloofness from party politics, Gupta participated in an RSS procession in Jammu on Oct. 25, 2015 dressed in RSS uniform. Anil Sethi, a respected city advocate, censured him: “It is unbecoming of a Speaker to participate in an RSS procession.”

None of this could have happened were it not for the respectability and encouragement that the mufti had provided. To the RSS, Kashmiris who object to Indian rule are “pro-Pakistan elements”. Accordingly, on May 28, 2015, Ram Madhav demanded that they must be arrested and completely marginalised.

Encouraged in 2015, it spread its wings further this year. On Oct. 8 it held a rally in Doda, a Muslim-majority district of Jammu, and another that was regarded as a move to incite passions in the Chenab valley. The president of the bar association alleged the police’s and the administration’s support of the rally. Muslim organisations observed a protest on Oct 15.

In the Valley, Mehbooba Mufti has banned processions by separatists for months. The difference is glaring. She calls for a dialogue and a political solution. Ram Madhav publicly snubbed her on Sept. 7, 2016. “Political solution” is a mere slogan raised by “romantic” people, he said.

As a committed RSS man, on Dec. 26, 2015, he said that India, Pakistan and Bangladesh will reunite “one day” and that the RSS “still believes” this. The implications for Pakistan and Bangladesh are obvious. No less so for Nepal and Sri Lanka. This body has been allowed a presence in Kashmir because the muftis saw in it the only organisation that would provide them with a few morsels of power — for a brief period.