Opinion   Oped  04 Jul 2020  First person: When there's gunfire outside, switch off the lights and wait for dawn
Opinion, Oped 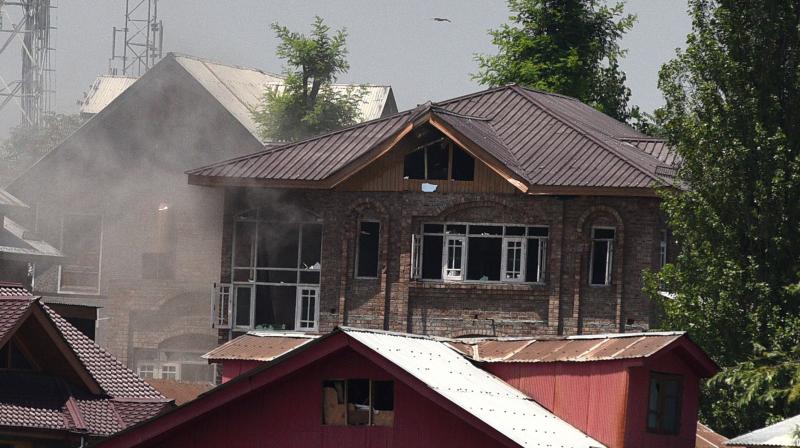 A house is left smouldering and damaged after yet another gunfight between security forces and militants in Srinagar. (File photo: Habib Naqash)

I was sitting with a guest, a saintly person from Tral, in our living room, chatting about the unending mayhem in Kashmir, and how it was ruining more and more lives across the valley with each passing day.

My wife and eldest daughter Umme Kulthum were busy in the kitchen and then preparing the dastarkhwan for meals in the distinctive Kashmiri way in the adjoining lounge.

My youngest daughter Fatima Zahra interrupted us to announce ‘Dinner is ready’.

Her elder sister Zainab brought ‘Tasht-Naari’, a pair of copper appliances with beautiful engravings of chinars and their entangled vines, traditionally used to wash hands before meals.

Suddenly there was the sound of gunfire outside and everyone got rattled. Lights were switched off in every house. We huddled inside a small room with only one window opening to the rear on the first floor.

As the firing intensified, Zainab started crying and my wife and I began narrating some of the experiences we had endured during the heyday of militancy in the 1990s and how we survived even in the worst situations in order to reassure her. We also emphasised "nothing can happen without God's will".

Fatima asked, "Okay we will not die before our time but what if our house is bombed or torched?”

She had in mind the destruction of a whole cluster of residential houses during a fire fight in the Nawa Kadal neighbourhood in Srinagar on May 19. The security forces had termed that damage as inevitable collateral damage but local people accused them of deliberately destroying the neighbourhood which rendered many families homeless.

I tried to comfort my daughter. “Nothing of that sort will happen here. It seems as if the militants are holed up in a house far away from ours.”

After the firing stopped, I started receiving phone calls from neighbours, relatives and friends -- some wanting to know what had happened and others inquiring about our well-being. Social media accounts were already reporting the “encounter” between the militants and security forces in our locality. A tweet from the Jammu & Kashmir police confirmed the gunfight. It said, “Encounter has started at #Malbagh area of #Srinagar. Police and security forces on the job. Further details shall follow.”

Since the firing had ceased, I told my wife and children and our guest that they should prepare themselves for a resumption of fighting, more intensely, at first light. Normally, security forces suspend operations for the night to avoid casualties.

But by quarter past midnight, we came to know that the ‘encounter is over’. The J&K police reported the death of one militant and one CRPF jawan in the clash.  It also claimed that it was a smooth operation during which no collateral damage had taken place. I looked at Zainab. She was still frightened. Umme Kulthum and Fatima sat silently, frightened nevertheless. My wife was in conversation with her sister who too lives in Srinagar over the phone to tell her ‘Khodayan bachaiv (God saved us)’.

On Friday morning, word spread in our neighbourhood that it had been a fake encounter. A resident claimed that the security forces entered the house of his neigbour after climbing over the compound wall and searched the premises. After coming out, he shot dead someone at point blank outside on the street. But how was the CRPF jawan (identified as head-constable Kuldeep Kumar) killed then? He had no answer to offer nor did the others who insist it was a “fake encounter”.

The J&K police said the operation was launched jointly by it and the 118th Battalion of the Central Reserve Police Force after receiving “credible inputs” about the presence of militants in the area. “During the search operation, the hiding terrorists fired on the joint search party. The fire was retaliated, leading to an encounter in which one terrorist was killed,” the police statement said.

The police identified the slain youth as Zahid Ahmed Dassm, a member of Islamic State Jammu Kashmir (ISJK) who, it claimed, was involved in a series of terror crimes including the June 26 sneak attack in which a CRPF jawan and a six-year-old boy were killed in the Padshahi Bagh area of Bijbehara in Anantnag district and that he had escaped from an encounter on June 30 in Anantnag in which two of his comrades were killed. It, however, did not say what happened to the others if “terrorists” were learnt to be present in the Srinagar locality on Thursday night as was mentioned in its statement.

Meanwhile, life looked like being ‘normal’ in our neighbourhood Friday morning. Thousands of people have perished and widespread destruction has taken place in J&K in the past three decades and still every morning starts with a new hope.