The 2014 statement was on Ramadoss’s pet peeve: Fake register marriages used to extort money from parents of innocent girls of his caste. 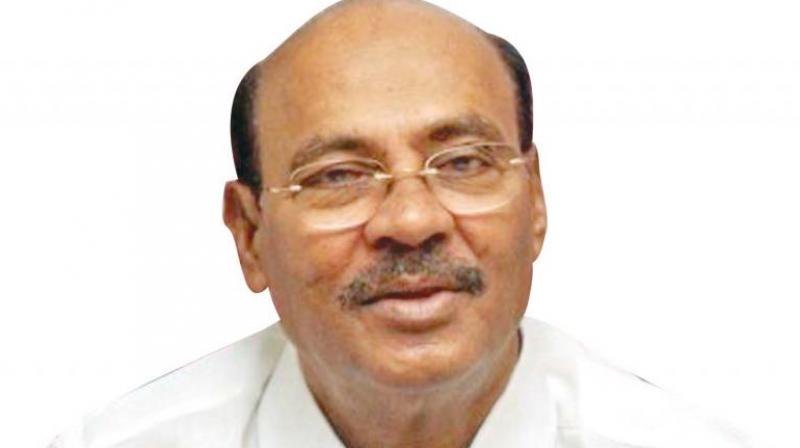 I do sense the power of films, in that movies have the ability to literally change people’s minds.
— Nicolas Cage

Much, much before Nicolas Cage spoke these words above, or was even born, politicians in Tamil Nadu, particularly those from the Dravidian stock, realised the power of cinema in shaping people’s thoughts and used the silver screen effectively for their ideological propaganda.

It would not be an exaggeration to say that one of the reasons for the DMK romping home to power in 1967 was films, particularly those scripted by the party’s leaders C.N. Annadurai and M. Karunanidhi, at a time when the national party, Congress, frowned upon cinema and lost out on the electoral and cultural fronts.

Since then, i.e. the 1960s, tinsel town has paved its own smooth access road to the political highway of Tamil Nadu, enabling many to straddle both cinema and politics the same time. For some political aspirants, a career in movies has handed out wild card entry into politics.

But all through the rough and tumble of Tamil Nadu history when the dividing line between politics and movies was getting blurred, the Pattali Makkal Katchi (PMK) stood out, looking down upon films and filmstars since its inception three decades ago until Draupathi hit the screens on February 28.

After taking his entire family and senior party colleagues to watch the film, the party founder, Dr S. Ramadoss, tweeted that the film was inspired by a statement that he had made in 2014, thus revealing that the movie, which has hence been slammed by most reviewers, has a direct link to PMK’s political views.

The 2014 statement was on Ramadoss’s pet peeve: Fake register marriages used to extort money from parents of innocent girls of his caste. As a politician, who initially spoke of larger issues like social justice and Tamil pride in general, Mr Ramadoss over the years confined his fight to the welfare of his caste group, the Vanniyars, and has been complaining since 2012 that smart young men from the Dalit community has been luring girls from other communities wearing “jeans, T-shirts and fancy sunglasses”.

So, even without the Vanniyar leader tweeting a copy of his 2014 statement that demanded a stringent law against fake registration of marriages, the leitmotif of the film was a clear giveaway that the director G. Mohan has been highly influenced by Mr Ramadoss and his drivel. For, the film has characters who try to woo women in that fashion.

Though Draupathi – the eponymous female character of The Mahabharata is a patron saint of Vanniyars – has been criticised for its retrograde theme, storyline, picturisation and the lack of any cinematic excellence in its making, Mr Ramadoss has recommended the movie for people to watch with their families, particularly daughters.

Another politician in Tamil Nadu who has pitched in for the film is BJP national secretary H. Raja, who wants all “grown-up daughters” to watch the film, which is expected to make girls dread the idea of falling in love with the man of their choice and also instill caste fanaticism in the minds of a viewer.

To put it otherwise, Mr Ramadoss lauds the film and promotes it because he believes that young women,, particularly those from his own caste, would be inspired to keep romance and marriage well within their caste frontiers, something which he has been propagating through his speeches and actions for quite some time.

What is revealing in the present context is that Mr Ramadoss has understood the futility of his crying from the rooftops and has hence taken refuge in celluloid, realising the potential of the medium in taking across his views to his own people in an effective manner.

In the past, Mr Ramadoss has felt that his own people, particularly men, were getting carried away by the onscreen gimmicks of actors and wanted his followers to shun movies. As an extension of PMK’s rigorous campaign against smoking — Mr Ramadoss’ son Anbumani Ramadoss as Union health minister banned smoking in public places – an attempt was made to sabotage the screening of Rajinikanth starrer Baba, in 2002, because the movie glamourised smoking.

PMK cadre had then tried to run away with the reels of Baba from movie halls, creating law and order situations in Vanniyar-dominated north Tamil Nadu region. Mr Ramadoss has also openly and vehemently spoken against the promotion of cinema culture, which he had suggested promoted decadence in society.

But now, he bats for Draupathi, which is a film at the end of the day. Not only did PMK cadre and functionaries filled up the theatres on the opening day, in some places even posters were put up to make it clear that the film has the approval of Mr Ramadoss. There was even a rumour that he had bankrolled the movie, officially touted to have been crowd sourced.

Whatever may be the case, Mr Ramadoss has seemingly overcome his inherent antipathy for cinema. But it has been too late. For a plethora of politicians and political parties has reaped the benefits of the Tamil people’s fascination for the cinema craze and established themselves as cultural and political icons.

Apart from writers like Annadurai and Karunanidhi, who pioneered the trend, prominent among those who captured the imagination of the people in the yesteryears through the silver screen were M.G. Ramchandran (MGR) and Vijaykanth. J. Jayalalithaa was not propelled into politics by her acting in movies but because she was co-opted into the AIADMK by MGR.

There are many others like Sarathkumar, T. Rajendhar and Radharavi who had made their bid and at the moment, there is Kamal Haasan, heading a political party, Makkal Needhi Maiyan, Seeman, spearheading Naam Tamizhar Katchi and Rajinikanth, all set to launch his own party soon, besides sitting MLAs Vagai Chandrasekhar and Karunas.

But Mr Ramadoss shedding his anathema for movies and finding in it propaganda potential is only cinema’s triumph. Perhaps it is that belated understanding of the medium’s power that impelled Mr Ramadoss not to rule out a future electoral alliance with Rajinikanth.