Opinion   Oped  03 Nov 2018  Politics of Unity: When size matters, and when it doesn’t
Opinion, Oped

Politics of Unity: When size matters, and when it doesn’t

The Empire State Building in that same city, traditionally renowned for skyscraping architecture, is a little above 318 metres. 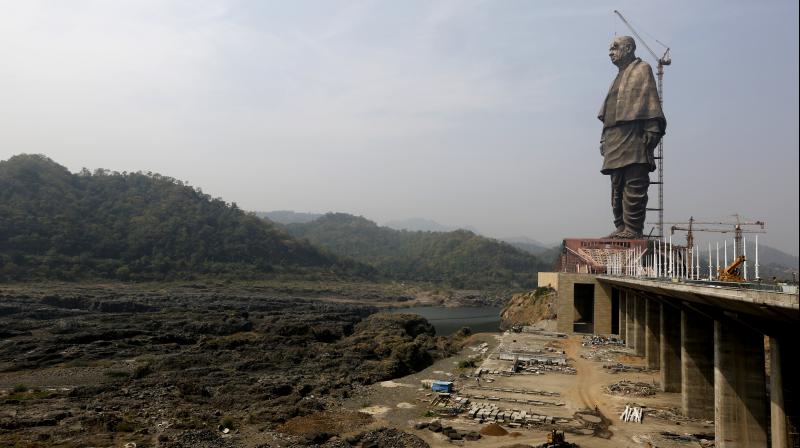 The 182-metre structure of Sardar Vallabhbhai Patel is touted as the world's tallest. (Photo: AP)

“I threatened the King of infidelity
With Infidelity.
I threatened the Satan of Lies
With Lies.
They looked down on me
With fragrant pity
The rose once blown
Forever dies.”
From Au Pair ka Khana Dupair ko by Bachchoo

They insist that size doesn’t matter, and yet the message fails to get through. Driving around Mumbai, one realises that the new buildings, rivalling the skyscrapers of New York or Dubai, are necessarily tall because they are crammed onto narrow slices of land and the developer’s dictum has ever been “vertigo is profit”.

I recall the sometime row over the then chief minister of Uttar Pradesh, the illustrious Ms Mayawati, ordering a cake the size of a small sports stadium for her birthday, paid out of the public purse. Okay, Jesus fed the multitudes from three loaves and a couple of fishes (forgive me if I’ve got the numbers wrong), so now, Ms Mayawati would feed them from a single confection. His was an act of charity combined with miraculous powers. Hers an act of charity combined with hubris and control over public money. Size mattered.

One may now ask if it matters in the commissioning and fabrication of a statue of Sardar Vallabhai Patel, which was unveiled by Prime Minister Narendra Modi and which is 182 metres high. That’s a lot of metres. The Statue of Liberty, which stands in New York harbour,  and which wasn’t paid for by the American taxpayer, but was a gift from the French nation, is a mere 46 metres high. The Empire State Building in that same city, traditionally renowned for skyscraping architecture, is a little above 318 metres. So not quite twice the size of the statue of Sardar Patel.

My personal preference with statues is to look them straight in the eye. I have been to Florence and seen Michelangelo’s statue of the biblical David which measures, from head to toe, 5.17 feet, which is, according to my phone’s calculator 1.6027 metres. Again, resorting to the above-mentioned calculator, which always tells the unblemished truth, David’s full stature in statuesque form is 1/113.55837th that of Sardar Patel’s.

This statue of David, who confronted and defeated the much taller towering Goliath with a sling shot, is acknowledged as one of Michelangelo’s greatest works and one of the finest works of art in human history. Michelangelo represented David as he imagined him in human form. Perhaps the biblical David, who may or may not have existed, did measure five feet and people who look at the statue can look him straight in his marble-blind eyes — providing they are not distracted by the rather realistic genitalia that the sculptor has not shied away from representing. In this case, size doesn’t matter.

Though I suppose it’s always remarked upon. In my childhood, a very short young man in our college went by the ironic nickname of lamboo and the very tall, lanky one was called shorty. The British Raj named Muhammad Ali’s Gujarati father “Jinnah” because he was very short and jeena in Gujarati means just that. His son Muhammad Ali turned out to be very tall and was still stuck with the surname Jinnah. His wife’s father, the Parsi Sir Dinshaw, was also dubbed “Petit” — being the word for small in French — as a description of stature. It became his surname and his daughter Ruttie inherited it. So Mr Tiny, the tall one, was married to Miss Tiny the Parsi and thereby hangs an ironic tale. He went on to found Pakistan and no one noticed that this particular Goliath was named after the size of David. And Ruttie changed her surname from small to tiny.

The statues of David and of St. Peter in the Vatican are more or less life-size because the artists wanted to portray human beings in classical form and not as mythological constructs. The Statue of Liberty with a subscript welcoming the poor and the wretched to the shelter of American democracy (What??? – fd. Iss panno mein US ka panga ley rahein? – Ay shuddup yaar!-Ed.) is larger than life so that seafarers crossing those waters can spot the torch and the promise of liberty she holds. That, apart from Hollywood movies featuring dudes with X-ray vision, flying ability and other machine-like capabilities, is the dominant myth of the US. The lady’s features may distinguish her, but they are not symbolic of anything as the beauty of David, the piety of St. Peter or the blandness of R2D2 are. In the same vein, the life-size statue of Gandhi in a seated position, his legs crossed in Tavistock Square in London, transmits tranquility.

Prime Minister Modi unveiled the statue on Rashtriya Ekta Diwas. By choosing a very prominent Congressman to represent the unity of the nation rather than, shall we say, Golwalkar, the PM has demonstrated his nonpartisan patriotism. The day of unity is of course dedicated to the assertion that all of us — Hindus, Muslims, Christians, Sikhs, Buddhists, Parsis, Jains, animists and others — are equals in a secular India. Does the PM want to convey to the bigots of our nation that unity means the absolute abandonment of discrimination, intimidation and “religiously” —inspired division, bullying and murder? Obviously the Unity Pledge that government employees and school students are scheduled to take on the day means just that?

This tallest statue in the world will undoubtedly attract curious or worshipful visitors. The one disappointment to their vanity will be that the only “selfies” they can possibly take will be of themselves next to the crumpled pyjama legs of the colossus.