The ‘Darbar Move’ in J&K belongs to another era, and it should be ended now. 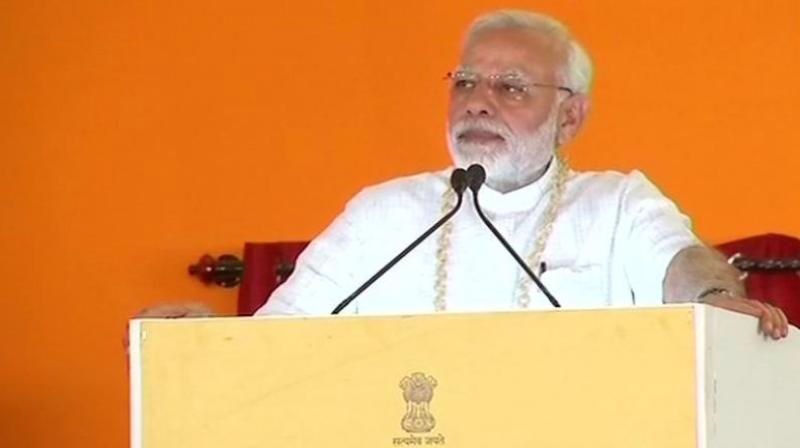 Prime Minister Narendra Modi talks about “Digital India” and in J&K you still have to carry truckloads of office files, computers, other records and even furniture from one capital to the other which involves heavy expenditure. (Photo: ANI/Twitter)

It’s sheer wastage of time
Maharajas may not be ruling the state of Jammu & Kashmir now, but displaying their princely traditions refreshes memories of their autocratic and self-centered rule twice a year when the so- called “Darbar Move” takes place from Jammu to Srinagar and vice versa.

In an era of sophisticated technology when even precious books and print media are losing relevance, in J&K, like Stone Age days, not only does every single file of the civil secretariat move from one capital to the other, each and every official from the chief minister to an orderly too shuttles between the two. One finds every citizen of J&K always curious to know the need of following the Mohammad bin Tughlaq kind of tradition twice a year. The Turkic Muslim ruler may have done it only once, but he is still being cursed for it.

The practice of “Darbar Move” not only makes a common man suffer but also results in the loss of many precious working days. From the state chief secretary to a clerk, the bureaucracy finds an excuse to avoid resolution of people’s grievances by passing the buck under the garb of “Darbar Move”. It takes 10 days to reopen the “Darbar” at either of the two capitals, thus 20 working days are lost every year. How can our ministers and government officials be different from their counterparts working elsewhere in the subcontinent?

While everyone fully realises and recognises the darker side of the “Darbar Move”, the regional and communal divide has forced those who matter to a position where no one can afford the political fallout of bringing this colonial and imperial tradition to an end. From New Delhi to Kashmir, rulers need to understand the demerits of this unwanted practice and take a bold initiative by making Srinagar the permanent capital of the state. It is located in the heart of J&K and making it the sole capital of the state would be politically and geographically correct. It is vested interests who find a communal and regional angle in every issue, otherwise one should not forget that J&K state used to be called the state of Kashmir in post-Dogra Maharaja times. Ladakh too has never been formally recognised as a separate division.

By all parameters Srinagar deserves to be the sole capital of J&K. Instead of wasting huge amount of money on the obsolete practice of “Darbar Move”, the government should focus on upgrading Mughal Road and Kishtwar-Duksum Road to make travel between the Kashmir Valley and the Jammu region easier and also reduce the distance between Srinagar and the Chenab valley and Pir Panjal regions, which constitute 70 per cent population and geography of Jammu division. Bad weather conditions can never be an excuse to continue with the “Darbar Move” tradition. If Himachal Pradesh can have only one capital, why not J&K. Moscow is the world’s third coldest capital city, where the average temperature in winter is minus 10ºC, whereas the average temperature in Srinagar, in winter, is around 3°C.

If Russia can have a single capital, then why can’t J&K? Let’s not forget also if bigger states like UP and MP can be run from one capital, why not J&K?
The writer  is the leader of the J&K Awami Itehad Party

It helps in binding people
Mohammed Yousuf Tarigami
It is said that the “Dubar Move” practice was started by Maharaja Ranbir Singh for strategic and climatic reasons. But many people now say that the practice belongs to another era; hence it must go. They also want Srinagar to be the sole capital of Jammu and Kashmir for its geographical and political position.

We don’t know whether the 19th century Dogra Maharaja had the interest of the people in mind when he took the decision to make Srinagar the summer capital and Jammu the winter capital of the state and embracing the unique practice of “Darbar move” or not. But what we know is that, as of today, it is something that does a great deal for the relationship between the people of Jammu and the Valley and helps towards keeping the otherwise politically and culturally dissimilar regions integrated. It is not just that the civil secretariat, the seat of power in the state, and other government offices and the high court shift from Srinagar to Jammu for winter (November to April) and then are housed again in Srinagar in summer (May to October). With that move thousands of families between the twin capitals. This leaves a positive impact on the people-to-people relationship. The “Durbar Move” provides them an opportunity to bump into and get to know each other.

Unfortunately, J&K has been plagued by religious and political polarisation lately. The gangrape and murder of an eight-year-old nomadic Muslim girl in Kathua revealed the depth of it. The psychological and perception distances are widening by the day. The politics of Hindutva, the rise in the sectarian agenda of pursued by the BJP and the RSS and their attempts to “saffronise” Jammu is like adding insult to injury. The BJP and its like-minded groups are playing divisive politics on almost every issue and, on the other hand, fundamentalists and religious bigots are seizing the same to influence the minds of youth of the Valley, which is proving to be a catalyst for spreading canards. The demands for the abrogation of Articles 370 and 35A, making Jammu a separate state and similar talk on one hand, and calls for separation and cessation on the other have pitted the residents of Jammu and Kashmir against each other. The gap between the two regions has only widened. This is a dangerous trend.

In this scenario the “Darbar move” provides a breathing space. It is a connect that helps in building a positive relationship between people and discourages those who play divisive politics and try to get people into fights. Therefore, the practice of “Darbar Move” is in the best interests of the state and its people.

I also want to stress the need for transfiguring the “Darbar Move”. Prime Minister Narendra Modi talks about “Digital India” and in J&K you still have to carry truckloads of office files, computers, other records and even furniture from one capital to the other which involves heavy expenditure. There is an urgent need to bring home ICT and Information Communication Technology and also to ensure that ordinary people in either region don’t suffer because the seat of power remains almost 300km away from them for six months.
The writer is J&K state secretary of the CPI(M)