Opinion   Oped  03 Apr 2017  The discreet charm of being single
India, All India

The discreet charm of being single

The fact that many of our politicians chose to remain single, might also lead us towards a few interesting questions. 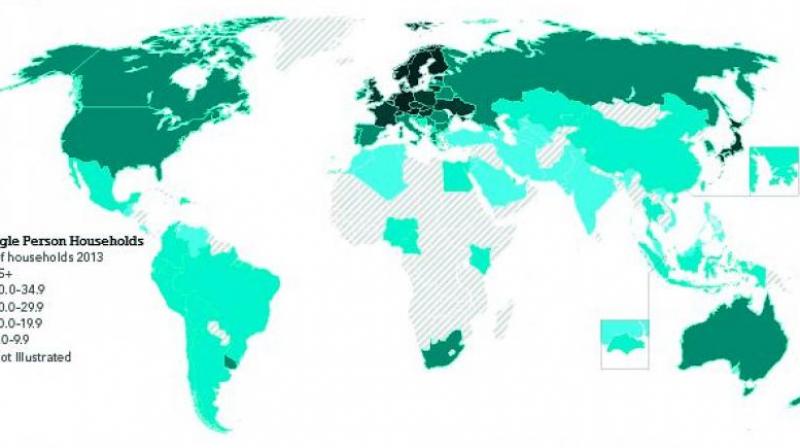 Hopefully, the rise of singletons in politics, led by Prime Minister Narendra Modi, will help in breaking the stereotypes associated with singleness and society stops questioning their personality or character.

In a trend cutting across all demographics, there is a rise in the number of singles. In the US, 25% of homes consist of one person; in India, over 75 million are single, a 40% rise a decade! In a country where marriage is the rule — almost cast in iron — how has this happened? Is it an indicator of the growing independence of the individual? Is society ready to deal with the new phenomenon of even women choosing to stay single?

Even after globalisation and liberalisation, singletons continue to be stigmatised in Indian society. Even when one makes a courageous choice to remain single, one also has to deal with the constant pressure from family, friends and relatives to get married.

I don’t know why it is so difficult for people to understand that being single could have its benefits. One could be more independent when they are single and living by themselves. They could be more open to being in small term ‘no strings attached’ affairs, while the engaged ones live their gigantic soap-opera-type-love-stories with a generous helping of pain and drama. Also it allows people to be more concentrated to their work than having a partner demanding a pie of your attention.

The fact that many of our politicians chose to remain single, might also lead us towards a few interesting questions. From Prime Minister Narendra Modi to the Didi of Kolkata to the late Amma of Tamil Nadu, all have been single and happy. There is a league of singletons that is ruling states. Trivendra Singh Rawat in Uttarakhand, M.L. Khattar in Haryana, Sarbananda Sonowal, Assam and 70-year-old BJD chief Naveen Patnaik from Odisha are some of the most noted bachelor chief ministers. The latest entrant is Yogi Adityanath from UP. We find such examples in every other discipline, be it arts, commerce or science. However, is there a correlation between singlehood and ambition? Perhaps, being single gives individuals the freedom to have greater control over their career and chase their dreams.

In the west, people are using online dating websites and apps to search for partners, but they are ready to wait till they find ‘the perfect match’. Even in neighbouring China, more than 20 crore people are singles. However, being single does not necessarily mean that they are alone. On the contrary, singles can have a better social life; stay connected with their friends more than the married ones.

As Bella DePaulo (PhD, Harvard), a project scientist at the University of California, in her invited address at the meeting of the American Psychological Associa-tion in August 2016 said, “Many reasons have been suggested for the rise of Unmarried America and research has supported the importance of many of them. They include, for example, socio-economic factors such as the challenge of finding decent-paying jobs and the desire to meet educational goals before marrying. I will make the case for a reason that is rarely acknowledged: Increasing numbers of people are single because they want to be. Living single allows them to live their best, most authentic, and most meaningful life.”

Single people often have stronger and healthier relationships with their friends, families and also lovers. The fact that they don’t need to look at reporting to someone or share the burden of rearing a child has its own fruits of benefits. With options like surrogacy and adoption, there is more flexibility in options. And often I have observed single parents tend to be more committed. I may be giving way to a new sterotype, but I will not shy from sharing that have seen children being brought up by single parents be more responsible, loving and independent than the two parent system.

From business tycoons like Ratan Tata to television empress Ekta Kapoor to proud parents like Tusshar Kapoor and Karan Johar, I believe it is about time that we celebrate singlehood and appreciate life to the less. I know enough single people who are strong and happy but who may not be as famous as the names above. Being single could be liberating, just as being in a relationship could also be satisfying. On that note, let’s raise a toast: Hail Singularity!