The image trumped the visual chaos of violence, and shored up hope with more self-assuredness. 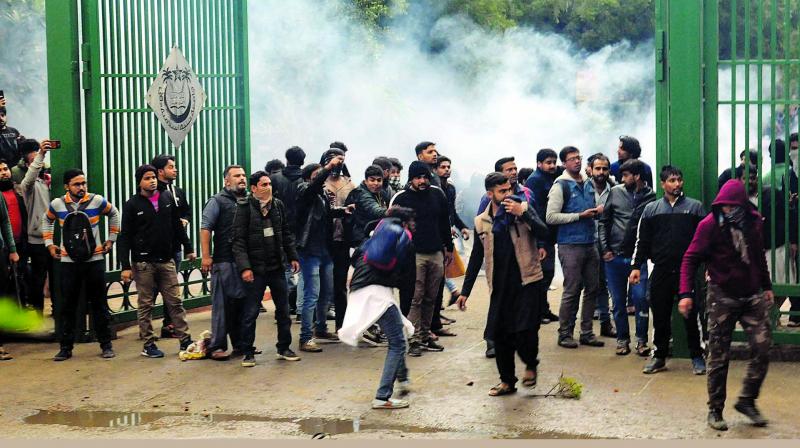 This man stood his ground the other day against a baton-wielding policeman at the Jamia Millia students’ protest In Delhi.

Symbolism sometimes becomes more real than the reality it shadows. Observing the dark times Indians are fighting against with a blend of grit and determination, I am reminded of the nattily dressed Omid, the blind man from Bamiyan in Afghanistan whose name spells hope.

Bamiyan is, of course, famous for its ancient Buddha statues and remembered with sadness for their destruction by the Afghan Taliban. Omid is a waiter at a restaurant that serves food in pitch-dark rooms. That’s the way this popular outfit in Canada does brisk business.

I remember a smiling Omid taking my hand firmly into his hand and nudging two others to line up behind me to form a train with our arms linked. Mobile phones were required to be switched off, not even a light-emitting wristwatch was permitted.

Threading his way in the lightless room through a clutter of furniture and people who could be heard munching but not seen, he led us to a table whose shape we have remained uncertain about. He served food without mixing orders. We groped and searched for cutlery, but decided to eat with fingers as a good option given the situation we were in.

Omid exuded confidence needed in his job as he negotiated the packed room avoiding furniture and people on the way. His worldview was imprinted in the stoic verbal interaction, which gave just a faint hint that he belonged to the Shia minority group of Muslims, vulnerable and targeted in a puritanical, Sunni-dominated Afghanistan.

It is well known that clarity of thought usually sharpens in the dark, a reason why people close their eyes to concentrate. Some of the best literature has come from the pens of people confined to dimly lit prison cells. Gramsci’s prison diaries have remained a perennial source of intellectual insights into a troubled world jousting outside the walls of what became for him an oasis of intellectual burgeoning.

Sitting with eyes shut for a stretch of time, getting momentarily into Omid’s shoes, can perhaps help one see the world with greater clarity than, say, would reading a newspaper or watching TV news do. The mind’s eye can perceive a small gesture of kindness before it becomes an invaluable link in one’s struggle against rampaging injustice and prejudice. A little noticed news item sifted from images of tragic bloodletting could become a truer anchor of support.

Newspapers, for example, highlight images of police brutality and the state’s indulgence of petty bias in the current Indian context, and that would move any of the young comrades to anger or action. Something that Omid would spur one to see with greater clarity though is the man with the janeo, the sacred thread worn across the shoulder by high-caste Hindus. This man stood his ground the other day against a baton-wielding policeman at the Jamia Millia students’ protest In Delhi. “I’m not a Muslim. Here’s my janeo. Hit me too since I’m protesting.” The image trumped the visual chaos of violence, and shored up hope with more self-assuredness.

From Kerala, a report spoke of a Christian church that gave space to Muslims to offer prayers as they both linked up in a march against a communally divisive new law imparting citizenship to everyone except Muslims from three chosen countries.

Images of determined Muslim men throwing a protective ring around a church in Peshawar quickly came to mind. Christians were targeted by Muslim zealots there. And Muslims came out promptly to protect the Christians from the zealots. That’s what rattles the toxic state most. Glimpses of another Gujarat are being woven into the narrative of state-backed communal violence in Uttar Pradesh where police under the command of an ignorant Hindu monk have gone berserk in Muslim localities. Historical reality challenges such easy assumptions. Uttar Pradesh is where the 1857 revolt began with Muslims and Hindus jointly fighting British rule. New videos have emerged of ordinary Hindus in the state vociferously rejecting the Narendra Modi-Amit Shah bias against Muslims.

The most reassuring prospect the mind can see in the new year is the unravelling of the Hindutva plot. And this is not something the youth from college campuses and universities have set into motion. Their role has been pivotal in spurring the opposition to Modi. However, it is comforting for the young men and women (actually in the reverse order) that there has been a political earthquake in Maharashtra, a source of immense confidence whether the students see it or not.

The revolt within the Hindutva alliance in Maharashtra has actually given spine to the students’ movement. It was no small deal for Udhav Thackeray, the head of the notoriously anti-Muslim Shiv Sena, to admit the other day that mixing religion with politics had been a mistake. It’s not an ordinary mea culpa but possibly a tectonic shift in the country’s political matrix.

The fact is that the Prime Minister and his home minister are riding a tiger. They will throw anything at the Opposition that would help thwart the street anger. The divisive citizenship law they ushered and the damaging citizen’s register they seem to be stepping back from tactically following intense pressure on the streets were both aimed at the state of West Bengal.

Suppose Mr Modi in his desperation to win at any cost decides to dismiss chief minister Mamata Banerjee’s government to set the stage to capture power in the state in 2021. Nothing is impossible after what he did with Maharashtra, where he tried to sneak in his own chief minister in a pre-dawn coup of sorts. Maharashtra stalled Modi and shored up the opposition. A critical historical fact is that the Marathas are the only cohesive force after the Mughals and before the British to have come

within a whisker of ruling India. They today comprise the core of the Indian state apparatus, straddling every wing of it, and, therefore, are not to be trifled with. This much again one can say with eyes closed.