As a senior NCP leader, Pawar was entrusted — most unwisely — with a paper containing the signatures of all NCP MLAs. 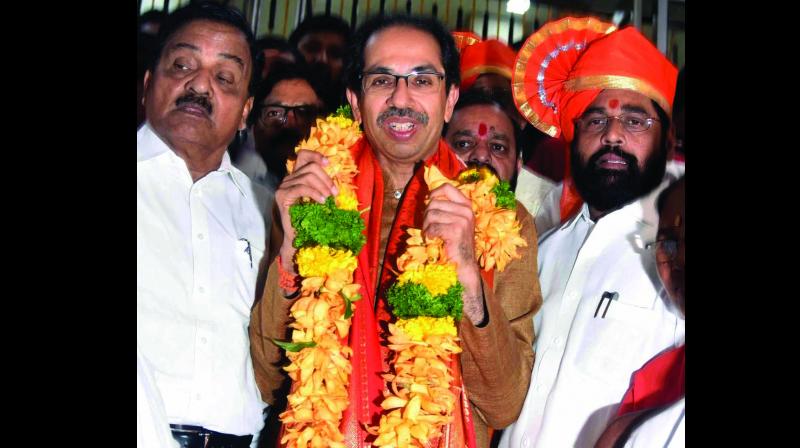 Maharashtra CM Uddhav Thackeray after the Shiv Sena-NCP-Congress alliance won the floor test in the Maharashtra Assembly in Mumbai on Saturday. (Photo: PTI)

The recent elections to the Legislative Assembly of Maharashtra sprang no surprise in yielding a hung Assembly in which no party had a majority.

In the Maharashtra elections the BJP won 105 seats; its 30-year-old ally the Shiv Sena won 56. But Uddhav Thackeray, the Sena’s leader, seeing the ground slip away under its feet by the assertiveness of the senior and arrogant partner, the BJP, laid claim to the office of chief minister alleging a prior accord.

The BJP denied the accord and refused the prize to its partner. They fell apart. Governor Bhagat Singh Koshyari, an RSS man, invited the BJP’s candidate, former chief minister Devendra Fadnavis, to form a government since his was the largest single party. The invitation was declined. President’s rule was imposed. But a Plan B was in the offing.

There was the Congress and its offshoot, the Nationalist Congress Party led by Sharad Pawar. His nephew Ajit Pawar, as ambitious as he was impetuous, had long nursed a grudge that uncle was overlooking his claims to preferment. He clandestinely established contact with Fadnavis and during in the night of November 22-23, entered into a shoddy pact with Fadnavis.

As a senior NCP leader, Pawar was entrusted — most unwisely — with a paper containing the signatures of all NCP MLAs. These he submitted to the governor along with his own covering letter supporting Fadnavis’ claim to be called to form a government.

Governor Koshyari, shutting his eyes, acted on this “documentation” without raising the most elementary question as to the veracity of the offers of support. It was the dead of night, after all.

Events ran at breakneck speed lest dawn aborted the ruse. The deal was finalised at 11.45 on the night of November 22. Hours later, at 2.30 am, the governor recommended revocation of President’s rule. This requires the Union Cabinet’s approval. This was done at 5.47 am by Prime Minister Narendra Modi invoking, most improperly and illegally, an exception in the rules of business to meet circumstances of dire emergency.

At 7.50 am, the governor administered the oath of office to Fadnavis as chief minister and Pawar as his deputy. Less than an hour later Modi congratulated both.

The rest of the drama need not detain us. The Supreme Court ordered a floor test. Ajit Pawar ditched the Fadnavis fold.

The night’s pantomime was, of course, choreographed by Narendra Modi. Only the Prime Minister could have used, rather abused, the exception clause in the rules to dispense with the Cabinet’s prior approval to the revocation of President’s rule.

The sordid episode yields two lessons, political and constitutional. It reveals the depths to which Modi will stoop to grab power. His publicly proclaimed ambition to secure a Congress-free India was a euphemism for BJP rule in every single state. He began by undermining the Cabinet and went on to suborn the President’s independence.

The Maharashtra episode exposes his true colours. But his defeat there has also raised the Opposition’s morale — Modi is not invincible. He can be made to bite the dust if only the Opposition were to unite.

Constitutionally, it shows that the fears expressed over Indians’ incapacity to observe the norms of democracy were all too true. A century ago, C. Rajagopalachari predicted in his prison notes “elections and their corruption, injustice and power and tyranny of wealth, and inefficiency of administration will make a hell of life as soon as freedom is given to us. Man will look regretfully back on the old regime of comparative justice and efficient, peaceful, more or less honest administration. The only thing gained will be that as a race we will be saved from dishonour and subordination.”

Indians grasped the mechanics of the parliamentary system but not its culture, still less its morality. As Balfour wrote in his introduction to Bagebot’s classic The English Constitution: “Constitutions are easily copied, temperaments are not; and if it should happen that the borrowed constitution and the native temperament fail to correspond, the misfit may have serious results. It matters little what other gifts a people may possess if they are wanting in those which, from this point of view, are of most importance. … The successful working of British institutions may be difficult or impossible. It may indeed be least possible where the arts of parliamentary persuasion and the dexterities of party management are brought to their highest perfection.”

As for Ajit Pawar’s double act, one is reminded of Lloyd George’s swipe at Sir John Simon: many a member had crossed the floor of the House but none left behind such a slimy trail.