Given the less-than-ideal economic scenario, a nationwide complete lockdown was bound to have a considerable impact on the economy 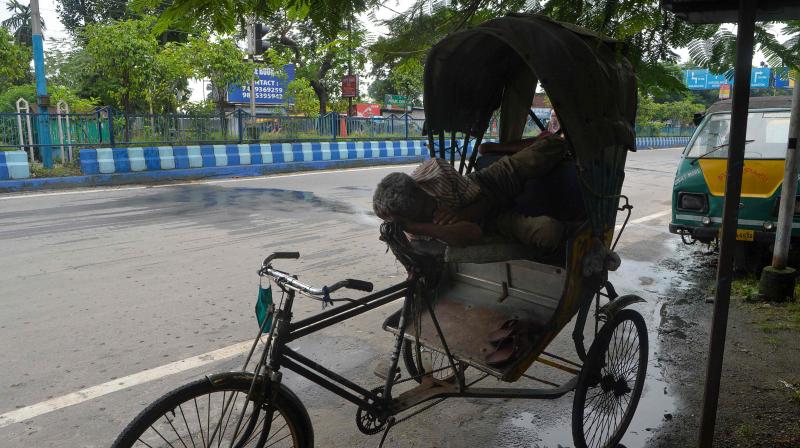 A rikshaw puller rests near a deserted road during a day-long state-imposed lockdown as a preventive measure against the surge in Covid-19 coronavirus cases in Siliguri. PTI Photo

Not that India’s economy was any better when the year began. It was already being held responsible for pulling down the overall global economic forecast, with the IMF revising its growth forecast for 2020 from 7 per cent to 5.8 per cent. The IMF blamed the downward trend in domestic demand for the revision in the growth figure. In addition, the two-year low in credit growth and the poor state of the construction sector continued to hurt the economy.

Given the less-than-ideal economic scenario, a nationwide complete lockdown was bound to have a considerable impact on the economy. However, Thakur’s statement on March 18 only highlighted the Centre’s obliviousness to the quagmire that lay ahead for the economy.

The Indian economy contracted 23.9 per cent in June quarter vs March quarter’s 3.1 per cent growth. The quarterly slump is said to be the worst in Independent India. Among the G-7 nations too, no economy has contracted more than India, with the UK being the worst affected after a -20.4% decline.

This is significant as the period coincided with two rounds of complete lockdown periods and the first phase of the gradual relaxation of norms to enable economic activities. This was also the period when coronavirus went out of control in India, with guest workers acting as the virus’ vector. Between April 1 and June 30, the number of coronavirus cases increased by 28,350 per cent – 2,059 to 5,85,792.

It can thus be inferred that the complete lockdown and the gradual relaxation of rules to kickstart economic activities did two things – increase the number of corona cases and accelerate the economic decline.

As per the Reserve Bank of India’s latest report, India’s economy will contract by 4.5 per cent in 2020-21 (April-March fiscal year). The RBI report observed that there was some uptick in some economic indictors in May and June, when the lockdown was eased, pointing towards the existing pent-up demand. However, it added, “(The upticks) lost strength in July and August, mainly due to re-imposition or stricter imposition of lockdowns, suggesting that contraction in economic activity will likely prolong into Q2.”

Moreover, the Google Mobility Trend, which tracks movement of people as a reflection of underlying economic activity, picked up in June but stagnated in July – coinciding with individual states re-imposing stricter lockdowns. This also showed that the confusing timelines imposed by the states and the Centre not only failed to stop the rampage of coronavirus but also jeopardised normal economic functioning.

Other indices falter amid lockdown

The Index of Industrial Production shows the real production output. Eight core industries that constitute 40 per cent of the total weight of IIP. The production in the eight core sectors -- coal, crude oil, natural gas, refinery products, fertiliser, steel, cement and electricity -- showed a slight improvement in July, contracting to 9.6 per cent as against -12.9 per cent that was witnessed in the month of June.

However, it is not something to be happy about as this is the fifth consecutive month of contraction – four of the months covering the whole lockdown period.

The GVA is a measure of economic productivity to check the contribution of an entity to the economy, while accounting for the impact of subsidies and tariffs on products.

While the indices and GDP growth numbers provide a macro-economic picture of the state of affairs, the real impact of the economic downturn due to the prolonged lockdown and ‘unlocks’ can be seen from the sordid tale of unemployment numbers and steep decline in consumption.

As per the RBI report, consumption – accounting for some 60 per cent of GDP – in transport services, hospitality, recreation, and cultural activities fell considerably in during the pandemic.

During an emergency, households would generally focus on essential goods than anything else. Household consumption of FMCG products in April-June 2020 was the highest in the last two years, as per one report. While the latest data is unavailable, COVID-19 will definitely have a sharper impact on household incomes due to the spate of job losses and salary cuts.

Coming to job losses, the Centre for Monitoring the Indian Economy estimated that at least 1.89 crore salaried people lost their jobs between April and August. However, the real impact of the crisis will be in the informal sector, which is the source of income for over 90 per cent of work force.

As per one report, at least 12 crore people have lost their jobs since the lockdown. However, the impact has been more profound on wage labourers and small traders, who constitute 75 per cent of the unemployed.

There are some bright spots even in the gloom of coronavirus-induced lockdown. Rural India is seemingly untouched by the impact of the lockdown, highlighted by the fact that fertiliser segment, which continued to grow for the third straight month in July. In addition, tractor sales picked up by 38.5 per cent in July, while motorcycle sales eased out in July.

However, there are two issues that rural India could face in the coming days: The surge in rural corona cases leading to stress on health infra and muted wage growth due to migrant crisis.

With the private sector under stress to restructure their businesses that have been impacted by COVID-19-induced lockdown, the public sector would have to take the lead in capital investments.

However, the states and Centre are already reeling under fiscal deficit, aggravated by the costs of fighting COVID-19-related crises. India's fiscal deficit in the April-July stood at Rs 8.21 lakh crore as against Rs 5.47 crore year-on-year.

The rise in fiscal deficit has to be seen in connection with the shortfall in GST receipts and the tussle for compensation between states and Centre. The GST shortfall in the current fiscal (April to March) is Rs 2.35 lakh crore, while Rs 1.38 lakh crore is the impact of COVID-19 on states’ revenues.

The compensation issue has put fiscal federalism at stake, with the Centre seemingly abandoning its Constitutional responsibility to pay. Instead, the Centre has put the onus of raising the deficit income on the states. This development could either turn out to be a gamechanger or an unmitigated disaster.

Considerable economic restructuring would be the way forward for India to get out of this unending chakravyuh. The RBI report said, “Public investment funded by the monetisation of assets in steel, coal, power, land, railways and privatisation of major ports by central and state governments could revive private investment. In fact, GST Council type of apex authorities can be set up in respect of land, labour and power to drive structural reforms.”

A McKinsey & Co report urged the government to focus on generating jobs, indicating that the COVID-19 crisis is the moment India could reboot itself. However, its suggestion hinged on the point that India must first resolve pre-COVID-19 issues like slowing growth and flat unemployment.

If India undertakes required reforms like by 2023, the report said, India could create 90 million non-farm jobs by 2030. In the absence of any meaningful reforms, the third decade of the 21st Century could end up becoming India’s “missing decade”.