In India, we are dealing with tricky age issues as well. Age… and a dramatic shift in attitude, as symbolised by two newly-minted parliamentarians. 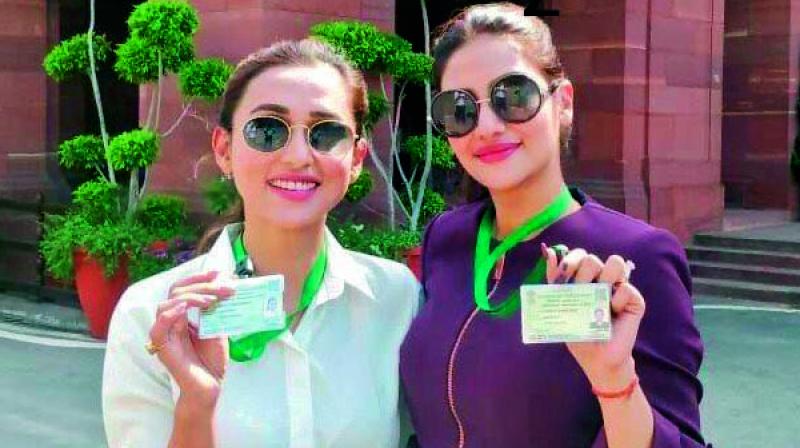 Kya karoon Ram mujhey buddha mil gaya…” If you can recall this  Bollywood song effortlessly, it shows your age! It’s from one of Raj Kapoor’s biggest commercial hits called Sangam (1964). Picturised on Vyjayanthimala, it had the lovely lady teasing and taunting the hero (Raj Kapoor), by referring to him as a “buddha” (old man). I was humming this song all morning while absorbing two entirely different news stories. One, which had nothing to do with Indian politics, was a short, gossipy, international news clip about Vladimir Putin’s girlfriend, Alina Kabaeva (36) — often referred to as “the secret First Lady of Russia” — giving birth to twin boys. Putin, who has two grown-up daughters from his ex-wife, has become a new dad again, at age 66. The twins will grow up with an absentee dad who is 30 years older than their mother. Age is a nasty issue all over the world. When Madonna candidly declared, “I am being punished for turning 60!”, she was confronting a horrible truth! Her latest concert was panned by critics, most of whom were younger than her kids. Was it really because her voice had changed and her music fell flat on stage? Or because society is uncomfortable with a woman of 60, dressed in a sexy corset, fishnet stockings, killer heels, belting out songs while well-muscled backup dancers gyrate suggestively around her? Madonna still looks hot. And that is the problem: Putin is super hot, too. But that is not a problem at all. Nobody is “punishing” Putin for fathering twins at 66.

In India, we are dealing with tricky age issues as well. Age… and a dramatic shift in attitude, as symbolised by two newly-minted parliamentarians. I am referring to the social media hysteria after Mimi Chakraborty and Nusrat Jahan appeared outside Parliament House dressed in trendy outfits which provoked the chatterati to attack the lissome ladies from Mamata Banerjee’s Trinamul Congress. The criticism had to do with many socio-cultural aspects, the main one being an outdated mindset that refuses to move beyond fuddy-duddy notions of “appropriate” attire for MPs. Come on. They didn’t arrive clad in bikinis! They boldly chose contemporary outfits — a pantsuit and jeans. Okay — I have a problem with jeans in Parliament. But I am not going to suggest a ban on denims for parliamentarians. What fascinated me about the image of two young and beautiful girls confidently posing for photographers is how in one swift stroke so many moulds were instantly broken. It was a bold decision for my Mimi and Nusrat to shed convention and dress according to their personal tastes. Great! I totally love the breaking of rules, and let’s face it, India is a young, young, young nation — the average age of today’s MPs is 54, while the median age in India is 27.9 years. Mimi and Nusrat are the perfect representatives of this demographic. Why should they not set the trend for other young parliamentarians who may follow their lead and discard the more formal saree or salwar kameez in favour of pantsuits? This is not only about sartorial choices. It is about making a strong statement which screams, “Wake up! We are today’s Indians. And we don’t have to conform to some antiquated dress code, okay?”

The two young women were trolled for choosing “Western” attires. A few days before their debut in New Delhi, the media in Mumbai had publicised a new initiative by our local railways, switching the signage over toilets for females. The new graphic depicted a “modern” woman dressed in a business suit. Out went the ghungatwali aurat! There was public outrage over this harmless switch, with the old guard wondering what was happening to our society when even signs over railway public toilets for women ditched the saree for a jacket. The strong over-reaction to this change may appear innocuous and silly to our youth. After all, lady commuters are mainly working woman on the go! But scratch the surface and you will see the real reason for so much resistance to a painted sign. The older generation is not willing to concede even this much!

The desire to hang on to the status quo remains strong across India. Senior citizens are experiencing a great deal of insecurity and feeling threatened by so much social churn taking place this rapidly. If even a buzzed and buzzing metropolis like Mumbai has reacted negatively to the railways’ initiative, imagine what Nusrat and Mimi are facing… and will continue to face as they stride into Parliament, dressed on point and looking smashing! Imagine the consternation on the faces of some of our octogenarian parliamentarians as they see these young things smoothly replacing the “puraney zamaney waley log”. Imagine too, what the established, older female glam brigade of parliamentarians like Hema Malini and Kirron Kher will feel when photographers ignore their arrivals and departures while focusing on Mimi and Nusrat. Maybe, like it happened with airport looks popularised by young Bollywood stars, we may now get Parliament looks spearheaded by these two fashionistas. Gone are the linen/khadi/Chanderi sarees. Gone too, the Kanjeevarams and Tangails. High street fashion comes to our magnificent Parliament. And it’s not just the girls who are setting new fashion goals!

Gautam Gambhir may herald a welcome change for men. Ditch the sorbet coloured kurtas and bundis, fellas. That’s so yesterday! Get your T-shirt and chinos game on! At the grander than grand swearing-in ceremony, I expected Narendra Modi to raise the sartorial bar and turn up in yet another avant garde outfit. But no! He played it safe by sticking to a steel grey “Modi bundi” to match his steel grey resolve. His Cabinet colleagues followed suit. Even our Bollywood brigade gracing this momentous occasion refused to make fashion waves on this red carpet. Our only hope for breaking convention and bucking conformist rules are the belles from Bengal. Ladies, please don’t let us down and change gear! As for the buddhas and buddhis wondering what to do with their dated wardrobes — make curtains! The optics have changed overnight — tune in. India itself is unrecognisable now.