The Macron-Trogneux marriage has brought an intriguing “cougar” thrill to the elections. 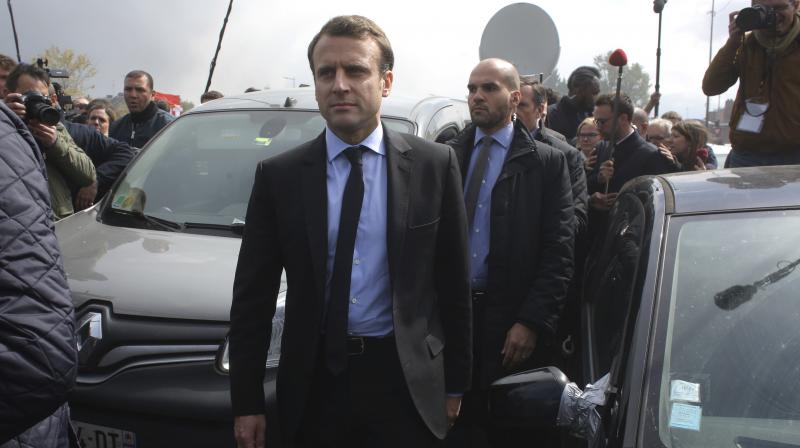 Now, thanks to French presidential hopeful Emmanuel Macron, the discussion is all about younger men and older women. In fact, this breaking of the stereotype is something everyone welcomes for more than one reason. Not only did Mr Macron stick to wife Brigitte Trogneux , his childhood drama coach, more than two decades older than him, all these years — he might even be the one to stall the rise of Marine Le Pen.

Of course, whilst we do appreciate that women need to break the glass ceiling and lead the country — this is one ceiling that, for now, we might not particularly want broken. The extreme right-wing Ms Le Pen might bring much more pain to an already fractured world polity.

Fortunately the French, who are happiest when interesting relationships are being discussed, are very nonchalant about the possibility of Ms Trogneux becoming the First Lady — even though it provides fascinating media fodder. The French media is used to Presidents who are caught philandering or conducting liaisons with gorgeous young women.

The Macron-Trogneux marriage has brought an intriguing “cougar”  thrill to the elections.

(Women who have relationships with younger men are distressingly called cougars, making it sound like they prey on younger men. Perhaps after this election we need to change the term to something more appealing.) But more importantly, it will destroy a stereotypical patriarchal belief — that only older men can attract younger women.

Why should it not be the other way around?

Our very own Freida Pinto had also launched into a similar relationship with Dev Patel, six years younger than her during the making of Slumdog Millionaire. She has now said in an interview that age doesn’t matter in relationships: “You're in it because you love the person. Things like age and wealth, none of it matters. You make it work, that's it.”

In their case, the relationship did not last — and Dev Patel now has a new partner. However, Ms Pinto has managed to succeed in a very difficult environment — often landing roles that have given her an undoubted edge over other Indian actresses such as Deepika Padukone who have not yet broken into the “A” listers of Hollywood. Ms Pinto to her credit has already featured in an Oscar-winning film and another directed by Woody Allen. She will now appear in a London-based series about the British Black Power movement set in 1971.

While it might appear to be the year of the older woman — not everything that women of a certain age do succeeds. Joanna Lumley, an actress with an Indian past, came up a bit short on her plans to create a garden bridge over the Thames in London. She is now taking pot shots at mayor Sadiq Khan (who also has an interesting Indian connection) for having stalled the scheme. This, actually, could have been a spectacular London sight, apart from adding a very pleasant way to stroll over the river.

The bridge had got the full support of former mayor Boris Johnson (another Indian connection there through his wife). But now the mayor has raised queries how the 60 million of public money had already been spent by the Garden Bridge Trust, before the agreement had been signed for the final land deal.

(For most of us, £60 million could build several bridges, but then we are not the decision-makers!).

This attitude has upset Joanna Lumley, who undoubtedly had a wonderful vision of the bridge which would feature hundreds of trees and plants.

The mayor has regretted that the planning permission might expire before the agreement is reached. It is sad to know that £60 million of people's money might have flowed down the Thames. Is there no way to rescue the scheme ?

While the Battle of the Bridge is underway, let's look at the Partition connections of the characters concerned.

(As we are setting up the Partition Museum at Town Hall, Amritsar, this aspect is fascinating.)

Ms Lumley was born in pre-Partition India in 1946 in Srinagar, where her father served in the 6th Gurkha Rifles, in the British Indian Army. In fact, it is her birthday today. So we can all send her our good wishes.

Sadiq Khan’s grandparents were from the Bombay Presidency and moved to Pakistan in 1947. His parents then migrated to London where Sadiq was born.

And we all know that Boris Johnson married a gran-niece of my very dear friend, the legendary Khushwant Singh, whose family had migrated from West Punjab (now in Pakistan) . So the complicated tapestry of our intertwined lives looms large!

Talking of the Partition Museum, please do join us tomorrow (May 2) at the Nehru Centre at South Audley Street in London for a talk and presentation on the progress being made on the museum in Amritsar. The plans to inaugurate it within this year are now being put in place, and we do hope that Partition-affected families and others who are interested in supporting the cause will join us!

This is a people's museum  being built through contributions from the people, from all over the world.