Those are the people that British Prime Minister Theresa May represented as she sent the divorce papers to the European Union secretariat. 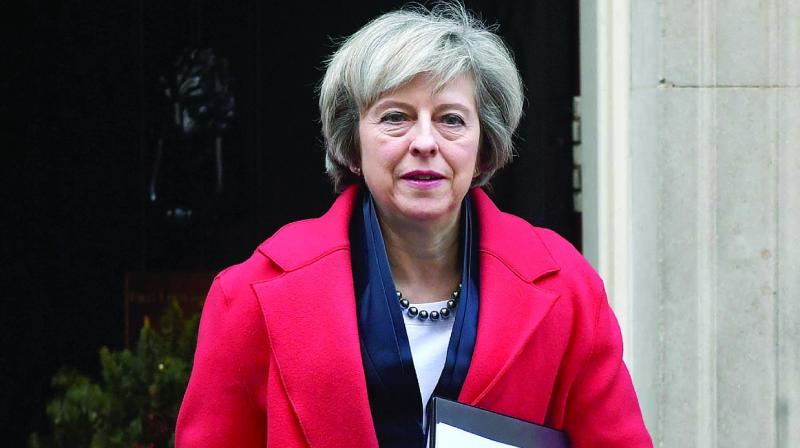 Roses are red my love
Violets are blue
Jackfruit is green and pokey
outside
And yellow and stinky inside
This poem is supposed to say
something nice
But is gleefully taking you for
a ride.
From The Ballads of Bachchoo Ka Adda

Some divorces are a matter for celebration. Who was it who said: “never treat separation as a tragedy, always as an opportunity”? On March 29, Britain sent a letter, the equivalent of the triple talaq to the European Union. “We divorce you, we divorce you, we divorce you — so, now guys, what’s the deal? Or even “que est que c’est la deal” or “was fur eine deal canst wir gerbrokeren?”

In backward Britain, there was forward rejoicing. There were those old enough to remember the Second World War, who were always suspicious of any deal with the Germans. There were those who believe, against all factual evidence or statistical accounting, that “immigrants” from Europe are being allowed access to take their jobs, flood their schools with children who bluff their age and can’t speak English, crowd their hospitals, suffering from unspeakable foreign diseases and living off unemployment benefits.

Those are the people that British Prime Minister Theresa May represented as she sent the divorce papers to the European Union secretariat. They profess that they are not racists. They say they want their sovereignty back, but when asked repeatedly by the media which EU regulation they object to they inevitably come back to immigration. They don’t want foreigners to come here. They are lemmings heading for the cliff, but they are represented by power-hungry politicians, who are playing upon their prejudices in power play of the Tory Party.

There is Ms May, who campaigned in the referendum to remain in the European Union. After Britain voted 52 per cent to 48 per cent to leave, she switched her opinion to “support democracy” and put herself forward as the candidate who could unite her party. So yes, here was a politician who wanted to remain in the European Union and argued for its advantages, now putting herself forward as the champion of leaving it. “Wah wah!” as we qawwali audiences would say when the singer changed key.

Then there is David Davis, who has been appointed as the minister to negotiate Brexit. He has stood in two elections to be the leader of the Tory party and not made it. Here is his last chance to shine as more than a backbench, time-serving MP. Nevertheless, he is, despite the sad ambition, an honest sort of fellow and he keeps telling the press and public that the forecasts of great progress when Britain leaves the EU are dodgy and he can foresee a few things that the British population who voted to leave Europe didn’t realise. For instance, he says that doing a deal with Europe now may not result immediately in a bar to immigrants. In fact, it is possible that there may even be more immigrants per year than the “leavers” wished to ban. Then there’s Boris Johnson, a loudmouth who made a bid to be Prime Minister after campaigning as a “leave”walla in the referendum.

At the last minute, after David Cameron, the PM who gambled on calling the referendum lost it and resigned, Mr Johnson declared he wanted the job. As his party was about to elect their new leader, his strongest ally and supporter, the minister for justice, Michael Gove, publicly announced that Mr Johnson was temperamentally unfit to be PM and that he was standing instead.

They both lost. Had I been his confidante I would have sent a copy of Shakespeare’s Julius Caesar to Michael and he may have understood that neither Brutus nor Cassius would succeed Caesar after they stabbed him in the back.

A historian called David Starkey has remarked in the British media that this is not the first time that Britain has asserted its independence from Europe. Henry VIII, for his own reasons, broke in the 16th century from the Catholic jurisdiction of the Pope in Rome. At the time, temporal and spiritual power was divided between the monarchs and nobility of Europe and the Pope. The kings and dukes were in charge of temporal affairs and the Pope governed the hierarchical appointments of the Catholic Church and collected revenue from the Catholic states. Very many popes also interfered in military matters.

Henry VIII broke with the Catholic papacy and isolated England from even the spiritual jurisdiction of the nation. He would, as head of a new church, appoint its archbishops and its clergy. Has England inherited its anti-European sentiments from that breach?

Even if that’s the subconscious ideological inheritance, it’s time to abandon it. Britain’s governments, since Ted Heath joined the European Union and Margaret Thatcher sanctioned the import of cheap Polish coal and destroyed Britain’s coal industry, understood and acted on the universal diktats of capitalism.

Britain’s break from the EU is a step into an abyss. Forty per cent of Britain’s exports go to the 27 countries of the European Union under its free trade agreements. A slightly larger absolute figure flows from the whole of Europe to the UK.

The Brexit-wallas make the false argument that because the EU exports more to Britain than the other way round, the EU stands to lose by imposing tariffs or ending favourable trade. They fail to point out that Britain would lose 40 per cent of its exports if the deal didn’t go through and the 27 countries of the EU would on average lose 1/27th of their markets. Would they care?

The ban on immigrants from Europe would leave Britain with a crippled National Health Service, which has a large workforce of doctors and nurses from the continent. The service and construction industries would also be seriously affected. And the City of London, which provides financial services to Europe and is one of the capital’s wealthiest assets, could go, so to speak, bankrupt.