Sridevi: A superstar till the end

The suddenness of it all made the reservoirs of goodwill that her fans and the public at large had for Sridevi spill over. 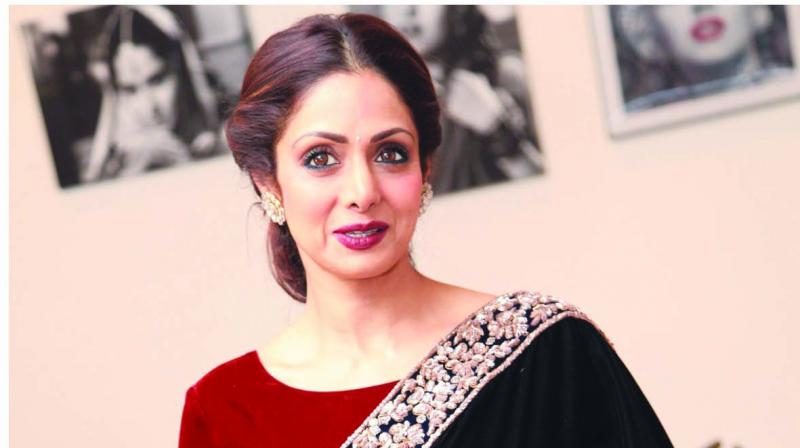 Bollywood superstar Sridevi had chosen to opt out of the frenetic circuit of movie stars soon after her mother passed on in 1996. The glamorous superstar got married, had two children — one of whom is an actor in her own right now. But then she had the gumption to do what no other actress has been able to do — make a comeback in lead roles, after an absence of 15 years, with two well-received films — English Vinglish and Mom.

Sridevi was a “wholesome” star in much the same way that Hema Malini is. Both transited from stardom into other interests and nurtured families. Patriarchal India likes its women to be family makers and Sridevi played that role perfectly. The sudden news of her demise late on Saturday was shocking, not least because it happened immediately after an over-the-top, big, fat Punjabi wedding of the Surinder Kapoor clan, in Dubai. Sridevi, at 54, had seemed the picture of elegance, beauty and wellness. To be snatched away so rudely by fate just seemed too unfair.

The suddenness of it all made the reservoirs of goodwill that her fans and the public at large had for Sridevi spill over. The social media was flooded with a sympathy wave for the woman who had it all, till life abruptly left her, without even time to say goodbye. Sridevi drowned in the bathtub of her hotel room in Dubai. Of course, we have all seen the warnings that a human being can even drown in a bucket of water, or even in mere inches of standing water, let alone a bathtub. At the Jumeriah Emirates Tower, the hotel where she was staying, the bathtubs look more like small pools.

Sridevi, the superstar, who struck fans dumb with her charisma and beauty in life and captivated audiences with her spirited acting on the screen, did not fail to enrapture a massive audience even in death. As befits an actor, Sridevi exited this world with a bang, ending a public life, which began in 1967, when she first acted in a Tamil film, at the age of four.

But this is also the time to introspect whether some amount of journalistic restraint would not have better served the occasion. This is far from even trying to suggest any kind of muzzling of the media’s (including visual media’s) freedom to report events as they happen. But surely a red line can be drawn between the casual airing of hurtfully, salacious opinions and the more deliberate sharing of verified, but inconvenient or unpalatable news?

The media can well take the view that it is its duty to report what is being said or even what is being rumoured. After all, they say, there’s never any smoke without fire! It may even be possible to seek technical refuge behind the argument that the media only reports what other celebrities say. But surely, some kind of editorial oversight should excise “news” that is no more than conjecture, and which may be hurtful to those, suffering from the trauma of a shock, till the facts emerge, which makes full disclosure overwhelmingly compelling. In the Sridevi saga, much of the visual media, and of course the social media, failed this smell test.

Luckily, the police, public prosecutor and other authorities in Dubai did its due diligence swiftly. This put paid to the conspiracy theories being spun at home. The Indian consulate in Dubai, as well as the embassy in the UAE, also appears to have played an exceptionally positive role in facilitating the speedy investigation of the case, which was closed without compromising due process.

Sridevi was an actor with a pan-Indian appeal. She had acted in Tamil, Telugu, Malayalam, English and Hindi films, and was married into a Punjabi family. Her fans are spread across the world. But, most important, she was also a modern, Indian woman — born in Sivakasi, Tamil Nadu, she achieved superstardom in Mumbai, which became her home. In 2013, the Government of India awarded her the prestigious Padma Shri, recognising thereby her talent and her achievements as an actor.

It is never easy to pin down the legacy of an actor. Many consider themselves to be nothing more than a lightning rod between the school of life and their audience, faithfully passing through experiences and emotions, as required by the script, that they are playing to. Here is how Sridevi, the empress of Bollywood during the 1980s and 1990s, described her role: “I had done my bit as an actor.” This was surely the understatement of the century — for someone who acted in 300 films over five decades.