S.M. Fasiullah
The writer is an independent researcher and translator of Urdu fiction. His latest publication is Curfew, a short story. He is working on a Unicef-sponsored project in Hyderabad.

Starting from the Northeastern state of Assam, the agitations and protests against the act united the aam aadmi and brought them on the roads. 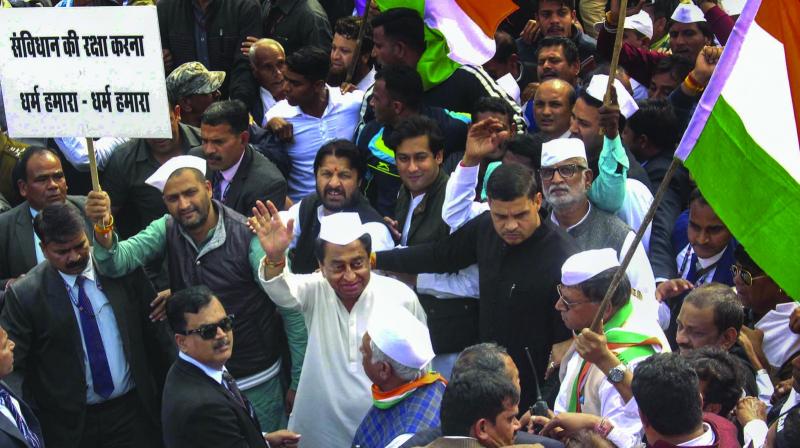 As the attacks continue to suppress the protests, the fire flares up further, engulfing more campuses and streets across the country. (Photo: PTI)

India is a country of young blood and brains. It witnessed a long-fought revolution less than a century ago. Indians who are in their 70s and above may remember three distinct features of the revolution: the tyranny of rulers, the non-violence of Mahatma Gandhi and the force of youngsters. Nationwide protests that rocked the country after the passing of the Citizenship Amendment Act (CAA) recently remind us of the Gandhi-led revolution against the British.

Starting from the Northeastern state of Assam, the agitations and protests against the act united the aam aadmi and brought them on the roads. The attack on students in Jamia Millia Islamia and vandalising of public and private properties added fuel to the fire. As the attacks continue to suppress the protests, the fire flares up further, engulfing more campuses and streets across the country.

Why so much public rage? Is it merely against the CAA? Who is fuelling the fire? And why does the administration seem unsuccessful in dousing the fire? Many such questions pop up in our heads. To understand this, we need to look at the protesters and remember the Gandhi-led revolution.

Today’s India is a 130-crore big union of states. It is beautifully diverse in many respects. Above all, its majority is comprised of young Indians! Three things are essential for this country of youngsters: a life with dignity, education and economic opportunity. The rage being displayed today is an outcome of the denial of these three things. Gandhi led the tough fight against tyrannical British rule for Swaraj to reclaim the due respect and dignity of each Indian and ensure the fair distribution of wealth and peace and security.

History is witness to many revolutions. Whenever the young population rises to give a fight, beware: they may not be tamed easily. A glimpse of it may be seen in JNU and HCU in 2016-18 and Jamia and AMU in 2019-20. Their resolve to achieve their goal is matchless. They strategise. They invent. They achieve. After all, they are sons and daughters of Mahatma Gandhi.

Look at the protesters in New Delhi. A chilly winter! Youngsters in New Delhi have come from various corners to register their protest at ITO in a chilly night. As against batons of the police, they used creativity in their response. Holding roses and reading the Preamble of the Constitution, they displayed Gandhigiri while chanting, “Dilli police baat karo, aao humare saath chalo, hum tumhare baat karenge, naki ghunsa laat karenge.”

These young Indians are faithful to the Constitution. They are fearless of the consequence of their fight for dignity and life. They are creative in their fight for rights and against divisive laws and repression. Neither did Gandhi gave up his fight against tyranny, nor his fellow young Indians will do against an unjust CAA and the repression. They are the torchbearers of the nation. It’s unwise to ignore them. Bring them into confidence before it’s too late!