‘India can be argumentative but not intolerant...’

Demonetisation has immobilised a large amount of cash, a part of which was black money on which no tax was being paid, says Pranab. 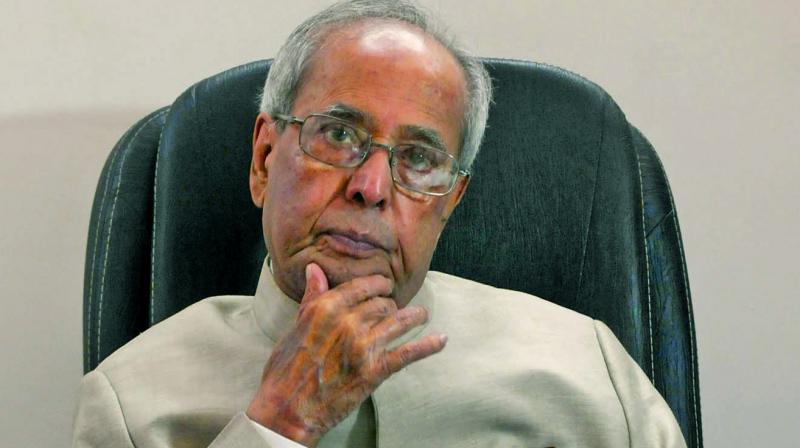 Pranab Mukherjee’s journey from being a lecturer to the President of India has indeed been a long one. He has emerged unscathed and remains giant in Indian politics. In an interview to Sanjay Basak and Pawan S. Bali, Mr Mukherjee speaks about parliamentary democracy, the Congress, economy, intolerance and his long journey, which is far from over.

In your book, The Coalition Years:  1996 to 2012, you describe Parliament as “Gangotri”. Is “Gangotri” being polluted by disruptions? In the book you indicated that even Sonia Gandhi did not often agree with your views on the way the Opposition needs to function in Parliament by “conciliation and engagement”?
One of the finest principles of parliamentary democracy is that there should be conciliation and constant engagement. Parliamentary democracy is a fine administrative instrument and it can achieve success if there is a broad understanding amidst all participants. The majority party derives the right to rule and the Opposition has the responsibility to oppose and criticise, but finally takes part in the decision. Here I don’t find any scope of disruption. We were taught that three Ds were essential in parliamentary democracy — debate, dissension and decision.

But disruption continues.
In a lighter vein I used to say that the fourth D (disruption) is our invention and contribution to parliamentary democracy. This is not good. This “Gangotri” must be kept unpolluted. When she (Mrs Gandhi) was the Leader of the Opposition in the Lok Sabha and I and Dr Manmohan Singh were in the Rajya Sabha, we were given freedom to act according to the situation prevailing in the House. There could have been minor differences. But there was no major difference between the two of us.

In your book you speak of P.V. Narasimha Rao in glowing terms. Has he been given due credit by the Congress?
Rao remains the unsung hero in history. He was the architect of economic liberalisation in India, which was implemented by then finance minister Manmohan Singh. Without Prime Minister’s backing Dr Singh could not have implemented the reforms. When Dr Singh was appointed as the finance minister, he was appointed as a technocrat and not as a politician. It was Rao who backed Dr Singh to the hilt. Unfortunately, during his time he has not been fully appreciated and has not been given due credit that he deserved.

You speak of “ideological differences” between you and Dr Singh on economic policy…
Dr Singh was much more pro-liberalisation; he was the author of liberalisation in India. I had differences with him not on basic objectives and requirement of liberalisation, but I was conservative and wanted things to move gradually and progressively. Dr Singh, P. Chidambaram and Montek Singh Ahluwalia were much more aggressive in pursuing the policy of liberalisation.

GST was the brainchild of the Congress. Today, the GST is being demonised. What has gone wrong?
Nothing has gone wrong. In 2005, the then finance minister, Mr Chidambaram, first spoke about GST. Work has been going on since then. Perhaps the work would have been completed during my second tenure as FM as I introduced the relevant Constitutional Amendment Bill in the Lok Sabha in March 2011. But the bill could not be passed following the lack of consensus amongst political parties. Finally, in Prime Minister Narendra Modi’s tenure, the GST has been approved, rates have been finalised by council of ministers set under GST and series of laws have been passed.

Aadhaar has been your policy, taken up aggressively by the Modi government. Do you support the way Aadhaar is being linked to everything — from phone connections to death certificates?
Aadhaar is a number given to people of India and it is a unique identity number. Aadhaar may be used to identify the person concerned. How it is applied, which areas it should cover are decided by the government of the day.

You had been one of the leading finance ministers of the country. Where do you think this government is going wrong as far as economic slowdown is concerned?
There are many reasons for economic slowdown but basic fundamentals of the Indian economy are strong. We need not worry too much over the slow GDP. Of course the IMF has revised its earlier forecast and reduced India’s expected GDP growth both for 2017 and 2018. But I feel, the huge amount injected in building the infrastructure and for recapitalisation of public sector banks would provide necessary boost to the economy and sooner than later we will come back to the path of higher GDP growth.

As far as Pakistan is concerned, do you still feel that there’s still no need to “romanticise relations or indulge in any adventurism”?
This is my general philosophy about conducting foreign policy. Pakistan is our close neighbour. Before Independence we were one country. We have a lot of similarities. The basic problem of cross-border terrorism should be resolved by Pakistan. No civilised government can accept supporting terrorism as a part of state policy. Pakistan has suffered a lot from terror activities. International community has advised Pakistan not to support terrorism in any form. If Pakistan listens to it, a conducive environment will be created and composite dialogue between India and Pakistan, which is now under suspension, can be resolved.

Dr Singh has said that you were better qualified to be the PM and had every reason to be aggrieved.
Dr Singh is gentle, polite and has always been courteous to me. He was the right choice for the post of Prime Minister at that point of time (2004), when Mrs Gandhi refused to take up the post. He not only brought a huge change in the Indian economic scenario but also effectively led a coalition government for 10 years. After Independence he is the third Prime Minister to have served over one term. As for me, I am quite satisfied and content. I have always believed and said that I have received much more from this country and its people than what I have given to them.

In your book you speak of Nehru’s belief in strong cadre-based and inclusive organisation. Do you think the Congress has deviated from the path? Is that the reason for Congress’ rapidly shrinking base across the country?
The Congress is a national party and is 133-years-old. It has always set the national agenda. True the space for the Congress has shrunk but I believe this grand old party will recover its rightful place soon. In life there are ups and downs, same is the story with any organisation. People of this country do not repose their confidence in one party or one individual for eternity. With time and developing scenarios people change their views, which eventually get reflected in voting.

The rise of the BJP since 2014 has been phenomenal. Do you feel that this could bring an end to dominance of regional parties?
India has a multi-party parliamentary democratic system, where various political parties have not only existed but also worked and functioned in the broad framework of the Indian Constitution. This is why it is said that in India, ruling parties and Opposition parties are not singular number but in plural numbers. I feel that Indian ethos and political culture will encourage it to have different political parties.

In your book you say: “We derive strength from tolerance and our social harmony is the sublime coexistence of temple, mosque, church, gurdwara and synagogue.” Is intolerance growing in India?
Tolerance is essentially a virtue of Indians. Over the years India’s message to the world has been of unity, peace and non-violence. Sensitivity of Indian people is affected whenever there are acts of violence and intolerance. In short, India can be argumentative but not intolerant.

Our nationhood is based on our cultural identity, which celebrates diversity. Any distorted or limited use of nationalism is not desirable.

How would you describe secularism?
Secularism is not negation of religion. Secularism respects all religion and does not discriminate between them.

Do you still get angry? How would you describe your journey?
(Laughs) It is because you all indulge me, and my quick or short temper, whatever you say. I have no hesitation to express regret for my temper. In a debate I do reconcile and if necessary I do express my regret. I don’t stick to a position if it is wrong.

Your journey…
As Tagore had said: “Aamar poth cholatei ananda (My happiness lies in my journey).” My journey will continue as long as I live.