‘Govt has a total majority for passing bills, so Opposition voices are not heard’

The government has a total majority, so our voices are not really heard, even though several young MPs are raising their voices, says Vishnu Prasad. 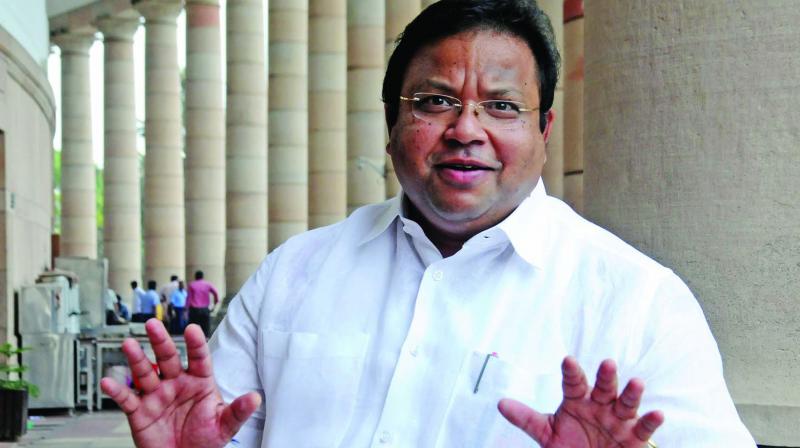 The Congress MP from the constituency of Arani, situated in Tiruvannamalai district of Tamil Nadu, M. K. Vishnu Prasad may be among the 300 first-time MPs who have been elected in the newly constituted 17th Lok Sabha. However, he has already cut his teeth in Tamil Nadu’s politics and is hopeful of his party’s long-term prospects in the state where the Congress has been in the wilderness for 50 years. In an interview with ANIMESH SINGH, Mr Prasad, who is a qualified doctor and a staunch loyalist of Rahul Gandhi (he flaunts a tattoo on his left forearm which reads “Rahulji”), spoke on a wide variety of subjects, from his experience in Parliament to how Mr Gandhi’s resignation could affect the morale of the party workers.

You are a first-time MP. How has been your experience in Parliament?
As members of the Opposition, we have to raise issues that the country is facing now as this government (NDA dispensation) is against democracy. They don’t believe in understanding people’s issues, and all the bills are being passed unheard.

Even if they (issues) are heard, they (the government) don’t give any relevant answers to them. As Congressmen, we stand and fight for the rights of the people. Whatever are the demands of the people, we have to raise them in Parliament.

We can only hope that this government listens to the voice of the people.

During parliamentary debates on various bills, members, especially those from the Opposition, give suggestions. Do you think the government inculcates many of these inputs while drafting legislation?
We give our suggestions, but for most of them there is no proper explanation, and certain other suggestions are not mentioned in the ministers’ reply. The government has a total majority, so our voices are not really heard, even though several young MPs are raising their voices.

We are doing our duty, but the government has to be patient and hear our voice.

The Congress-DMK alliance in Tamil Nadu has repeated its electoral performance of 2009 in the just concluded Lok Sabha elections by sweeping virtually all the seats barring one. Do you see the alliance continuing and performing well in the Assembly polls, whenever they are held?
Of course, there is no second opinion about it. Our alliance leader (DMK working president) M.K. Stalin is setting the feel for the state elections. We have cordial relations with them.

The Congress has been in the political wilderness in Tamil Nadu for almost 50 years now. With the alliance doing well in the Lok Sabha elections, do you see the party improving its prospects and reviving its fortunes in the state in the near future?
The Congress has a very bright future in Tamil Nadu. This is not a regular statement. It should be noted and recorded for future reference. Of course, every party faces ups and downs, and the Congress Party’s downward trend in the state has been there for almost 50 years. But off and on we have shown our real strength in tandem with the alliance.

With the help of alliance partners, the credibility of the Congress is increasing because people in Tamil Nadu believe in the secular fabric, and it is only the Congress Party which can uphold the principles of secularism in the country.

Our progress had been great during the UPA regime. The last five years have seen nothing, and the next five years will also see nothing. The people will teach them (the NDA) a lesson in the coming (Assembly) elections.

Do you see any difference in the perception of Rahul Gandhi as a leader among people in southern India as compared to the people in the northern part of the country?
In Tamil Nadu, Mr Stalin, our alliance leader, had categorically said prior to the Lok Sabha elections that the future Prime Minister of India is Mr Rahul Gandhi. And in our campaign as well, we projected him as the next prime ministerial candidate.

This message was effectively conveyed to the people in Tamil Nadu, because here the people are dead against Prime Minister Narendra Modi. The aversion against Mr Modi was very prominent during the Lok Sabha elections. We (the alliance) projected Mr Gandhi as the alternative prime ministerial candidate against him.

Probably in other states, this projection (of Mr Gandhi as prime ministerial candidate) could not be done effectively. If it had been conveyed in one voice that Mr Modi has to be replaced only by Mr Gandhi, then people would have believed us.

How do you see Mr Gandhi’s decision to resign as Congress president after the debacle in the Lok Sabha polls? Do you think it will create a political vacuum within the party?
Certainly it will have an impact. But we should respect his feelings. We all want him to be the president of the party as he is the binding force. All of us are not happy with the decision, but he will be there for us. The decision will have an impact everywhere.

Was it a hasty decision?
I don’t know about it. But he is the only person who we believe in and trust, and depend on as a leader. At the same time though, we hope that he will reconsider his decision. All of us spoke to him to recall it, but time is the best healer.

Could you, during the run-up to the elections, perceive that there was another Modi-wave coming?
The people have not recovered from the shock that Mr Modi has come back to power. Probably in numbers they are great, and in democracy only numbers matter.

Yet the people of India, by and large, are still wondering as to how did this happen, especially when so many promises were never fulfilled, and people feel cheated and disappointed.

This is the feedback we have received from people. They ask about what happened to those who ran away from the country with huge debts? Where is that `15 lakh which was promised to them? What was the benefit of demonetisation? Where are the jobs? Even in northern India, these are burning issues, but nobody knows how this (the NDA’s victory in the Lok Sabha elections) did happen.

You are a doctor by profession and recently participated in the discussion on the Dentist’s Amendment Bill, 2019. The government also plans to bring the National Medical Commission Bill to bring transparency in the medical profession as well as in its governance. How do you see this move?
I did not understand why the government brought the Indian Medical Council Amendment Bill when it already plans to bring the National Medical Council Bill?

The former was a piecemeal bill. For each and every thing they bring an ordinance. For initiating a small step, they promulgate an ordinance and then bring a bill when it lapses. These things can be done systematically and covered under one comprehensive bill.

Regarding transparency, the more the government is talking about it, doubts about whether it is actually there, are increasing manifold.

For example, in Arani, my constituency, under MGNREGA, money is now directly going to the beneficiary’s bank account. However, the issue here is that earlier the payment was being made directly in cash to people by the superviser after the work was completed. The payment was settled on a weekly basis.