‘With improved compliance, the GST’s implementation will streamline further’

the GST Council has taken over taxation issues to help the Niti Aayog, says NK Singh. 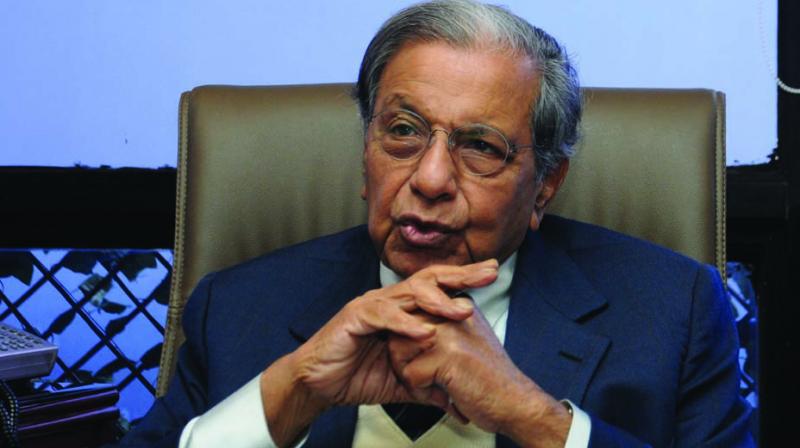 The chairman of the 15th Finance Commission, N.K. SINGH, in a conversation with Animesh Singh, expressed optimism that the GST system will evolve over time.

Despite the fact that the GST regime came into effect from July 1, 2017, several states have been complaining about not receiving compensation from the Centre after its implementation. What are your comments on the matter?
The issue of guaranteed 14 per cent compensation to states which covers two years of my tenure, is not in dispute. Some states have indeed raised the issue of money to be received from the GST’s implementation, but that the GST Council, which is a statutory body, has to look into. The compensation for the three balance years are not to be covered by us (15th Finance Commission) and therefore I am not in a position to conjecture on the future.

Do you think that the GST regime was implemented in haste?
With improved compliance, the GST’s implementation will streamline further. It has gone through its initial dynamic and evolving phase and needs to settle down. I feel that the GST Council did a great job by getting all the states on board (on building consensus over having a universal tax rate). In fact I would say that by doing so, India has a created a stellar record.

However, do you feel that the “one nation one tax” regime has not actually taken off?
But the point is that whatever rates have been fixed by the GST Council, have been uniformly applicable. Some items are still not part of the new regime, but these will evolve over time. All the products cannot be included at one go. It is not practical. The GST Council is seeking consensus over it.

How do you see the role of the GST Council?
It has turned out to be a powerful fiscal body completely harmonised in a short span of time. However it cannot be compared with the Finance Commission, as both are two standalone bodies and their functions are different.

Telangana chief minister K. Chandrashekhar Rao recently said that the Finance Commission should be a policymaking body. He was critical of its role by saying that even in its role of ensuring devolution of taxes, there is centralisation and this is blocking the development of newer states. Mr Rao accused the Finance Commission of having pre-conceived notions about states. What would you say on this as you are supposed to visit Telangana on February 18?
Our function is to look at the broad divisions between the Union and states. Secondly, among the states, we have to look at the revenue and fiscal positions of each one of them.

This commission is not visiting any state with any preconceived notions. We are meeting all stakeholders and asking them in what way the commission can assist.

What are your views on the consistent demand by Andhra Pradesh for seeking a special category status?
I was present in the Rajya Sabha when the Andhra Pradesh Reorganisation Bill was cleared in 2014. See, this issue is not in the purview of the Finance Commission or its terms of reference (TOR).

People know that the original idea of special status emanated from the National Development Council and not from any finance commisison. It was first given to Assam and then later to Himachal Pradesh and so on. It is completely an executive decision, and was not taken on the recommendation of any finance commission. So if in the future the commission’s TORs are amended by the President’s order asking us to look into the matter, then we would be in a position to look into it.

But since the Finance Commission visits all the states and has been to Andhra Pradesh and even Bihar, which too has been seeking special category status from time to time, can the body give any suggestions to the Centre on these persistent demands by states?
We on our own cannot suggest anything like this to the Centre. It would be extraordinary. They (Centre) would be aware of it, and if they feel they may do it.

Andhra Pradesh chief minister N. Chandrababu Naidu recently suggested that couples in the state in the age group of 25 years could have more than two children, as he feels that the state has for long been among the best performers in terms of curbing population. Yet he feels that Andhra Pradesh is being unjustly penalised for being the 10th-most populous state according to the 2011 Census figures, even though it has since been bifurcated and could lose out on the Finance Commission’s population-based dividends?
It’s not like that. Firstly, we are not the creators of our TORs, which say that population figures of 2011 are only to be used. Secondly, independent of this, one of the TORs is about incentivising states, and therefore we will ensure that success by any state in controlling demographic growth will be encouraged.

You were a member of the erstwhile Planning Commission, which has now evolved into the Niti Aayog. How do you see this transformation after four years of its existence?
The Niti Aayog has done a commendable job since its transformation from the Planning Commission, which was primarily a financial body. From that, it has now evolved into an intellectual think tank. It has taken some good initiatives in a short span of time.

But do you think it is a balanced body, as it has no financial powers?
This was what the whole break was all about. They (the Centre) did not want it to be a completely financial body and wanted to it be more like a think tank, with the finance ministry looking into the financial aspects. It (Niti Aayog) is a credible mechanism.

However, will you still call it an inter-state body?
Since it is not a financial body, therefore it cannot be judged with the Planning Commission. If you look at the council of Niti Aayog, all states are part of it and the Prime Minister continues to be its chairman, just like it was the case with Planning Commission. Moreover, the GST Council has taken over taxation issues to help the Niti Aayog.