Economy takes a hit if faith in the paper we called currency is shaken: Arvind Mayaram

In India, 70-80 per cent of the cash economy is legitimate, says Arvind Mayaram 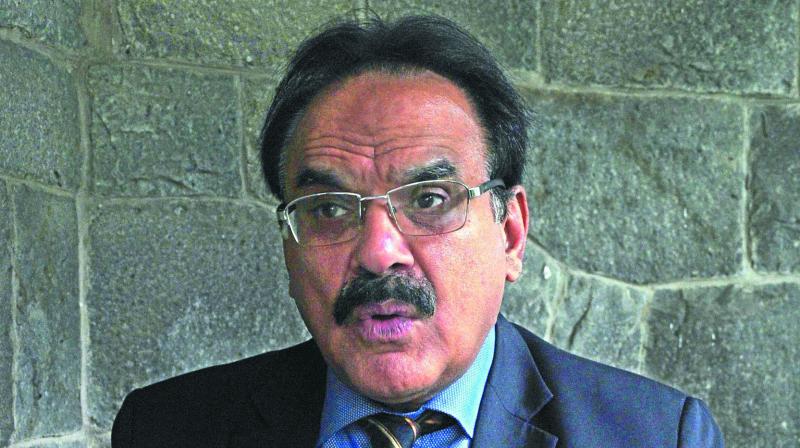 Arvind Mayaram played an important role in shaping the economic policies of the country during the UPA-II government as finance as well as the economic affairs secretary. In an interview with Pawan Bali, Mr Mayaram talks about the impact of Narendra Modi government’s demonetisation of Rs 500 and Rs 1,000 currency notes on the economy and people.

When you were in office was there any proposal to demonetise currency notes?
Discussions on the issue have taken place often, including during the UPA government. There was a discussion that if we demonetise, perhaps black money could be curbed to an extent… this is something which all governments have considered in the past.

What was the reason that previous governments did not take the decision to demonetise currency notes?
The question is not why previous governments didn’t take the decision. The important question is what are the consequences of demonetisation. If you demonetise particular type of notes and you bring it back as new series, then it only impacts the stock of black money but doesn’t prevent black money from getting accumulated again. It is clear that if you abolish certain type of notes, it doesn’t take care of long-term problems of black money. And then the question arises, if that is so, what negative impacts will there be that you need to assess for the cost-benefit analysis?

According to you what are the negative effects of demonetisation of currency notes?
In India, 70-80 per cent of the cash economy is legitimate. Why I am saying this is because everyone here doesn’t have bank accounts, illiteracy is high, poverty is very high with almost 300 million people living below the poverty line.

Then you have people who have no access to banking services, there are many villages which are far away from banks though we are talking about business correspondents. But that doesn’t really work because it is not available offline. Not every village is online. People have to travel long distances to reach banks. So people keep a lot of cash for the rainy day or for personal savings.

The category of people who do so is very large. So do farmers, especially in states, which do not have good communication facilities. Then you have migrant labours, tribals and small business people like cobblers, tea-sellers and others.

International Monetary Fund (IMF) has indicated that if demonetisation is not handled carefully it could be disruptive.
Of course, if a large number of people are involved in cash economy they are all at a disadvantage. They will now have to fill forms, explain how they got cash, etc. So it is disruptive in that nature. Construction industry, steel industry and cement industry can get affected.

Do you think it will impact the GDP?
Yes, there will be a dip in consumption and GDP number will be affected adversely. But it will also create a huge amount of discontent. I would suggest that if it is not sensitively handled, you might run into large-scale political backlash from people who are going to feel the pain. It is a double-edged sword and I don’t know how it is going to play out on that account. But there is one more issue that you need to analyse.

Currency is basically the wealth of the sovereign in one manner as it explains the economic strength of a country. If you look at dollar, it is one of the most counterfeit currencies in the world and yet the dollar has never been demonetised. The pound and sterling has never been demonetised. What they are quoting is withdrawal of silver dollar of 1887 or late 19th century but that is not demonetisation which we are speaking of. None of the strong economic powers have done this because it shakes the confidence of people in the currency. Ultimately, the currency note is paper. Actually the value of Rs 1,000 note is Rs 5 if you take the cost of its making. It becomes Rs 1,000 because the RBI governor signs on it and says I promise to pay a sum of Rs 1,000 if you produce it. The credibility is there because everybody believes that when I will produce it I will get things or services worth Rs 1,000. Now we have said no, if you produce it I will only give Rs 1,000 if I am satisfied that you should get Rs 1,000. So you have questioned the credibility of the currency note. It will take a long time for people to have faith in the currency. You will see purchase of gold will increase and it will have to be imported.

Will the import of gold impact the balance of payment of the country?
All those current account deficits are likely to increase. My point is not in terms of money, my point is about faith in the currency. Faith in the paper we called currency, if that gets shaken then the economy takes a bad hit. Even if you issue a new note, people will say we don’t know whether next year it will be demonetised or a government will come and demonetise it. That fear in the credibility of note is a long-term damage.

Modi government has changed the rules for benami transactions and made stringent laws to tackle black money. Do you think it wants to send the message that it will make it difficult to have black money?
Earlier we had Prevention of Money Laundering Act. It was very stringent but it didn’t prevent black money. We had all these draconian acts in the past, but they didn’t prevent people from having black money. The reason is that the fundamental of black money is election funding.

Even today, a political party doesn’t file income tax returns. It doesn’t file the income-expenditure statement of party, what money it received, from whom it received. It only files statement of election expenditure. It can take as much cash as it likes without explaining why. Unless you reform the entire process of election funding, this is not going to change. The new currency will be accumulated and again used to pay for election expenses.

In your view will this impact terror funding?
In ’90s, terror financing was through smuggling, i.e. gold. This is because we had lot of restrictions on gold import. One of the reasons we removed curbs on gold import was because we didn’t want to push gold into the black market. We wanted it to come honestly because if you don’t produce gold and there is a demand for gold, it is then smuggled. So terror activities were funded through gold. Terrorist activity is not funded through counterfeiting currency alone. If you look at the fake currency which is circulating in the market, it is not very large. Second, if you are using counterfeit as a state policy to undermine the economy of another country, then you start producing almost identical notes. It is a misnomer to think that new currency will not be counterfeited. Any currency can be counterfeited. I don’t agree with the point that it will have any major impact on financing of terror.