‘There needs to be a movement to counter the Modi-Shah duo...’

The Sangh Parivar is vitiating the atmosphere, says D Raja. 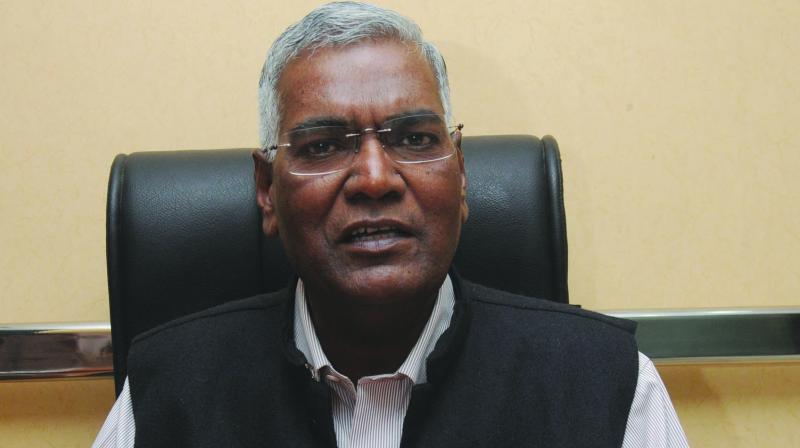 In an interview with Sreeparna Chakrabarty, CPI leader D. Raja says that the Sangh Parivar was vitiating the atmosphere and the Congress still remained the best ‘pan-India’ secular party to bet on.

What message is the Opposition trying to send by fielding its candidate in the presidential polls?
All parties are coming around to the view, or rather there is almost a consensus on the need to field a joint Opposition candidate for the presidential polls. I have met Congress president Sonia Gandhi. She is concerned with the current situation. The Sangh Parivar is vitiating the atmosphere. When I told her that there needs to be a broadest possible alliance, she agreed. She also agreed to my view that there needs to be a people’s movement to counter the Modi-Shah duo.

What kind of candidate are you looking at?
Such a candidate should have some public image. He should have wide acceptance and be a face people can trust. After all, it is not only to do with political arithmetic, but also to give people across the country the much-needed trust they are looking for.

Why have you asked the Congress to take the leadership in the issue? Are you okay with Rahul Gandhi being the leader of such an Opposition alliance?
All said and done, the Congress is a pan-Indian secular party. The regional parties have their own pulls and pressures. However, no leadership has been discussed as of now. We will talk about it only after the presidential polls. We are not discussing any political alliance as of now. As far as Mr Gandhi is concerned, the Opposition parties have to understand that times are changing. I don’t think blaming Mr Gandhi for everything makes sense.

Then what is your strategy?
At present, we are interested in a people’s movement. We have to resist the politics of the Sangh Parivar. As of now, this movement should not be linked to electoral politics.

Do you think the BJP will reach out to the Opposition for a consensus candidate for the post of President?
I don’t think so. This is the first opportunity the RSS has got to get its own candidate elected to the top constitutional position. They will not let go of it. That is why they are playing such kind of politics. They are fishing in troubled waters at many places.

Is this alliance going to turn into a national-level platform?
At the national level we are together. But there are many differences at the state level. For example, in Kerala, the Revolutionary Socialist Party and Forward Bloc are with the United Democratic Front alliance, while in West Bengal, they are on opposite sides.

How are you trying to forge this Opposition alliance into a broad-based forum?
We are using every opportunity available. For example, on May 1, we used the event of International Labour Day and veteran socialist leader Madhu Limaye’s birthday to bring all parties on a common platform. Next we are foraying into the South. DMK patriarch M. Karunanidhi’s birthday on June 3 will be the next big event when all secular parties will get together. His daughter Kanimozhi has already spoken with me over the phone and has met many leaders to invite them for the event.

What do you think is the relevance of the Left now? Do you think your space is being usurped by other secular parties?
The Left still has a lot of space. We are still big in at least three states. Also, there is a huge support in universities. More and more young people are becoming involved with our ideology. As far as other parties are concerned, you have to realise they have a limited regional appeal. But the Left has an international outlook.

What is the future of the Left movement?
We need to go back to the grassroots. We have decided to again begin a dialogue with the people to build an alternative narrative. We will also hold seminars and public meetings which will include the academia and thinkers. There is also a need to hit the streets with agitations against the current government.