Let the Opposition change tack and press for a debate on taking black money out of party funding and running election campaigns. 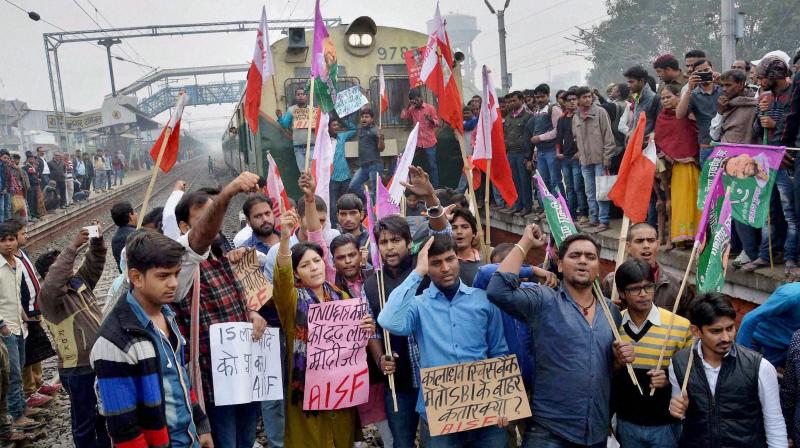 All India Students Federation and Chhtrara Janadhikar Party activists stop a train during the Bharat Bandh called by Left parties to protest against demonetization in Patna on Monday. (Photo: PTI)

The Opposition parties may themselves have come to the conclusion that their nationwide protest call on Monday served little purpose other than reinforce empty ritualism, that has emerged as the bane of our public life. The Left parties, mainly the CPI(M), were guilty of this more than the others by seeking a bandh or all-India shutdown.

Quite apart from the fact that this would have thrown ordinary people into a wore quandary than the one in which they already find themselves as they have to spend hours in bank queues due to demonetisation, the Leftists forgot they have little public support in the country at this time.

Who cares if they enforced a near-bandh in Kerala, where they run a government? That merely demonstrates that a bandh works only when you have power — government authority or people’s power. In Parliament, the protest against demonetisation, that is neither an anti-black money measure nor a welfare measure for the poor, has gone on for over a week. All the Opposition parties have wisely declared that while they support the eradication of black money and corrupt practices as laudable goals, demonetisation is not intended to meet those objectives, contrary to what the government claims.

The whole idea of first protesting in Parliament and then outside is misplaced. Remember, people have resilience and can take some hardship in their stride. Let the Opposition change tack and press for a debate on taking black money out of party funding and running election campaigns. That will be refreshing, and helpful too.