VAR, a contentious addition to soccer, will be in focus even more: a sign of desperation as the do-or-die aspect of sport creeps in. 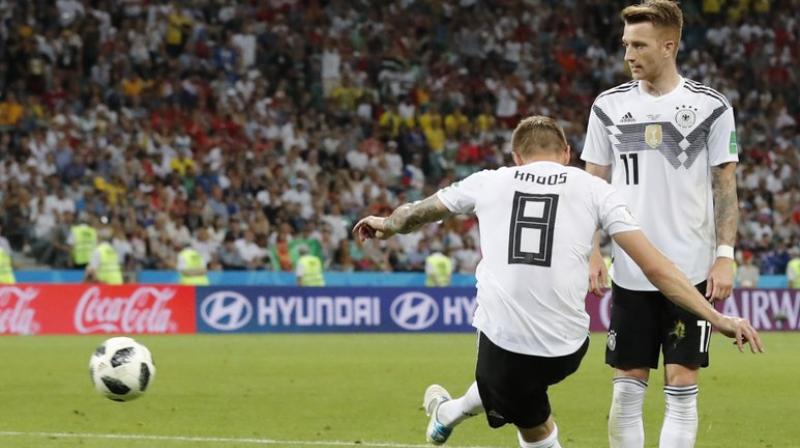 Germany’s Toni Kroos, left, scores his side’s second goal during the group F match between Germany and Sweden at the 2018 soccer World Cup in the Fisht Stadium in Sochi, Russia. (Photo: AP)

While 16 countries are the World Cup fray, defending champion Germany isn’t among them, having suffered the ignominy of not making the cut. They are in good company as the past four of five champions met a similar jinxed fate. This may have something to do with inability to sustain a winning combination over four years, while trying to blend in sufficient numbers of youth to make up for ageing legs among those who won the last Cup. But Die Mannschaft seemed particularly ineffective, unable even to take a decent shot at the South Korean goal despite knowing the guillotine was hanging over their heads. The consoling thought is the German system, perhaps the best in the world, may be intact to allow quick rebuilding.

This is the first World Cup since 1982 when not a single African nation will be among the last 16. The absence of an entire continent of talented footballers will be felt, though no one has yet challenged Europe and South America for soccer supremacy. The luck of the draw seems to have brought Brazil, France, Argentina, Belgium, Uruguay and Portugal in the same half, that too with France playing Argentina at the beginning of the Round of 16. Only one will survive to take on possibly Spain, Sweden, Croatia, Colombia or England. Japan are the only Asian team in this august company, but they really got there in farcical circumstances on the basis of the fair play criterion: they simply stopped tackling, so as not to be booked for foul. VAR, a contentious addition to soccer, will be in focus even more: a sign of desperation as the do-or-die aspect of sport creeps in.