Team India at its best

The team effort was greater than the sum of the individual performances, which essentially marks the greatness of this Indian Test team. 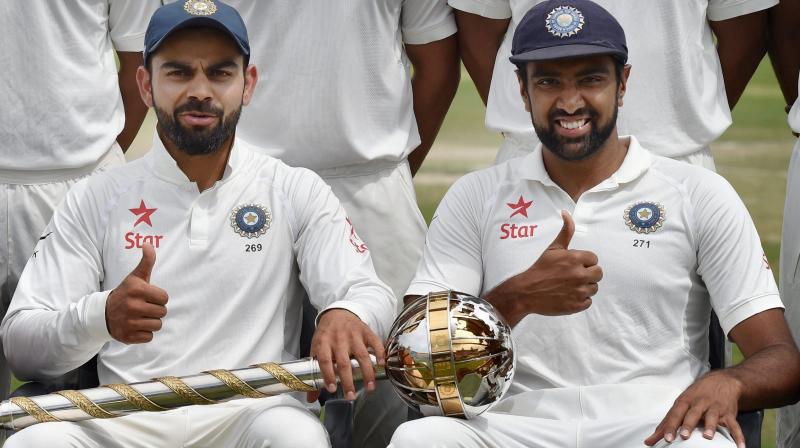 Indian skipper Virat Kohli and teammate R Ashwin pose with the trophy after winning the Test series against Australia at HPCA Stadium in Dharamsala. (Photo: AP)

Team India’s series victory over Australia came so decisively in the final Test that the Australians could have no complaints about being beaten by a better team. So intense was the battle that the series did little to ease tensions between the two sides, with India skipper Virat Kohli even saying the Aussies were no longer friends! That may be an exaggeration, for cricket also fancies itself as a catalyst for diplomacy. Of course, the Chinese may object to an Indian bowling the left-arm wrist spin called “Chinaman” to fox the Aussies at Dharamsala, the Dalai Lama’s adopted home. Intriguing as this would be, the choice of Kuldeep Yadav, who bowls the Chinaman and googly to great effect, was a stroke of genius by the selectors and coach Anil Kumble.

Team India can pat itself on the back for a thorough winning performance in Dharamsala, where the chances were equalised by a good surface. This world-beating Test side has won seven series in a row, and stays on top of the Test pyramid to reap a $1 million annual reward. The challenge from here will be to match the same teams overseas when their home conditions suit them more. While the spinners’ performances gave India the edge, the quick bowlers were not far behind and the batsmen down the order fought to get over Kohli’s rich vein of form in a 13-Test home season petering out against Australia. The team effort was greater than the sum of the individual performances, which essentially marks the greatness of this Indian Test team.