The 2+2 talks had the obvious context of the Chinese aggression in Ladakh, and this enabled both sides to orchestrate extreme camaraderie 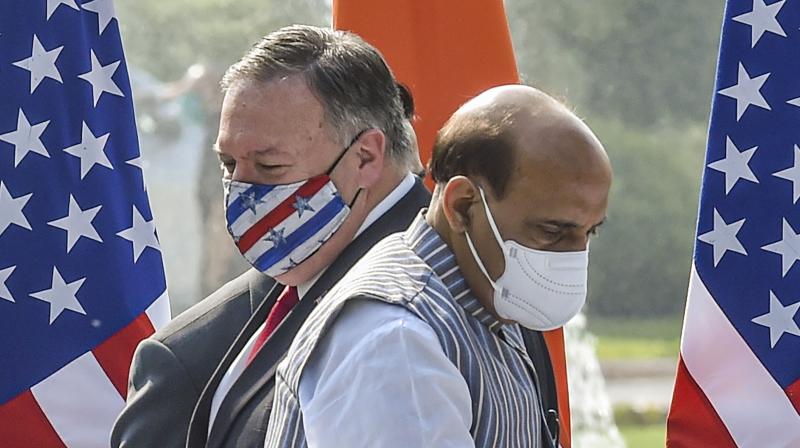 The third edition of the India-US dialogue in the “2+2” format — the annual event at which the foreign ministers and defence of the two countries take stock of the international security affairs — which was held in New Delhi last Tuesday had the obvious context of the Chinese aggression in Ladakh, and this enabled both sides to orchestrate extreme camaraderie.

Defence minister Rajnath Singh, in his opening remarks, spoke of China’s “reckless aggression”, perhaps implying that our northern neighbour’s military venture in eastern Ladakh was foredoomed. This is good for national morale, and apparently rests in no small measure on assurances of US support. As if to confirm this, US secretary of state Mike Pompeo, who likes to sound hawkish on China, noted in the joint press conference after the meeting that the US would do everything in support of India’s “sovereignty”.

This sounds a shade condescending, and may suggest to some that in the US reckoning India may not be altogether prepared to defend its borders entirely on its own. However, the current Indian leadership will just have to pocket the superciliousness. It has just finished signing — also on Tuesday — the Basic Cooperation and Exchange Agreement (Beca), the last of the four “foundational agreements” on which the US insists when it enters into a deep partnership with a country involving close defence relationship. The external affairs minister, S. Jaishankar, pithily summed up the discussions when he informed the media that the conversations had a strong “political military” content.

An assertion of such a nature is unlikely to be tested in the severest of conditions any time soon in the event that the China’s “People’s Liberation Army” (threatening currently to ‘liberate’ Ladakh without solicitation) changes its mind in view of the growing international hostility it may sense to its militaristic designs over a large swathe of continental and maritime territory. But India will do well not to overlook history, although contexts may change from era to era. In 1962, Prime Minister Nehru had specifically sought “air support” from the Kennedy administration to ward off Chinese aggression in our northeast, but this was denied although Washington did extend support in other ways.

When President Donald Trump paid an official visit in February this year, India and the US had escalated their relationship to that of Comprehensive Global Strategic Partnership, the closest India can think of getting to “strategic ally” (of the Nato variety) in the age of multi-polarity, and in the just ended “2+2” conversation, it was decided, according to the joint statement that was issued, to expand this framework in order “to realise the full potential” of the Comprehensive Global Strategic Partnership. Perhaps it is a foregone conclusion that greater purchase of American military platforms and equipments will ensue and greater clarity lent to the “shared vision” of India and the US for the Indo-Pacific which was first introduced into the India-US relationship during the visit of President Barack Obama in PM Narendra Modi’s first term.