The business of propaganda and image making has for now concluded. 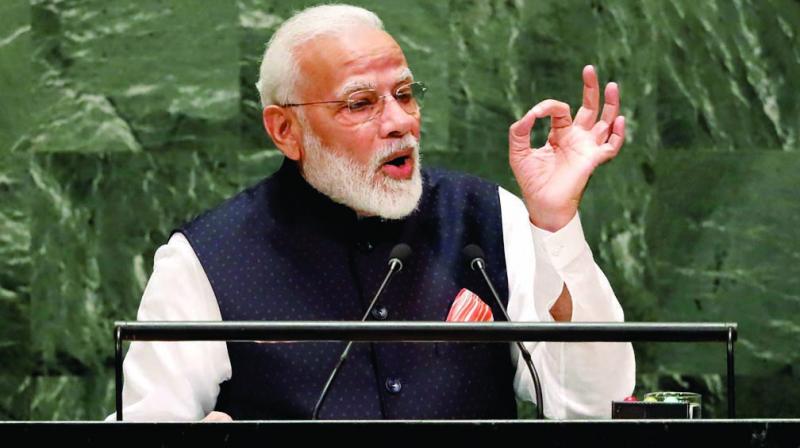 Prime Minister Narendra Modi’s crowded week-long sojourn in the United States commenced with the “Howdy, Modi” event in Houston last Sunday, a function of thousands of American voters of Indian background — arranged by Hindutva groups aided by the Indian embassy in Washington — in which Mr Modi and US president Donald Trump were feted.

The media here greatly relished the very high-profile feel-good show as it helped its general agenda to lionise the PM. It blocked out coverage of the thousands protesting the government's domestic performance just outside the venue, and we would not have known of this but for the CNN coverage.

The PM’s 17-minute address to the UN General Assembly on Friday, the last significant event in the PM’s calendar, turned out to be the familiar rendition before the world body of the litany of the Modi government’s programmes, as at an election rally.

This was the taking of the “high road” as it included references to the climate and environmental policies, besides urging on the world that terrorism is its real scourge. This had been decided in advance so that it would contrast with the hollering Pakistan leader Imran Khan was expected to do in his UNGA address. (Mr Khan did not disappoint, making blood-curdling references to India in the context of Kashmir, besides warning of a nuclear conflagration).

The business of propaganda and image making has for now concluded. However, the feel-good of Houston now seems a long time ago. Sobering developments such as Kashmir and stalling trade talks have intervened, neither of which drew much satisfaction for India.

The trade talks appear to have struggled, but commerce minister Piyush Goyal will probably hang back in America a little longer, hoping to emerge with a trade package of a viable kind to show back home even if a larger trade compact appears on the horizon only later, if at all. The US usually asks for the impossible in such negotiations and these things take time. So, that’s on the watch list really.

The context of Kashmir was not a feel-good quantity at all in the US. Separately, through a White House readout of the 40-minute Trump-Modi meeting on the sidelines of the UNGA mid-week, which focused on trade and terrorism, and last Friday through a statement of a senior State Department official, Washington has virtually handed India a to-do list. This is likely to please Pakistan and the people of Kashmir who, early indications suggest, were happy that Mr Khan raised their plight at the world forum.

Demands by the US as regards Kashmir include the lifting of day-to-day restrictions on people’s lives, freeing thousands of detained persons, including the entire political community, and holding an early Assembly election, besides bringing economic development, the formal justification for ending Kashmir’s extant constitutional status. None of this is an easy ask. Officially, the State Department has spoken of the use of US mediation on Kashmir. Political troubles may lie ahead.