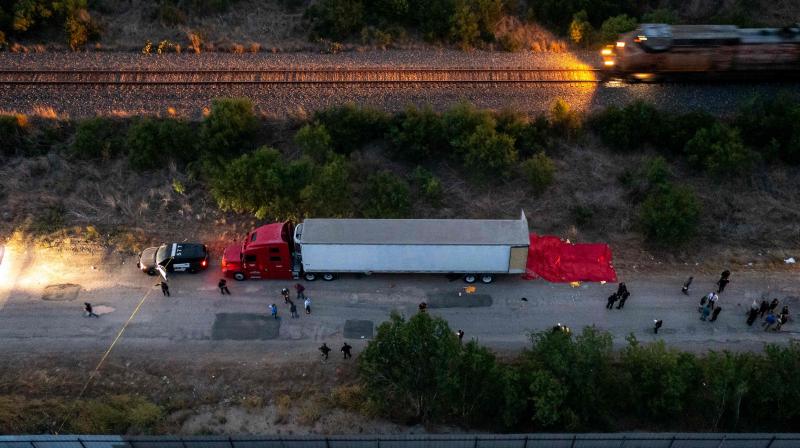 Members of law enforcement investigate a tractor trailer on June 27, 2022 in San Antonio, Texas. According to reports, at least 46 people, who are believed migrant workers from Mexico, were found dead in an abandoned tractor trailer. Over a dozen victims were found alive, suffering from heat stroke and taken to local hospitals. (AFP)

The gruesome end that at least 51 illegal migrants met with in super-hot conditions inside a packed trailer on a secluded road near San Antonio, Texas came in one of the biggest tragedies to strike criminal human trafficking near the US-Mexico border. A group of dehydrated Mexicans, Hondurans and Guatemalans was stricken by the inhuman conditions in which they made the crossing. It is a microcosm of the world’s problem of the yawning gulf between the rich and the poor, which some of those on the wrong side of the divide try to cross by becoming illegal economic migrants, or asylum-seekers fleeing criminal gangs that operate in Central America.

The humanitarian issue of economic migrants looking for a way out of dire poverty, violence and degradation of society in their homeland has proved a particularly difficult one to handle for the Democratic President Joe Biden. He may have tried to reverse some of the hardline immigration policies of his predecessor Donald Trump and he is being blamed for it as his more empathetic approach to people crossing the border is being pointed out as the reason so many are now trying to get into the United States.

In just the month of May, US immigration and border patrols, on which billions of dollars are spent annually, stopped as many as 2.5 lakh illegal migrants attempting to cross over.  There is no knowing how many managed to snuck in to stay undetected while working menial jobs to keep body and soul together. Mr Biden may wish to get rid of the “Remain in Mexico” policy that Trump brought in to control the migrants as they waited to clear the legal immigration process. But the issue is up before the conservative-majority Supreme Court and it needs no second guess on what the outcome may be.

It may sound outlandish but the US is also being accused of racism in immigration as it fast-tracked around 3,000 Ukrainians fleeing the war. Can the more economically sound countries be expected to open up their borders to migration without affecting their demographics or serving to protect the interests of their own people first? People running in desperation from poverty suffer from a global evil which the world would like to alleviate but cannot and must suffer for it.