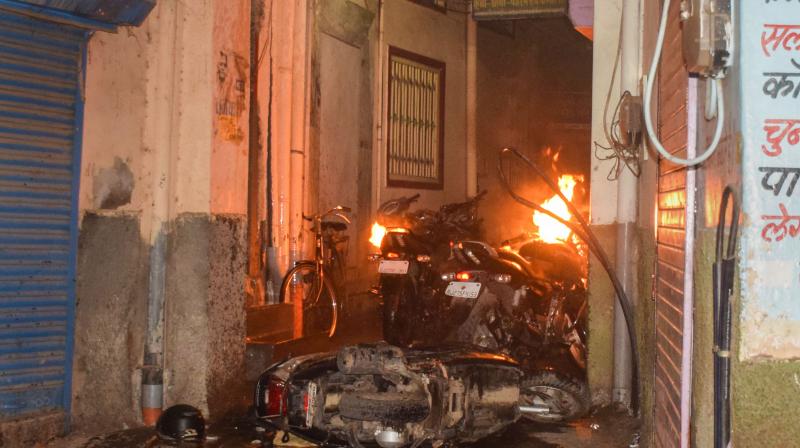 Vehicles lie in an alley after an incident of arson following the murder of a tailor by two men allegedly over his social media posts, in Udaipur, Tuesday evening, June 29, 2022. (PTI)

The bloodcurdling images of two terrorists beheading a fellow human being in Udaipur to avenge what they felt was an insult to their religion place on each of the citizens of this country a responsibility. A failure at meeting it could send our nation down an inescapable abyss.
The Rajasthan police have arrested the duo and the National Investigation Agency has taken over the probe into the case. It has already been reported that the criminal gang had connections with Islamist and pan-Islamic groups in Pakistan and had been self-indoctrinated. The agency must get to the roots of the conspiracy and identify the original plotters and their mentors within and outside the Indian border.

It must also look for such potential modules which are into indoctrinating people and planning such excesses under one pretext or the other. The agency must ensure that those terrorists and their handlers encounter the harshest face of the law and the ends of justice are met. The agency, at the same time, must take care that innocent people should not be harassed just because they shared the religious beliefs of the terrorists.

The Rajasthan government has already imposed a curfew in the whole state to prevent violent protests against the murder. While the government will, hopefully, use every trick in the rulebook to ensure that protests do not lead to violence, there is only so much that they can do if people opt for the path of hatred and vengeance.

It is the job of the political parties and social and community organisations to drive into the minds of the people the reality that violence begets violence and that the way forward for a multicultural society such as ours is strict adherence to the rule of law.

The governments at the Centre and in all the states must take on themselves the responsibility of preventing incidents that could trigger bloodshed. Every loss of life is a loss to the nation.

The believers of Islam can complain that their religious feelings were hurt by the words of BJP spokespersons. The police have booked them; the party has also acted against them. There are believers who insist that their belief is so strong that they do not feel like hitting the streets or taking the resort of violence. Such sane souls are in the majority in every religion in this country and they must stand together.

This nation and its ancient civilisation have nurtured every shade of belief, and tolerance to diverging ideas has been the cornerstone of it all. The Constitution of India ensures that everybody has the right to freedom of conscience. This nation also belongs to people who have no faith at all. And the law mandates that none should impose upon the belief of the other.

There is legal remedy available if one feels that the acts of someone else are hurtful. Those who believe that they must force their writ on others have no place in a secular democracy. If they don’t understand it themselves, then the law must make them understand it.