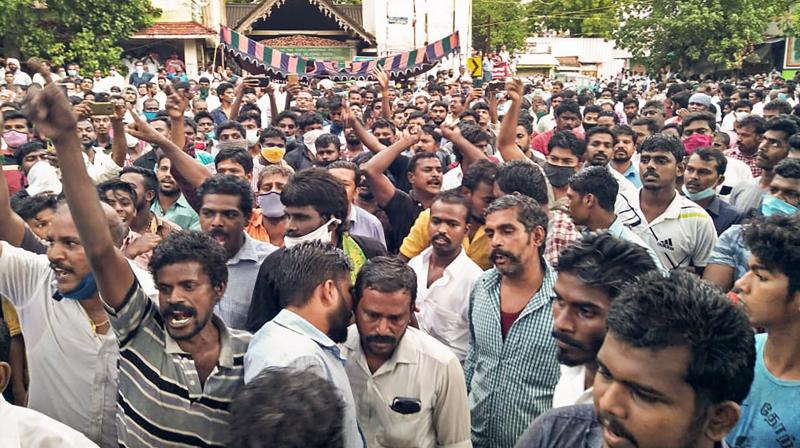 Villagers stage a protest in solidarity with custodial death victims, at Sathankulam in Tuticorin district, Sunday, June 28, 2020. P Jeyaraj (59) and his son Fennix (31), died at police custody on June 23 with relatives alleging that they were severely thrashed at the Sathankulam police station. PTI Photo

Outrage has been mounting over the deaths in custody of a father and son in what is fast proving to be India’s George Floyd moment. The outcry over police brutality in its vilest form in Tamil Nadu’s hinterland in the deep south is snowballing into a campaign for justice.

Even days after the deaths occurred in Sathankulam near the harbour town of Thoothukudi, the police officials, thought to be responsible, only remain suspended, that too after they had first been merely transferred. Such suspension is just departmental action and nowhere near equivalent to dealing appropriately with grave incidents.

News erupted on Sunday of the death of an auto-rickshaw driver in neighbouring Tirunelveli district in similar circumstances even as a video-graphed post-mortem and inquiries were being initiated into police action in dealing with what was a minor lockdown disciplinary issue in Jayaraj’s son Emmanuel Bennix keeping his mobile phone shop open beyond the permitted hours in the time of the pandemic.

The government of Tamil Nadu has failed to grasp the enormity of torture and third degree methods used liberally within the precincts of its police stations.

It is almost routine that no appropriate action is contemplated until word comes from higher judiciary. This is a reflection of callous disregard in the southern state for standard protocols as stated in the guidelines and police manuals with regard to arrests and interrogation of law breakers.

In the absence of prompt executive action like booking cases against policemen and lower judicial officers — who allow the police too much latitude without applying their minds to the need for judicial custody — it is a virtual police state that is in operation.

Tamil Nadu also has the dubious distinction of having topped the southern states with 76 police custody deaths in 2018.

The timber trader Jayaraj and his son Bennix were detained by the police on June 19 and they died on June 22 and all we have had subsequently is vacillation on the party of the state leadership of the same kind as was evident in the shocking police firing incident in Thoothukudi that snuffed out the lives of 13 persons protesting against the Sterlite copper factory on May 22, 2018.

A week after custody deaths, none of the persons responsible has been booked for murder, which is to be considered the minimum action to be expected when the horrors of police brutality are out in the public domain as the social media reverberates with indignation.

Why is justice so slow even in investigative action being initiated in a country notorious for unhurried and slovenly methods of calling out police excesses is a question that has never been answered satisfactorily.

It is clear that police personnel at the lowest level are least educated in matters of human rights and have little understanding of protocols in humanely dealing even with criminal elements.

The rot in the police forces needs to be gouged out if we are to lay any claim to being a civilised society in which the custodians of the laws must act in equitable manner.