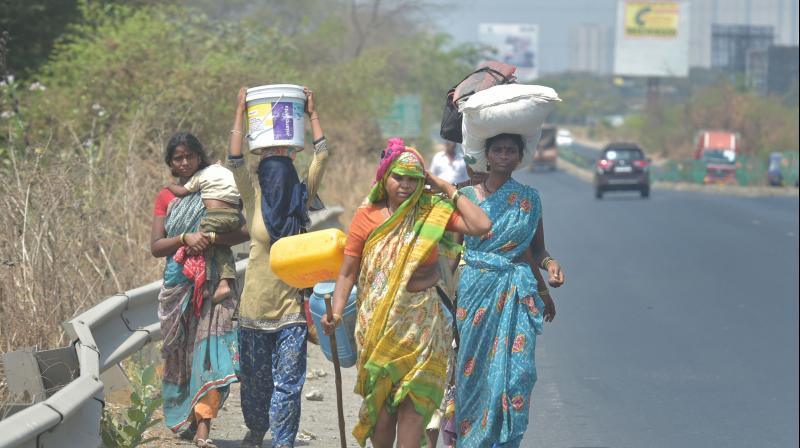 Migrant workers from Akola district of Maharashtra walk along Mumbai-Nashik highway to reach their native places, during a nationwide lockdown in the wake of coronavirus, in Thane. PTI Photo

Governments all over the world now face a dilemma: to lift the lockdown and open the economy, or not. And the stakes are high. To open means allowing people, the most vulnerable of them all, to encounter a novel virus which is out to kill. To continue with the lockdown means to expose them to one of the oldest enemies of human species with a fatal hold on its history: hunger. It’s heads we lose and tails they win for the marginalised, poor and migrant labour. As French academic-economist Thomas Piketty points out, “What we see with this crisis is in many ways the violence of inequality.” India, a democracy with a widening chasm between the haves and have-nots, would find it increasingly difficult to reconcile the various conflicting interests of its stakeholders. It would call for statesmanship of the highest order to present a proposal, which can address the needs of the most number of people while jeopardising the interests of the least number of them. Any attempt to thinking of the life after lockdown must factor in this hard reality. Prime Minister Narendra Modi’s videoconferencing with state chief ministers on Monday appears to throw some light into the thinking of the government.

It is understood that the Prime Minister has expressed his inclination towards letting states decide the minute details of implementing the lockdown policies in various regions. This is a welcome step, as it will allow the Union government to take over the role of policymaker and enabler and the states the frontline foot soldiers. Given our constitutional scheme, the states have a major say in most subjects that come into play while fighting coronavirus — health, law and order, civil supplies, local self-government and agriculture. Micromanaging the lockdown at the village and block levels by the Union government would prove counterproductive even while striking at the roots of the federal nature of the constitution. The state governments are best placed to balance the varied demands of the people and come up with solid plans to take the country back to life that cannot brook further delay. The Union government can come up plans such as reverse quarantine to protect the more vulnerable segments of the population and letting the workforce go back to work meeting prudent social distancing and personal hygiene norms. While granting more power to the states is welcome, the Prime Minister’s continued silence on the states’ demands for more funds is worrisome. The chief ministers have raised the issue in all three videoconferences they have had with Mr Modi after he announced national lockdown on March 24. This assumes urgency due to the fact that migrant workers who fuelled growth engines in the metropolitan cities now feel cheated after being rendered jobless, homeless and penniless. They will be the worst victims of the violence of inequality, and hence must be immediately attended to. Lifting of lockdown would mean heightened vigil and efforts to upgrade medical infrastructure. The Union government, which seems to appreciate the states’ demand for more freedom on the ground, must concede the demand for enhanced devolution of funds, too, and play the role of a true enabler.