Is Constitution ‘anti-Hindu’ or the RSS anti-Indian?

The RSS has now chosen to speak through its outfit, the Vishwa Hindu Parishad. 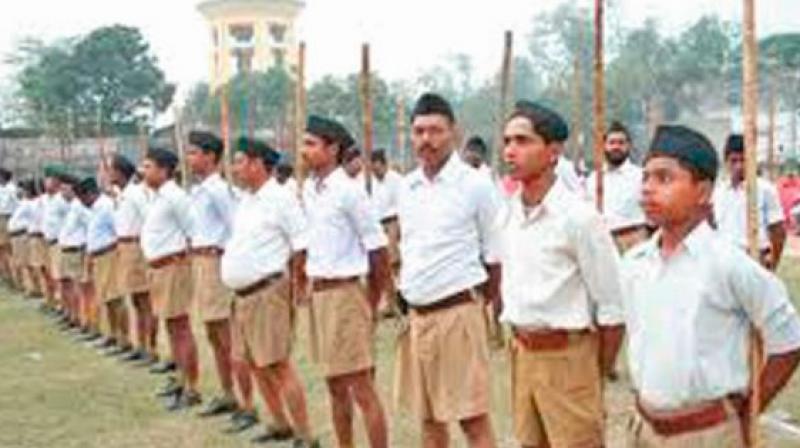 The real nature of the BJP and its creator the RSS is missed by many — including some who ought to know better. (Photo: PTI)

When a major political party or organisation rejects the constitution of its country, there are grave implications for the country’s governance and its democratic system. The Rashtriya Swayamsevak Sangh, whose political wing, the Bharatiya Janata Party, is in power at the centre and in many states, never made any secret of its rejection of the constitution of India. Beneath this rejection lies its more openly avowed rejection of India’s democratic governance and its national ethos.

The RSS has now chosen to speak through its outfit, the Vishwa Hindu Parishad. A few days ago, the VHP’s “national working president” Alok Kumar inaugurated a conference that demanded amendments to the constitution of India to prevent “organised conversions” because, in its opinion, they marked a “subversion” of the religious character of Indian society and civilisation.

This is a swipe at India’s constitution, which recognises India as a secular state and guarantees the fundamental right to propagate religion (Article 25). The RSS’ agenda is far wider. It rejects the national flag, the tricolour, and flouts its saffron flag called the Bhagwa Dhwaj, which is styled as the Guru (mentor).

Donations are made to this “guru” with beneficial results before the tax authorities. It is regarded as the symbol of “nationalism” — ie Hindu, not Indian, nationalism. Rejection of India’s constitution is implicit in the RSS position on the national flag.

On Jan 1, 1993, the RSS published a white paper denouncing the constitution as “anti-Hindu” and outlining the kind of polity it wishes to establish in the country. In its foreword, Swami Hiranand wrote: “The constitution is contrary to the country’s culture, character, circumstances, situation, etc. It is foreign-oriented.”

He added: “We will have to think afresh about our economic policy, judicial and administrative structure and other national institutions only after nullifying the present constitution.” It had to be discarded completely.

“The damage done by 200 years long rule of the British is negligible as compared to the harm done by our constitution. The conspiracy to convert Bharat into India continues.” He lamented that “we are known as Indians the world over” and reminded the reader that “the freedom struggle was fought in the name of Hinduism. Vande Mataram was our national song… in post-Independence India, Hindustan and Vande Mataram have been exterminated”.

It was a calculated move. On Dec 25, 1992, soon after the demolition of the Babri Masjid, its author Swami Muktanand held a press conference in New Delhi to give a call to the nation to reject the “anti-Hindu constitution”. He said: “We have no faith in the country’s laws” and “the sadhus are above the law of the land”. Also, India’s citizenship law, which deems all born in India as natural citizens, was called “humbug”.

In January 1993, the then de facto RSS supremo, Rajendra Singh, said: “Certain specialties of this country should be reflected in the constitution. In place of ‘India that is Bharat’, we should have said ‘Bharat that is Hindustan’. Official documents refer to the ‘composite culture’, but ours is certainly not a composite culture. … All this shows that changes are needed in the constitution. A constitution more suited to the ethos and genius of this country should be adopted in the future.”

On Jan 24, 1993, M.M. Joshi, then BJP president, reiterated the demand for a fresh look at the constitution. The pamphlet complained: “Westernised people unfamiliar with the culture and history of India are the creators of our constitution.”

It condemned reservations for the scheduled castes, scheduled tribes and backward classes. The minorities fared worse. The constitution was denounced in intemperate language. “This constitution can be called a pile of garbage … the constitution of India is an enemy of the nation’s unity and integrity.”

Amazingly, the VHP staked a claim to a “general” consultative status to the United Nations’ Economic and Social Council. The South Asia Human Rights Documentation Centre of New Delhi, which enjoys that status, filed a devastating briefing note refuting the VHP’s claim.

The real nature of the BJP and its creator the RSS is missed by many — including some who ought to know better. They regard them as India’s conservative parties. The RSS’ affiliate publication Organiser, in its Sept 22 issue, had an article on German ambassador to India Walter J. Lindner’s visit to the RSS’ headquarters at Nagpur with colour photos of him paying obeisance at the feet of the statue of its founder, K.B. Hedgewar, and register his respectful attendance on its chief, Mohan Bhagwat. He could not be ignorant of the RSS’ record on spreading hate and recourse to violence. He simply wants to succeed in his job.