AA Edit | Azad ditches Congress in its hour of crisis

His Jammu speech was regarded as opportunistic and aimed to benefit BJP, confirming doubts of many that it was a payback 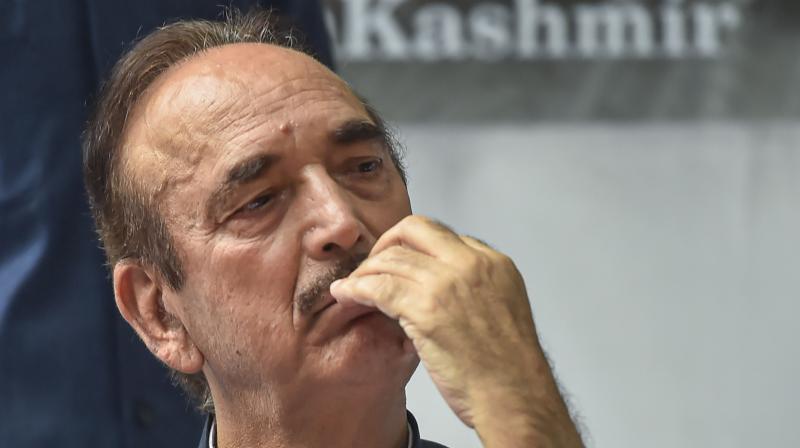 Azad’s public remarks elsewhere were shot through with a factional spirit and aimed at denigrating the Congress and its senior leadership. In J&K, the speculation then was that he would either start his own regional outfit or in some manner provide comfort to BJP in crunch situations. — PTI File Image

The resignation of senior Congress leader and initiator of G-23, the party’s vociferous ginger group, Ghulam Nabi Azad, from the basic membership of his party on Friday, registers a long-anticipated formality. After Mr Azad retired as the Leader of the Opposition in the Rajya Sabha in February last year, and was not re-nominated to the Upper House by his party, the leader from the Jammu region went on an aggressive and virtually anti-Congress campaign in some parts of Jammu as well as the Kashmir valley.

His Jammu speech was regarded in political circles as opportunistic, and aimed to benefit BJP, confirming doubts of many that it was a payback. Days before, in a moment of high drama, Prime Minister Narendra Modi, in an address to bid farewell to retiring Rajya Sabha members, had dramatically choked up when he mentioned the leader of the Congress, a party for which he has shown nothing but unsheathed hostility.

Mr Azad’s public remarks elsewhere were shot through with a factional spirit and aimed at denigrating the Congress and its senior leadership. In J&K, the speculation then was that he would either start his own regional outfit or in some manner provide comfort to BJP in crunch situations. There are indications from the senior leader himself that a new party may be in the offing.

The burden of the former Congressman’s song in the five-page long letter of resignation written to his party chief, Sonia Gandhi, who is abroad for medical treatment, is an almost violent verbal broadside against Rahul Gandhi, who had resigned as Congress president more than three years ago and refused to relent to take back his resignation. This can hardly resound to the credit of a senior figure, especially one who has chosen to leave his party in a time of difficulty although the party had showered him with attention right through his public life.

This is not the occasion to delve deep into the causes of the steep decline in the political fortunes of the Congress party, especially in the past decade. It is also quite clear that the slide owes not a little to leadership and organisational deficits that Mr Azad has sought to emphasise. Nevertheless, someone of his broad experience in political life was expected to know instinctively that organisational shortcomings were indeed magnified by default at a time in which identity politics of one kind or another has held sway.

This accentuated tendency is the result of  socioeconomic, technological, and other structural changes — some of which threaten to disrupt social cohesion and the nation’s unity — that have dominated public life for a considerable period. Such has been the grip of this brand of politics that all parties — not just Congress — that espouse politics based on inter-community cohesion and harmony have suffered. That of course is no reason for the Congress to delay organisational elections, and focus on electing a non-Gandhi as its president in order to get out of a prolonged leadership crisis.

Mysteriously, Mr Azad has walked away at a time when in fact the process to elect a new Congress chief is under way with the poll slated for Oct. 17 and the result to be declared on Oct. 19. This in fact was a key G-23 demand. So, what is the former Congressman aiming for exactly? Why did he choose not to be in the contest for the new leader? Mr Azad is a former J&K chief minister and is held in esteem in the UT.

That makes people there wonder all the more why he has not taken a broader view. Why has he resigned when the first Assembly election after the disruption of J&K’s special status may be round the corner? Mr Azad could have done better for himself, for his former party, and for Kashmir.