It’s beyond comprehension why the government or the law minister would tinker with a basic law when Islam is Pakistan’s state religion. 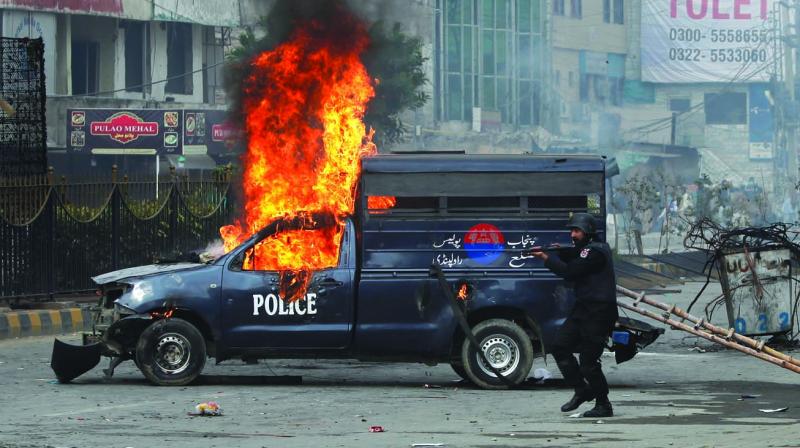 A Pakistani police officer aims his gun towards the protesters next to a burning police vehicle during a clash in Islamabad. (Photo: AP)

The Pakistan government had to call in the Army to quell the Islamabad blockade as the police clashed with Islamist hardliners. This happened ironically just before November 26, when India mourned the victims of the 26/11 carnage nine years ago. It is risible, of course, that official Pakistan blames India for events in its capital as supporters of the fledgling Tehreek-e-Labaik Pakistan erupted, accusing the law minister of blasphemy against Islam. The issue arose from a missing clause in the election law that threatened to bring about a fundamental shift in the Islamic belief in the “Khatm-i-Nabuwwat”, or finality of Prophet Muhammad, in an oath. A cornered government blamed it on a clerical error, but that convinced no one, least of all Opposition leader Imran Khan, who blamed an “incompetent and dithering” administration.

As protests spread to other big cities, the administration had to ease its crackdown on followers of one of two ultra-religious Islamist political movements of recent vintage. It’s beyond comprehension why the government or the law minister would tinker with a basic law when Islam is Pakistan’s state religion. The ruling PML(N) has been under siege ever since its leader Nawaz Sharif was disqualified over the Panama Papers leaks and had to go as Prime Minister. His successor, Shahid Khaqan Abbasi, blacked out private TV channels and social media to prevent live coverage of the Army action. We can’t say this was unwarranted, as we know from our 26/11 experience nine years ago how terrorist handlers benefited from the live coverage. Airing the crackdown could well have further inflamed passions instead of dousing the flames.