Opinion   Edit  27 Nov 2016  A revolutionary who was a global legend
Opinion, Edit

A revolutionary who was a global legend

Castro defied 10 US Presidents, then went on to shake hands with Bill Clinton and Barack Obam. 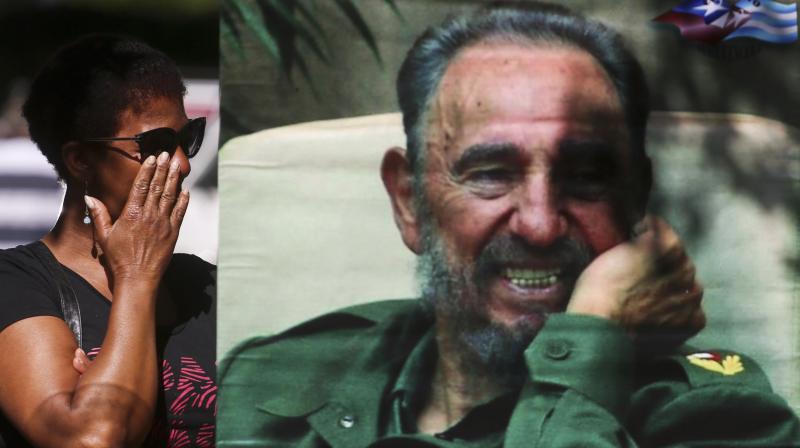 A woman cries next to a Fidel Castro banner displayed outside Cuba's embassy in Santiago, Chile. (Photo: AP)

Clad in military fatigues and chomping eternally on a cigar, “El Commandante” was a captivating figure right upto the day he became too ill to continue as Cuba’s leader. He lived on eight years more as a figurehead to 90, having survived imprisonment by Fulgencio Batista in the 1950s, 1961’s Bay of Pigs the Cuban Missile Crisis the following year and numerous attempts on his life, some quite bizarre, by America’s CIA. He defied 10 US Presidents, then went on to shake hands with Bill Clinton and Barack Obama, striking a concord with the latter to liberate Cuba from five-decade-long strained ties with the US. His contribution to the world went far beyond the confines of a tiny island just 150 km away from Florida, once a playground of rich Americans which he turned into an icon of anti-capitalism.

Castro was not just a revolutionary icon, he helped spread the Marxist doctrine to Latin America, the mesmeric hold of ideology and its champion surviving well for at least a couple of generations. As a leading figure of the non-aligned movement, the Cuban’s influence was felt across the world, including India, where he was a revered figure for decades. His taking on the might of the United States, withstanding its trade embargoes and economic sanctions, made him a hero to many in the world who regarded the US as a big bully. It may have taken more than idolatry to listen to his long winding speeches stretching for hours, but they came from a man with remarkably undiminished fervor.

Castro said presciently in April that a time would come for us all, but the ideas of Cuban Communists will remain as proof that all material and cultural goods people need could be fought for with dignity. He sent Cuban doctors around the world to tend to the poor and upheld the most idealistic of socialist principles by giving his countrymen, regardless of race, a quality education, food and housing. Cuba’s system of producing doctors was considered so good that American students came there in waves to take advantage of low costs.

It’s quite another matter that the revolution couldn’t last as the Soviet Union collapsed and with it billions of dollars in preferential trade and subsidies vanished. Castro’s socialist economy began to feel the pressure of shortages and the winds of change couldn’t be blocked forever, nor the march of faith into a land of official atheism. No one could stop time, but Fidel appeared to defy it, being the longest-serving head of state who was not a royal) before handing over to brother Raul, who too is now on the verge of retirement. Marxism’s appeal is dimming, but one of its champions will be remembered for his effervescent crusade.