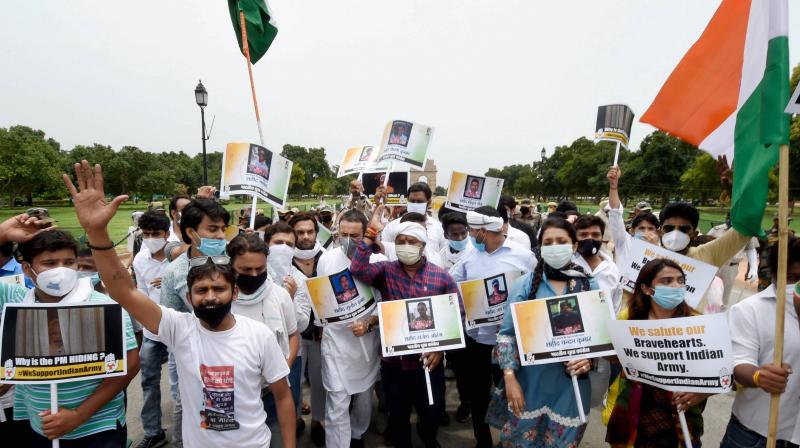 While Prime Minister Narendra Modi insists that there has been no incursion, reports on the developments on the border tell us a different story. PTI Photo

The attacks by the Bharatiya Janata Party (BJP) and the National Democratic Alliance (NDA) government it heads on the principal Opposition party, the Congress, with regards to the latter’s relations with the Communist Party of China (CPC) and the contributions the Rajiv Gandhi Foundation (RGF), headed by Congress president Sonia Gandhi, received from the neighbouring country, smacks of an attempt to stifle legitimate voices that are critical of the government.

The BJP president, J.P. Nadda, and Union law minister Ravishankar Prasad say the reported Chinese contribution of US $300,000 to RGF in 2005-06 was a bribe to advance a free trade agreement with China; both of them question the legitimacy of a memorandum of understanding (MoU) the Congress and the CPC signed in 2008 on high-level exchange of ideas.

Mr Nadda goes to the extent of seeing a link between the Congress stand on the border skirmishes to the MoU and the contribution. The law minister wonders if the RGF violated the Foreign Contribution Regulation Act (FCRA), 1976, or whether the organisation had indeed informed the Union government of it as mandated under the law.

While the contribution to RGF is 15 years old, the MoU between Congress and CPC is 12 years old. It is understandable that the United Progressive Alliance (UPA) government the Congress headed could keep mum about the deals had they been on the wrong side of the law. But it is curious that the NDA, which fought Lok Sabha elections in 2014 and in 2019 against the UPA, never raised issue about them.

Equally curious is the fact that the NDA government, which had no qualms about setting investigative agencies on its political opponents, has not yet initiated an investigation into either of the deals.

As for Mr Prasad’s doubts, it should not be all that difficult for the law minister to check if the RGF had indeed violated laws.

It is interesting to note that the government offensive against the Congress has come after the Opposition party started asking uncomfortable questions on the incursions China’s People’s Liberation Army (PLA) made on the Indian borders which claimed the lives of 20 Indian soldiers, including the commanding officer of an infantry battalion.

The nation still has no clear idea of what has happened on the border.

While Prime Minister Narendra Modi insists that there has been no incursion, reports on the developments on the border tell us a different story.

It was also interesting to note that the BJP and most of the media, which would pounce on the Opposition if a junior functionary of one of its parties is quoted saying anything similar on Pakistan or China, chose to observe silence when the Chinese government and the media made a song and dance of Mr Modi’s statement.

If the government is serious about its allegations, then it should take the legal route to bring out the truth.

Without it, the whole exercise would be construed as an attempt to browbeat the Opposition through unsubstantiated allegations and innuendo and also to divert people’s attention from its failure on communicating properly on the border developments.